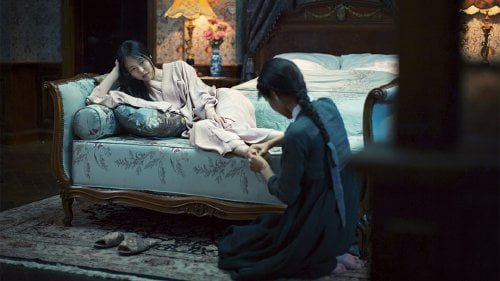 In a 1930's Korea under Japanese colonial rule, con man Count Fujiwara (Jung-woo Ha, "The Chaser") hires Korean pickpocket Sookee (Kim Tae-ri) to get a job at the secluded estate of the fragile Lady Hideko (Kim Min-hee, "Right Now, Wrong Then"). The Count plans to marry her, rob her of her inheritance and lock her away in a madhouse, but things get complicated when Lady Hideko falls in love with "The Handmaiden."

Lush, kinky, twisty and erotic, writer/director Park Chan-wook springs back from his gorgeous but emotionally anemic "Stoker," returning to the warped mind games, three act structure and cephalopod mollusc of "Oldboy." Chan-wook replaces the Victorian England of Sarah Waters' novel 'Fingersmith' with 1930's Korea, but retains both in Ryu Seong-Hee's ("Oldboy," "Mother") outstanding production design. We're introduced to Sookee in a literal den of thieves, her female boss salivating over Fujiwara's offer, but rejected in her favor. After a long journey, she arrives at the remote, multi-winged estate of Kouzuki (Cho Jin-woong), a Korean now naturalized Japanese who loves British architecture and Japanese simplicity, but above all, his extensive library of rarities. She's met by mysterious housekeeper Madame Sasaki (Kim Hae-sook, "Thirst," shades of "Rebecca's" Mrs. Danvers), who shows her to her sleeping place, a Japanese style closet outside of Hideko's door, the better to deal with her new mistress's night terrors. Within hours, she's comforting the young woman, stunned by her beauty. As Sookee learns of Hideko's awful existence (she's been imprisoned in her uncle's house all her life, forced to read to him daily and is intended to become his wife), her sympathy - and lust - turn toward the young woman, but when Fujiwara arrives, she dutifully attempts to convince Hideko to accept his proposal. The innocent Hideko agrees on one condition - that Sookee accompany her - and the three make their escape during Uncle's absence. You won't believe what happens next. The second part of the film gives us the same time span from Hideko's point of view and if you think Chan-wook's lesbian eroticism pushes the envelope, Chan-wook has more surprises awaiting, including the horrific contents of the basement Hideko whispers of in fear. An abbreviated Part Three updates us on the fate of the main three protagonists, part rapture, part torture. "The Handmaiden" is just a delirious cinematic experience, its lurid story presented with sumptuous craftsmanship, the score evocative of British period dramas. Kim Tae-ri's open beauty is matched by the actress's down-to-earth portrayal of a thief with a conscience and Kim Min-hee's porcelain refinement makes for an intriguing contrast. They just might be this year's sexiest couple. (The film also stars "Oasis's" Moon So-ri as the ghost of Hideko's aunt.) "The Handmaiden" is one hothouse of an art house thriller, a sensual and cruel vision from a director at the top of his game. Grade:

Walking out of “The Gunman,” I had the strong feeling I had seen the film before. And, I had in such films as “The Equalizer” and “John Wick” and others. The difference is the lead characters in the latter two films garner your sympathy as a good guy righting wrong. Jim Terrier, a murderous gun for hire, does not get that sympathy as he goes about offing the legion of killers sent to assassinate him. There is an effort to humanize Jim with his estranged girlfriend Annie (Jasmine Trinca). After he pulled the trigger years before, he asked his handler, Felix, to take care of her. Little does he know that this was Felix’s plan all along to get Terrier out of the picture so he could have Annie for himself. But, this romantic reunion is merely a distraction from the routine battles between Terrier and the aforementioned legions. Sean Penn really buffed and bulked up for his action figure role (his biceps deserve their own billing) and the actor does a credible job with the physical demands of his character. Unfortunately, director Pierre Morel (“District B13” and “Taken,” both first rate action thrillers) is hampered by the script, by Don Macpherson and Pete Travis (adapting the Jean-Patrick Manchette novel The Prone Gunman) that is too obvious in its formula. It is telling that I figured out who the real nemesis is less than 20 minutes into the film – and proved right. The cast is first rate even if their characters are not. Javier Bardem, Idris Elba, Ray Winstone and Mark Rylance are given roles not far from mere cameo. Due must be paid to the exotic locations selected as back drop, though why Jim has to hop around Europe and Africa to find the traitor is never really clear. (Except, maybe, to be able to travel to the said exotic locales.) “The Gunman” does not hold up well to scrutiny as it rehashes subjects done better in other films, including Morel’s first two features.