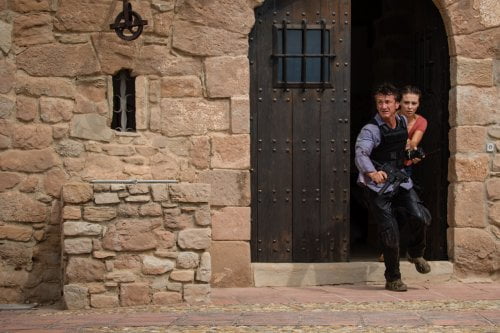 Jim Terrier (Sean Penn) was the trigger man in the assassination of the Minister for Mining in the Democratic Republic of the Congo. Because of repercussions, he must go into hiding. Eight years later, he is doing humanitarian work in the DRC when he is singled out for an attack by gun and machete wielding killers. Terrier saves himself but must go deep undercover to find out who wants him dead in “The Gunman.”

Years after being part of a mercenary operation which assassinated the DRC's Minister of Mining and forced him to leave the country, Jim Terrier (Sean Penn) is back, busy assuaging his guilt as an aide worker drilling wells when his past comes back to haunt him. Leaving for London to trace his old team in an attempt to find out just who's trying to kill him, Jim discovers that Felix (Javier Bardem, "No Country for Old Men"), the man who promised to look after his lover while also sealing his fate, is now married to Annie (Jasmine Trinca, "The Son's Room") and has more betrayal in mind for "The Gunman." Is Sean Penn trying to impress fiancee Charlize Theron or something? The 55 year-old actor's ripped bod is on display here far more than his screenwriting skills (and far more than I ever can recall in any other film). It's clear Penn, who cowrote with Don MacPherson (1998's "The Avengers") and Pete Travis ("Dredd"), is at least trying to say something about relief work in third world countries, but the film slips so quickly into generic thriller mode it feels like it mutated in post-production. Ade Oyefeso has a prominent role as Terrier's NGO protege Eugene only to disappear from the film without a trace. The only thing anyone will remember of this is that it was directed by "Taken's" Pierre Morel, drawing countless comparisons between Liam Neeson's aging action hero and Penn's role here. "The Gunman" is a love triangle that quickly reverts to a couple, albeit one strained by revelations from the past which has them on the run. After his London jaunt finds Calvary leader Cox (Mark Rylance, "Intimacy") having gone from 'killer to cashier,' Jim looks up his old pal Stanley (Ray Winstone, "Edge of Darkness," "Noah") for travel documents to get to Barcelona, where Cox has told him Felix, the man who chose him to pull the trigger, now resides. A night in a pub ends in a brawl that has Terrier diagnosed with something that looks like early onset Alzheimer's but is a post-concussive condition that will worsen under stress (sure, let's thrown in a bit of "Memory of a Killer" while we're at it!). Everything blows up in Barcelona, before Jim and Annie move on to Gibraltar (shadowed by Stan) to reengage with Cox (and yes, you know he'll be popping up again as soon as you meet him) in a bull ring. There are explosions, car crashes, gun fire, torture, beatings, eye gougings, bull gorings and Idris Elba ("Thor," TV's 'Luther') popping up as an Interpol agent. The whole thing will be forgotten an hour after you leave the theater. Since he won his second Oscar for 2008's "Milk," Penn's only taken three lead roles, only one of which was in a good movie (the little seen "This Must Be the Place," in which his Robert Smith inspired rocker hunted down a Nazi war criminal). He's better than this which makes "The Gunman" all the more depressing for his hand in having made it. Grade:

Walking out of “The Gunman,” I had the strong feeling I had seen the film before. And, I had in such films as “The Equalizer” and “John Wick” and others. The difference is the lead characters in the latter two films garner your sympathy as a good guy righting wrong. Jim Terrier, a murderous gun for hire, does not get that sympathy as he goes about offing the legion of killers sent to assassinate him. There is an effort to humanize Jim with his estranged girlfriend Annie (Jasmine Trinca). After he pulled the trigger years before, he asked his handler, Felix, to take care of her. Little does he know that this was Felix’s plan all along to get Terrier out of the picture so he could have Annie for himself. But, this romantic reunion is merely a distraction from the routine battles between Terrier and the aforementioned legions. Sean Penn really buffed and bulked up for his action figure role (his biceps deserve their own billing) and the actor does a credible job with the physical demands of his character. Unfortunately, director Pierre Morel (“District B13” and “Taken,” both first rate action thrillers) is hampered by the script, by Don Macpherson and Pete Travis (adapting the Jean-Patrick Manchette novel The Prone Gunman) that is too obvious in its formula. It is telling that I figured out who the real nemesis is less than 20 minutes into the film – and proved right. The cast is first rate even if their characters are not. Javier Bardem, Idris Elba, Ray Winstone and Mark Rylance are given roles not far from mere cameo. Due must be paid to the exotic locations selected as back drop, though why Jim has to hop around Europe and Africa to find the traitor is never really clear. (Except, maybe, to be able to travel to the said exotic locales.) “The Gunman” does not hold up well to scrutiny as it rehashes subjects done better in other films, including Morel’s first two features.