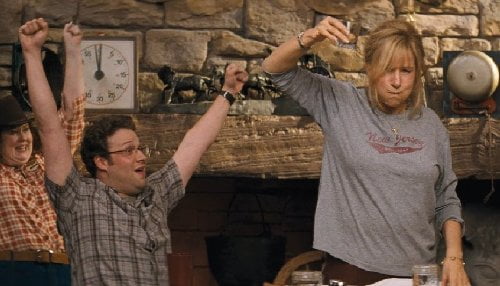 Andy Brewster's (Seth Rogen) about to make a cross country trip meeting with retailers to try and sell the safe and organic cleaning product he's developed down to his last $700 and it's going to start on the opposite coast in New York. That's where Andy's mother Joyce (Barbra Streisand) lives and the phone calls begin to escalate as his departure grows closer. Andy is surprised, though, to learn a secret from his mother's pre-marriage past about the love of her life who he has just learned he was named after. And so Andy locates the man who might deflect his mother's stifling attentions, adds a fake meeting in San Francisco to his itinerary, crosses his fingers and invites her along on "The Guilt Trip."

Screenwriter Dan Fogelman ("Crazy, Stupid, Love.") has written a rather unique buddy road movie based upon his own experiences (the film is dedicated to his mom, Joyce), but the underlying plot propping up all the wonderful character comedy will surprise no one. Still, this one works because of the great pairing of Streisand and Rogen and the genuine warmth Streisand brings to the vehicle. Thankfully, director Anne Fletcher ("Step Up," "The Proposal") doesn't push the Jewish mother cliches into schtick, even though Barbra's character is constantly fussing over her boy. Streisand has been beautifully photographed, looking at least 10 years younger with startlingly blue eyes, and the impression she gives is casual and soft, not necessarily the way we're used to regarding her, at least her screen presence. On the flip side, I don't recall hearing that distinctive Rogen laugh once in this comedy. That's because Andy is a bit dour, a really smart guy with a masters in chemistry who hasn't been able to capitalize that into success. He doesn't have a girlfriend. He's put a wall up against his mom's fussing and doesn't want her to know he's not really standing on that pedestal she's put him on. He's patient, but condescension and some eye rolling slip out with exasperation. Andy's no sooner in New York that he discovers he'll be dealing with his mom's group of friends over dinner ('But I made so much chicken!). He receives only praise, but is prodded about his love life and tended like a child. Meanwhile Joyce is a constant whirl, the type of woman one imagines talks to herself. She's triumphant over bargains, but not at the expense of quality ('I bought turkey bacon because it was on sale but I know it's still good.') It's no surprise that Andy's first meeting, with K-Mart buyers, is a disaster. He's no pitchman, but of course he waves aside mom's suggestions and we know this knowledgeable consumer is going to be the one to get him to succeed. But Joyce isn't always right, like her insistence that a sub compact will ride well in bad weather, and so the duo get stranded at a Tennessee strip club when something goes wrong in a snowstorm. Pushed further, Andy's forced to call the ex-girlfriend (Yvonne Strahovski, TV's 'Chuck') mom won't give up on only to suffer the discomfort of her revealing that he once proposed while ensconced in her and her obviously successful husband's (Colin Hanks, "The Great Buck Howard") cushy home. This episode causes Andy to rebel forcefully against mom at the worst possible moment, during a meeting with a Costco buyer. Some aggressive drinking ensues on both sides after Streisand delivers her showstopping speech about just how aware Joyce really is of her son's bad behavior. The film begins to turnaround here, especially when Joyce decides to take on the 50 oz. steak challenge in Texas to save her son some cash ($100 or free if you consume it along with a baked potato, salad, roll and shrimp cocktail) and ends up winning an admirer, Ben (Brett Cullen, "The Dark Knight Rises"). There's another slight dip of disillusionment when Andy comes clean about San Francisco, but the film ends in just the right place. "The Guilt Trip" is enjoyable as a collection of small moments and character quirks and real insights into parent/child relationships. Streisand and Rogen's off the cuff riffing feels easy and natural, right through end credit extended scenes (at a live satellite Q&A following the screening the two confirmed they went off script a lot, although Fogelman's mom really ate that steak. And then there was Streisand's story about smoking pot with Peter Sellers and taking a road tip with Marlon Brando!). Given the right vehicle, Barbra's still quite capable of driving even if she prefers to ride shotgun these days.