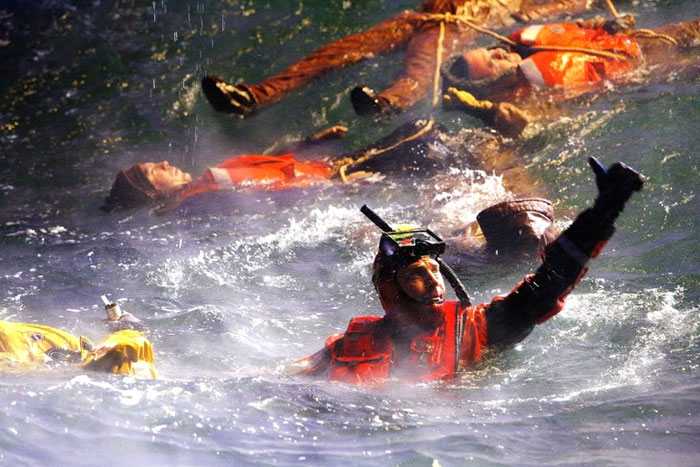 Senior Chief Ben Randall (Kevin Costner) is the most highly decorated of the US Coast Guard’s elite search and rescue teams. His last mission ended with disaster when his entire crew was killed in an aborted life-saving mission. Haunted by the tragedy, Ben reluctantly agrees to take over the Coast Guard’s training school to teach the next generation of rescue swimmers. One of his new wards is cocky young hotshot Jake Fischer (Ashton Kutcher) who Ben must mold into one of the best of the best in “The Guardian.”

When legendary Coast Guard rescue swimmer Ben Randall (Kevin Costner, "Open Range") survives a disastrous mission which takes the lives of his helicopter crew and best buddy, his commanding office, Capt. William Hadley (Clancy Brown, "Bad Boys"), sends him to train at the "A" school to get over the psychological blow. Randall's unique methods challenge his class of recruits to the max, but one, Jake Fischer (Ashton Kutcher, "A Lot Like Love"), puzzles Ben. When Jake's motivation is revealed, Ben takes a strong personal interest and Jake comes to revere his teacher as "The Guardian." Screenwriter Ron L. Brinkerhoff takes the standard issue military teacher/recruit template of "An Officer and a Gentleman" (among others) and fleshes it with the little known world of Coast Guard rescue swimmers, yet while the film's cliches are obvious, director Andrew Davis ("The Fugitive," "Holes") nonetheless delivers a compelling film studded with several amazingly realistic rescue sequences. Costner's grizzled stoicism is more of a natural for Randall than Kutcher's cocky jock is for Jake, but the two gradually mesh into a believable mentor/student team. The film establishes Randall's expertise with a rescue which will foreshadow one of his recruit's breakthrough moments when he's forced to punch out a man who is drowning his wife in his desperate effort to survive. A tired Ben returns home to discover his wife, Helen (Sela Ward,"The Fugitive"), in the process of moving out. Ben, of course, is married to the Coast Guard and even as he pleads with her his pager goes off, calling him back to the mission which will lose him even more. Arriving in Louisiana (Ben's stationed in Kodiak, Alaska), Randall's warmly greeted by Capt. Frank Larson (John Heard, "Pollock," seemingly wearing the same blue contacts that made Maria Bello look like an alien in "World Trade Center"), but his drill second in command, drill instructor Jake Skinner (Neal McDonough, "Minority Report"), bristles at Randall's hard core methods. At a school where only 50% make the grade, Ben loses a recruit on day one by having them tread water for an hour and teaches them about hypothermia by making them experience it. Jake, a high school swimming champion, is determined to prove himself better than his teacher, but Ben calls him out as a guy only interested in breaking records rather than saving lives. Jake's past, though, holds a tragedy very similar to what Ben's just gone through and the two ending up bonding over a beer and a bar fight. When Jake graduates, he stationed to Ben's base and although the conclusion can be seen like a beacon, Davis stages it in two heart stopping action sequences. Costner gets the job done and even pulls the heart strings when he sees his wife for the last time, combining the athleticism on display in his many baseball flicks with the watery emotions of "Message in a Bottle" and the stoic heroics of "Open Range." Kutcher cannot overcome the initial miswriting of his character, but he's charming enough in his subplot pairing with local teacher Emily Thomas (Melissa Sagemiller, "The Clearing") and is physically believable for the strenuous and daring action. Only one other recruit, Brian Geraghty's ("Art School Confidential") Billy Hodge, makes any real impression and Geraghty is too meek as a guy determined enough to be going through his third try at "A" school. The recruits' continuity suffers as well, when a prominently lone blonde female is shown as one of the remaining group but disappears and is replaced by a lone African American woman. St. Louis jazz and blues singer Bonnie Bramlett (TV's "Roseanne") provides the requisite gruff humor and warmth as the mother hen of Maggie's Bar. Cinematography, production design and special effects are all top notch. "The Guardian's" tank shot water heroics are head and shoulders better than anything seen in "The Perfect Storm" and their gripping execution will leave the viewer with a new found respect for the extraordinarily brave men and woman of the Coast Guard's rescue teams. Editors Thomas J. Nordberg and Dennis Virkler also lend tension to the Coast Guard Operation Center scenes, heightening the drama unfolding before them and us. "The Guardian" may be textbook and go overboard with its attempt at supernatural myth-making, but Davis has grounded his film with enough unheralded heroics to make it work.

Director Andrew Davis’s latest effort begins with the story of the legendary man who lives in the see, a man who mysteriously saves those stranded in the deadly wasteland of the sea. Cut to married couple washed overboard from their boat. Ben heads the mission to save them and proves, once again, that he is the best at his craft and brings the pair, after a struggle with the husband, to safety. On their next mission, the rescue team nears the limit of their fuel and Ben must decide whether or not to save some stranded mariners. He chooses to make the daring save but things go terribly wrong and he, alone, survives the catastrophe. Ben’s commanding officer, Captain Bill Hadley (Clancy Brown), gives him a choice – resign, with honors, or take over the Coast Guard’s rescue school. He takes the latter but with the stipulation that he be allowed to run the “A” School his way to make his students into his image. His biggest challenge is Jake Fischer, a champion swimmer who makes it his goal to break all of the records held by his new teacher. Ben must transform Jake and the rest of his classmates into being integral members of the Guard’s most elite corp. No one is going to accuse scripter Ron. L. Brinkerhoff of originality in his screenplay that derives from such flicks as “Top Gun,” “Heartbreak Ridge,” “The Right Stuff” and “An Officer and a Gentleman.” But, to the scribe and director Davis’s credit, “The Guardian” is a well crafted and exciting old-fashioned story that combines harrowing rescue action with romance, teamwork and a man with a troubled past. Kevin Costner would appear to be getting too old for this kind of stuff but the actor, early on, establishes Ben Randall as a seasoned rescue specialist who is dedicated to the saving of lives. After his tragic last mission he agrees to become the top instructor at the Coast Guard’s rescue school, rubbing his subordinates the wrong way with his tough, unconventional training methods. Costner takes the challenge of the physicality of his role and creates a believable character in Ben Randall. And, in a surprising performance, Ashton Kutcher does a creditable job as the full of himself trainee, Jake Fischer. The young actor has never impressed me but, under Andrew Davis’s firm hand, Kutcher fills his bill well. The rest of the cast is given little by way of character development with Brinkerhoff’s script and, instead of fleshing out the supporting roles, the other classmates and colleagues are merely faces surrounding Ben and Jake. There are a couple of exceptions with Brian Geraghty, as three time rescue candidate Charlie Hodge, and Emily Thomas as Jake’s love interest, Melissa, called upon to give a 3-D face to the stick figure supporting cast. The real draw to “The Guardian” are the exciting and well-done rescue scenes that do a fine job of showing the dangers and demands that the men and women of search and rescue must face on a daily basis. These unsung heroes have been given short shrift by Hollywood with only “The Perfect Storm” and “The Guardian” depicting their death-defying craft. Andrew Davis and his crew, using a giant water tank to create the rescues, do a marvelous job making the missions look real and believable. The movie really makes you wonder at what drives these dedicated folk to put their lives on the line to save others and succeeds in delivering the goods. Their motto, “So Others May Live,” really hits home by the end of “The Guardian.” The Guardian” is rife with its derivativeness and stereotypical characters as it follows the by-the-numbers script. But, in this case, that is not such a bad thing, especially with Costner’s focused, well-defined performance. Techs are solid across the board and help the viewer suspend disbelief, as a good movie should. This is a real crowd pleaser, done with the full cooperation of the US Coast Guard that should do well in the theater and beyond.