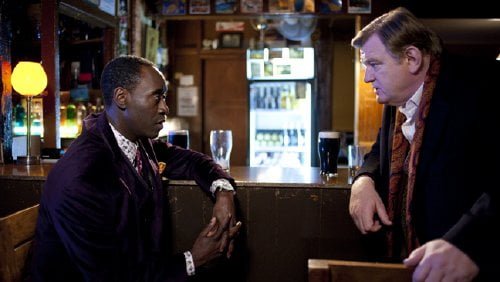 Sergeant Gerry Boyle is a small-town Irish cop with a confrontational personality, disdain for authority and a keen sense of humor. He loves his dying mother, has a predilection for prostitutes and just wants his life to go on as it is. However, a shipment of cocaine, estimated at $500000000, will be landing on the coast of Connemara and Gerry and by-the-book FBI agent on the case, Wendell Everett (Don Cheadle), have to join forces against both drug-smuggling criminals and corrupt cops in “The Guard.”

In the western County Galway, Sergeant Gerry Boyle (Brendan Gleeson, "In Bruges") marches to his own drummer. So when he's paired with over-eager Dublin transfer Garda Aidan McBride (Rory Keenan), his sarcasm sounds more biting. Then the Connemara coppers are hit with the FBI's Agent Wendell Everett (Don Cheadle, "Talk to Me," "Iron Man 2"), a serious sort on the trail of a half billion dollars of cocaine. Everett initially doesn't get Boyle's cheeky sense of play ('I thought only Black lads were drug dealers.'), but when he's partnered with him, his initial annoyance segues into curious contemplation of "The Guard." Writer/director John Michael (brother of "In Bruges'" Martin) McDonagh makes his feature directing debut with this tale of criminals, corruption and double crosses that's breezy on a surface buoyed by strong under currents. If you can imagine the whimsicality of "Local Hero" crossed with the dark, British Isle ruralness of the "Red Riding" trilogy if its criminal elements had immigrated from "Fargo," you'll have an idea of McDonagh's deft tonal touch. Gleeson, in one of his best roles, keeps the audience guessing via Wendell's point of view. After weathering Boyle's barb's at Inspector Stanton's (Gary Lydon) mandatory briefing, where Boyle IDs his John Doe murder victim as one of Everett's four dealers, Everett rides back with Boyle and just doesn't know what to make of the man who cherished a solo trip to Disney World. Wendell posits that Boyle is either the smartest or dumbest man he's met as Boyle grins agreeably. The next day he's nonplussed to observe Boyle swimming along the frigid coastline in a wetsuit and is told over breakfast that his local partner came in fourth in Olympic swimming. Is his leg being pulled? When Wendell uses the word 'we' as he outlines the day's detecting chores, Boyle is dead serious when he tells him that it's his day off, one which has been booked for a while. In two scenes, McDonagh's crafty screenplay has essentially foretold his twisty climax, although one cannot know this until the story has played out. Everything spirals from Boyle, a man who treats himself to two hookers at a time in a posh Galway hotel, who dotes on a dying mum (Fionnula Flanagan, "The Others," "Kill the Irishman") whose predilection for Russian literature reflects back onto her son and whose relationship with local criminals is unorthodox to say the least. Young Eugene Moloney (Michael Og Lane), a Protestant lad on a bike, appears to have a little of the Catholic Boyle in the making and the two have a most humorous understanding. Wendell's opposite nature makes him a great comic foil to Boyle as well as providing the fish out of water on the seashore humor. The film is awfully funny, but like his brother's "In Bruges," it also has notes of melancholy and brutal, murderous realities. In addition to the odd couple chemistry of Gleeson and Cheadle, the film's trio of villains all add something to the mix. Liam Cunningham ("Centurion," "Clash of the Titans") is the local boss, Sheehy, whose criminal exploits are his way of coming up in the world. He's the easy-going pragmatist and Cunningham kills obsessing over the 'creepiness' of 'Ode to Billy Joe' playing on a jukebox (as does McDonagh, an ambiguous song again commenting back upon his own work). His lackey Liam is a self-described sociopath and David Wilmot's (SHOtime's 'The Tudors') mug shot alone brings a laugh. Go-to-bad-guy Mark Strong ("Sherlock Holmes," "The Eagle") is the intimidating Clive Cornell. In one scene Pat Shortt makes his mark as the somewhat befuddled IRA weapons smuggler Colum Hennessey. Katarina Cas is a mysterious hanging thread as widowed Visa beard Gabriela McBride. When one steps back and looks at the throughline of "The Guard," one can recognize the story as something one has seen before. But it's the way McDonagh tells it that makes it such a unique journey with a strong sense of place. There are many things in common between "The Guard" and "In Bruges," not least of which is star Gleeson. What would happen if these brothers teamed up? They could become the Irish Coen brothers.

First time feature film writer-director John Michael McDonagh (brother of Martin McDonagh, “In Bruge”) creates a whimsical character in Gerry Boyle who has to change his life direction in order to do the right thing and stop the aforementioned criminals and crooked cops. He is always the cynical policeman who eschews authority, especially those that outrank him. Brendan Gleeson gives a fine character study with Gerry having an amusing arc, even when things go bad Things start off normal enough for Sergeant Boyle, in the beginning of “The Guard,” as he sits by the side of the road and watches a car full of drugged up and drunk young men speed by weaving all over the road. He does nothing but sip his coffee as we hear an awful crash. It is just another day in his life – until he is called in to investigate a murder. Thus, the action begins and from here on in Gerry’s mission is to stop the massive drug smuggling operation. He discovers, though, that it is not just criminals he is dealing with. He also faces the fact that his superiors have their hands in the half billion dollar pie. The only one he trusts is American FBI agent Wendell and Gerry knows that, if he goes against his corrupt superiors, he is a dead man. Brendan Gleeson gives a slightly off-kilter performance as Sergeant Boyle, happy in his own world where, on his day off, he has a fantasy tryst with two prostitutes. The arrival of half a bill in cocaine on his doorstep, with its ensuing mayhem, is more a nuisance than anything else for Gerry and, since he trusts no one except for Wendell, the issue is simplified and he goes on a one man (with backup) campaign against the bad guys. McDonagh’s screenplay combines the overall drama of finding the smugglers and stopping them with some very wry humor, mostly from Gleeson, with his irreverence toward any authority. Don Cheadle plays Boyle’s straight man as by-the-book Wendell Everett who succumbs to Gerry’s oddball charisma. The supporting cast is full of character actors who flesh out the background but only to two dimensions. The character study by Gleeson, though, is the draw for “The Guard.”