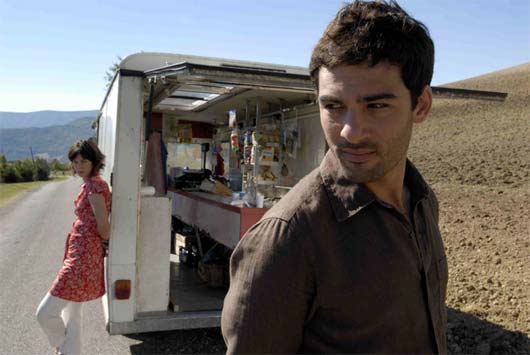 Antoine Sforza (Nicolas Cazalé) is a thirty-year-old living in a small unfurnished Lyons apartment when his country parents reenter his life. Dad (Daniel Duval, "Caché," "Time to Leave") is in the hospital and Mama (Jeanne Goupil) cannot both run the family grocery store and the traveling van which delivers to remote regular customers. With friend and neighbor Claire (Clotilde Hesme, "Love Songs"), whom Antoine wishes were more, he travels to his birthplace where he will learn to be a man as "The Grocer's Son."

Cowriter (with Florence Vignon)/director Eric Guirado proves that not only can you go home again, but you can learn new tricks there with this charming tale of a man finding his humanity by performing a familial obligation. "The Grocer's Son" is like "Local Hero" where a place's undiscovered charms have been masked by the resentments which grow between a son and his father and older brother. The rudderless Antoine is clearly looked down upon by his father while older brother François (Stéphan Guérin-Tillié), who never left the Rhône-Alpes countryside, chafes beneath the responsibilities his young brother has no part of. Mom believes in her younger son, but Antoine's surly nature makes his initial outings in the grocery van less than successful. It's not until he's accompanied by Claire that he can begin to see the humor in the eccentricities of his country neighbors, like Lucienne (Liliane Rovère, "Le Souffle," "You Are So Beautiful"), an older woman of dubious hair color who cherishes her Fernet Branca, a 40% alcohol herbal-based digestif. Claire is with him, though, to write an essay in the country quiet as a requirement for acceptance at university. Entrusted with posting it, Antoine makes a selfish choice. Guirado's gentle pacing suits his material and he's assembled a large cast who seem perfectly embedded in their environment. Cazalé is darkly good-looking in a rugged way which suits both his initial storminess and his eventual embracement of his heritage. His may be a sentimental character arc, but Cazalé earns it. Clotilde Hesme is unusually lovely and plays Claire with a sort of removed warmth. Benoît Giros ("Indigènes") plays a nice counterpoint to Antoine as Fernand, the friend who stayed but dreams of leaving who views his pal as a 'city slicker.' That Antoine's customer base is an aging one speaks of changing times and underscores the loss of a beautiful way of life. The character actors who play them, like Paul Crauchet ("Le Cercle Rouge"), are all wonderful. "The Grocer's Son" is a small film of simple pleasures which may lack the star power or story hook to attract much of an audience, but it's well worth the effort. It's the type of film that may convince you that life could not be sweeter than selling groceries by the side of the road in Provence.