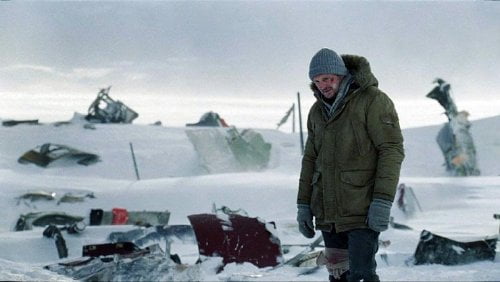 A group of natural gas rig roughs are rotating out of their bleak Alaskan “home” and heading back to civilization. They are a jovial bunch, partying hardy on board their chartered flight, until disaster strikes and the plane crash lands miles from anything or anyone. The seven survivors must band together if they are to make it out alive. But, they do not just have the harsh elements to contend with when they land amidst a pack of very hungry wolves in “The Grey.”

John Ottway (Liam Neeson) works for an Alaskan oil refinery as a sharpshooter, keeping the oil rig workers safe from from the area's dangerous wildlife. But Ottway's lost his own will to live, having recently lost his beloved wife (Anne Openshaw). When the plane transporting him and his coworkers back to Anchorage for some time off goes down in a frozen wasteland, Ottway's survival instincts kick in to protect the group of men left alive, but before they've even left the crash site, the men are threatened by "The Grey." Cowriter (with 'Ghost Walkers' author Ian Mackenzie Jeffers)/director Joe Carnahan has had an up and down career, squandering early promise with misfires like "Smokin' Aces" and "The A-Team." With "The Grey," he continues to frustrate, mixing cliches and now-they-look-real-now-they-don't wolves with some deep existential ideas and individual set pieces. Neeson continues his late relaunch as an action star with his gruffest, most intriguing turn as a man both suicidal and spiritual, guided by the poetry of his late father. Carnahan sets a dark mood right at the onset as Ottway stays with the majestic animal he's just shot as its life drains away. The man appears to be a loner and his internal narration is that of a man with nothing left to live for, so we can feel his inability to deal with a chatty seatmate. Carnahan then delivers one of the most suspenseful buildups to a plane crash ever, a group of tough guys trying to mask their fear with bravado as their transport is buffeted about in a storm. Ottway embraces death by imagining his wife, beckoning beneath the sheets, but she's pulled away in a blast of light as the plane breaks apart around him. This is some heady filmmaking. Ottway immediately assumes a leadership role as he finds himself unharmed and begins to check the wreckage. The usual assortment of 'types' are assembled, and just when we think we might be getting into "Alive" territory (the film about the soccer team that went down in the Andes who resorted to cannibalism), a nonhuman predator is discovered in a grisly tableau. The big Arctic wolves Ottway had been tasked with keeping away are approaching, sensing weak prey, and he doesn't have his gun. After assembling the group who will all represent something - Diaz (Frank Grillo), the grizzled criminal who will challenge Ottway's authority; Hendrick (Dallas Roberts, AMC's 'Rubicon'), the quiet ally; Burke (Nonso Anozie, "Rocknrolla," "Brighton Rock"), the guy with the medical condition, etc. - Carnahan pulls his first inexplicable move by having Ottway instruct the men that a line of trees on the horizon will protect them. But the expert is dead wrong. And so they face challenges both from nature and of their own making, including crossing a deep chasm on a line that's right out of "Cliffhanger." Still there's something to be said for the film's natural authenticity (the film was shot under extreme conditions) and the way Carnahan provides a spiritual flourish to each man's death. Sound is integral to the piece, the growling of wolves amplified, the snap of tree limbs, the quiet muffling of snow. If only his group weren't both so individually symbolic and so difficult to distinguish (the film also stars an unrecognizable Dermot Mulroney, Joe Anderson ("The Ruins"), Ben Hernandez Bray ("Limitless") and James Badge Dale (AMC's 'Rubicon')). "The Grey" is a mixture of melancholy machismo and every man against nature film you've ever seen, but Carnahan hits some nice notes. Neeson really works the ending, which is sure to divide audiences - stick around for a final filip after the credits roll.

Writer-director Joe Carnahan mans the action helm once again with this by-the-numbers man-against-nature 10-little-indians survival tale based on the short story, Ghost Walker, by Ian Mackenzie Jeffers. I kept thinking of the 1997 survival flick, “The Edge,” with Anthony Hopkins, while watching “The Grey.” The differences between the two – seven survivors instead of two and a wolf pack versus one very large and very angry grizzly bear – are about all that make this Liam Neeson actioner different from the better former film. The seven-little-indians plot line becomes obvious early on in “The Grey” once the threat of wolves is introduced and the first victim falls to the alpha wolf. The film then becomes a scorecard of who is next on the alpha male’s hit list and how can this generic group of guys possibly survive? You pretty much know what is going to happen – after all, we are dealing with a bunch of hungry wolves and on their turf - but, I have to admit, I gave a surprise chuckle with the finale. Liam Neeson, Dermot Mulroney, Dallas Roberts and the rest of the cast do their best with the wooden, clichéd script but none achieves anything more than two-dimensional characters. The production, set in the bleak Alaskan wilderness, does a fine job in conveying the numbing cold, hardships and dangers the crash survivors must endure. The titular characters, the wolves, are present via CGI and the result is shoddy and tacked on. When we do see the pack during the light of day – we mostly see them in the dark with just their shining eyes giving them away – they vary in size from one scene to another. Editing is manic during the wolf attacks so we never get a clear view of the men’s adversaries. “The Grey” is a typical winter film release. There is little new competition and the 2011 year end releases have just about run their course so the market is fertile. Unfortunately, this one is too by-the-numbers and unoriginal to garner a recommendation.