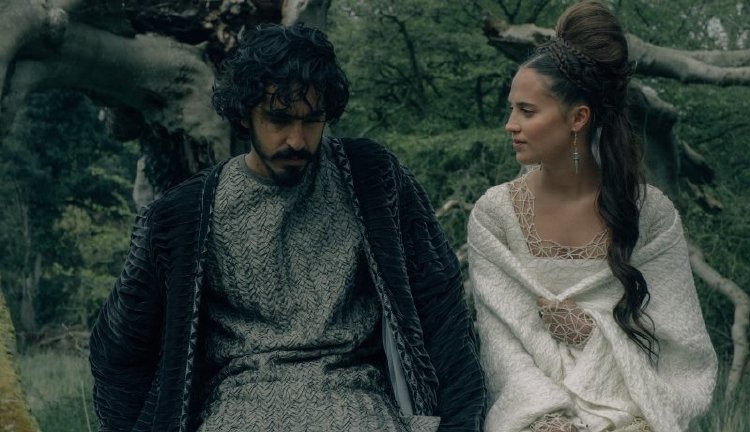 On Christmas morn, Sir Gawain (Dev Patel) awakens with his lover Essel (Alicia Vikander) after an evening of debauchery.  Although Essel got him to Church, his mother, sorceress Morgan le Fay (Sarita Choudhury, "A Hologram for the King"), none too pleased with his carousing lifestyle, conjures up the arrival of a being who will test his honor, chivalry and loyalty, “The Green Knight.”

Writer/director David Lowery ("A Ghost Story") has taken an unusual approach adapting the 14th century poem ‘Sir Gawain and the Green Knight,’ one in which a magical quest feels so surreal and slow it is like it is taking place underwater (which it actually does at one point).  You need to allow yourself to just drift along with it and be patient, because he pulls everything together in one big climactic rush during the film’s last fifteen or so minutes.  “The Green Knight” is the type of film which gains stature as you turn it over in your mind after the fact, its misty tendrils enfolding you in deeper understanding.

After being berated by his mother, Gawain gathers with his uncle, King Arthur (Sean Harris, "24 Hour Party People"), Arthur’s Queen, Guinevere (Kate Dickie, "The Witch"), and his knights to celebrate Christmas, making excuses for his mother’s absence.  She is off elsewhere, blindfolded and casting a spell which arrives in the form of a letter along with the towering Green Knight (Ralph Ineson, "The Witch"), whose booming arrival signals his size and whose face is that of the legendary Green Man, a pagan god.  He challenges anyone to strike him a blow with his mighty ax should they be willing to undergo the same in a year’s time.  Gawain, who has unexpectedly been seated at his uncle’s side, the King expressing regret for not knowing him better, accepts.  But once beheaded, the knight is not felled, instead merely picking up his head, placing it back upon his neck and exiting with the words ‘One. Year. Hence.’

Befitting his Middle Ages setting, Lowery uses the spinning, seasonal background of a puppet show to illustrate the passage of a year (later, 360 degree camera movements reflecting that spin will signify the same).  Also reflective of the time, cinematographer Andrew Droz Palermo (“A Ghost Story”) uses the chiaroscuro lighting of a Rembrandt painting, his interiors dark, his exteriors featuring the gloomy greens and grays of a December landscape.  Small openings high on stone walls provide focused beams of light, something which comes magically into play later with a Camera Obscura used to capture Gawain’s likeness.

After being outfitted in chain mail by his female family members, Gawain sets off wearing a belt his mother has embedded an amulet in, saying it will protect him.  But he quickly loses both it and his steed when he runs into a deranged highwayman (Barry Keoghan, “The Killing of a Sacred Deer,” a standout) at the devastating aftermath of a battle.  On foot, he’ll meet a lady, St. Winifred (Erin Kellyman, "Solo: A Star Wars Story"), when he sleeps in her bed, having assumed the home vacant.  As it turns out, he’ll learn his assumption was correct when she makes a most unusual request, one which he honors.  A fox becomes his traveling companion and he’ll witness an eerie parade of giants, but his last stop at the castle of Lord Bertilak (Joel Edgerton, “King Arthur’s” Gawain), who insists Gawain rest for a few days as the Green Chapel is less than a day’s ride away, will see him sorely tempted by its Lady (Vikander).  They are oddly joined at mealtimes by an old woman with long gray braids and a blindfold, the latter detail a connection that only we, the audience, might make.  After absconding with the bell given him by Essel, the Lady will gift Gawain with a book and a belt, one, she says, which will protect him.

Lowery’s adaptation changes some details (Morgan Le Fay was Gawain’s aunt, not his mother, in the original poem, for example) and adds many but it is his handling of Gawain’s final appointment with the Green Knight that makes his film soar, the consequences of Gawain’s slowly paced quest and his final actions a climactic crescendo.  Where Tipperary’s Cahir Castle stood in for Camelot, the Green Chapel is a moss covered ruin, beautifully realized.  Also notable are Malgosia Turzanska’s ("You Were Never Really Here") costumes, utilizing rough weaves and the colors of natural dyes.

“The Green Knight” initially finds Sir Gawain a bold young man with no tales to tell.  The knight we leave has one worth experiencing multiple times.

I was a blank slate going into “The Green Knight,” Oh, sure, I know about the King Arthur legends and the famous round table of his loyal knights. But, this story, about a challenge by a giant green knight to the court of king, is a new one to me.

After I watched this odd Arthurian legend unfold, I knew I was entering uncertain territory as this tale centers on Sir Gawain’s (Dev Patel) assigned test of courage and honor. The king’s nephew accepts the challenge: the green knight will offer his neck to the first to agree to deliver the killing blow, if that challenger will submit his neck to the same in a year and a day.

Gawain, not wanting his liege lord to take the challenge, volunteers and hews the head from the knight’s body. The body picks up the severed head and, speaking to the assembly, reminds of the appointment in the Green Chapel. What follows are the somewhat truncated adventures of Gawain and his quest, culminating in his arrival at the castle of a welcoming lord and lady. They wine and dine him and give him refuge as he prepares to faces his greatest challenge.

Director David Lowery takes this 14th century Arthurian legend and, from what I can tell, gives a fair adaptation of the source material. While moments in Gawain’s journey are given shrift, like a procession of passing giants in an ethereal fog, few other details are brought to light. The highlight begins after he enters the lord’s (Joel Eggerton) castle and the story enters a new dynamic.

I was not really prepared for what “The Green Knight” had in store so I let the tale wash over me. It is an intriguing story not of bravery but of finding that bravery and living a chivalric life of honor.