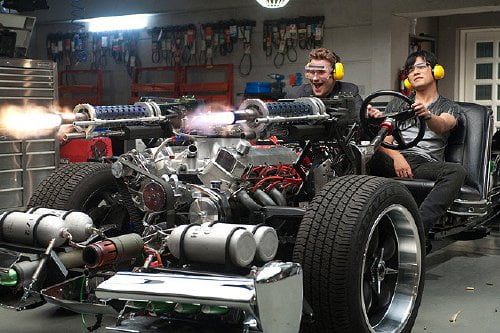 As a child, Britt Reid (cowriter Seth Rogen, "Pineapple Express") was treated harshly by his media mogul dad (Tom Wilkinson, "In the Bedroom"), but when James Reid dies, his Daily Sentinel is left in the hands of an oversized adolescent. Britt is all about nothing but hedonistic pleasure and he goes on a tear when his morning coffee suddenly sucks. Advised that he fired his late dad's entire staff the previous day, Britt discovers his father's mechanic, Kato (Taiwanese pop singer Jay Chou, "Curse of the Golden Flower"), was the coffee maker and hires him back. Then Britt discovers that Kato not only makes great coffee, but the device that brews it, and is introduced to the outrageous inventions he's added to James's fleet of vintage cars. After one outing together where the duo inadvertently run into and take out a gang of thugs, Britt decides to reinvigorate the Sentinel with a mystery of his own making - "The Green Hornet."

Seth Rogen's pet project has been on a bit of a roller coaster ride of expectations. First it got bad buzz when Sony moved it from a December to January slot. Then things looked up when reports of good test screening results started to come in. Well, thanks guys, for raising hopes because "The Green Hornet" might have played marginally better if expectations had been let alone. Following the same basic outline as the hugely superior "Pineapple Express" (an overgrown, unambitious man child pairs with a more 'focused' individual who raises his game and gets inadvertently involved with criminals, falls out with new buddy, then rejoins forces in time for a big climactic shootout in a warehouse work space), "The Green Hornet" enjoys a few giggles courtesy of a James Franco cameo and Christoph Waltz ("Inglorious Basterds") as a villain with an unpronounceable name, but director Michel Gondry ("Eternal Sunshine of the Spotless Mind," "Be Kind Rewind") fails to find any tonal throughline or save Rogen from his lesser instincts. This is also the most heinous, nonsensical use of 3D yet, a hollow cash grab that makes 2010's "Clash of the Titans" almost look reasonable. Jay Chou is actually quite appealing as Kato, both a buddy and rival to the Hornet, especially once Britt hires Lenore Case (Cameron Diaz) as his Sentinel secretary, a move that brings out the sexist in Rogen and the sexiness in Chou. The obviously bright Lenore is used to 'research' the Hornet to give the guys a game plan. It's Britt's big idea to make the Hornet (named by Kato after 'the Green Bee' is proposed by Britt) a seeming villain who is actually a hero. Chudnofsky (Waltz), L.A.'s biggest crime boss, wants to remain the 'scariest' despite his unflashy wardrobe and lack of one liners. There's also DA Scanlon (David Harbour, "Revolutionary Road"), a seeming friend whose unseemly background, once disclosed, redeems Reid senior in junior's eyes. The film's biggest conflict, though, is between the inept Hornet and Kato, the creator of the Black Beauty (a heavily tricked out 1960s Chrysler Imperial) and its backups and a martial arts master. Kato is the brains AND brawn of the outfit and the Hornet is, well, annoying. It's difficult to find the Gondry who directed "Eternal Sunshine" amidst this mess. There's one surreal flashback on a balcony that provides a whiff, but everything else is of the crash-whiz-bang school of filmmaking. "Express's" big finale was character driven whereas "Hornet's" is all about driving a car through plate glass. Sushi USB drives and lame 'Kato vision' are not the stuff dreams are made of. A slimmed down Rogen gains no empathy as a character who rebels against rich daddy by living in his pool house partying with bimbos, then as boss salivates over his secretary. Diaz, whose older age is used for jokes ('36? Maybe we need to build a ramp!'), is no Pepper Potts. Waltz sets a scaled back tone that works until Rogen's script (written with "Express" partner Evan Goldberg) forces him to assume an extremely unfunny persona. Wilkinson and Edward James Olmos ("Stand and Deliver," TV's 'Battlestar Galactica') as dad's former right-hand man are utterly wasted in material beneath them. Edward Furlong ("Terminator 2: Judgment Day") manages to make an impression as a meth lab operator in one scene. Chou not only walks away unscathed, but is responsible for just about anything left that's good in this movie. "The Green Hornet," whose theme appears like a straggler after more soundtrack saleable tunes from the likes of the Rolling Stones and Johnny Cash, isn't a reimagining it's an ill considered regurgitation.