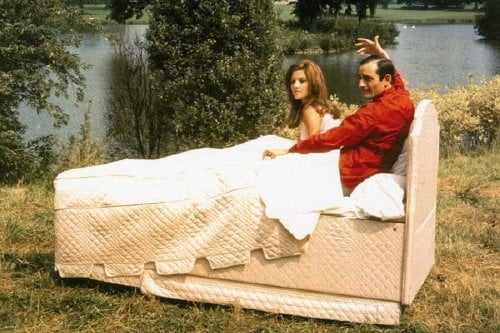 “The Great Love,” released a few years after “The Suitor (1962),” represents a leap forward for the comic French filmmaker Pierre Etaix. “The Suitor” is an homage to (and mimicry of – not a bad thing) the great French comedian Jacques Tati and his wonderful, near silent works. “The Great Love,” though, can be looked on as a maturing in film storytelling and filmmaking. His 1969 film is a full-fledged romantic comedy and fantasy and, I believe, his first film in color.

Pierre (Pierre Étaix) enjoyed lady love Irene from a very young age, then added Martine to the mix as a young man, but when he was introduced to Florence Girard (Annie Fratellini, "Zazie dans le métro"), he found "The Great Love." After experiencing Etaix's first feature which was near dialogue-free, it's a bit of a shock to watch his fourth, which begins with near constant narration as cowriter (with Jean-Claude Carrière, "The Discreet Charm of the Bourgeoisie")/director/star Pierre Étaix sets up his own character's back story. But the humor is here from the beginning, with third early girlfriend Therese introduced as a convent girl and left behind as a girl gone bad, a montage to a few sentences of Etaix's voice over. In another bit of classic comedy, Etaix frustrates a café waiter (Claude Massot, his dad in "Le Soupirant") with his demands for indoor and outdoor seating changing on the whims of his women. This was the director's first film in color and both the French New Wave and the Swinging 60's show their influence. And yet we can still see in this more worldly Pierre the romantic fantasist of 1962's "The Suitor," especially when he flies away with Agnes on a bed which hits the road in what appears to be a spoof of Godard's "Weekend." Etaix riffs on several things here - the concept of the woman trapping a man into marriage, complete with the job at the father-in-law's (Louis Maiss) firm (a tannery). As the year's go by, boredom settles in for Pierre, hastened by the close proximity of his in-laws (they live downstairs) and the horror of seeing his wife in her mother (Ketty France, "Playtime"). Add mother/daughter phone calls, usually with bad romantic timing, and Pierre's eye has started to wonder. It is just at this moment that his senior secretary Mme. Louise (Jacqueline Rouillard, "The Bride Wore Black") introduces the young fetching redhead, Agnès (Nicole Calfan, 1973's "The Three Musketeers"), who will be taking her place. Etaix, though, flips convention on its head with his Greek chorus of gossips (Gossip #4 is played by Denise Péronne who played his mother in "The Suitor") who tear down the happiness of his marriage in the early days as we're shown a montage of wedded bliss. Gradually they begin to witness the truth (a reach back to silent slapstick as repeated meetings with a woman in a park ends up in a bush), although misinterpretations are rife and add to the comedy. In one scene, Pierre gets advice on how to woo Agnes from Jacques (Alain Janey, "As Long As You're Healthy") and their playacting, including a hilarious dancing lesson, is gobbled up by with mistaken relish by a spying gossip. If his first film started strong and dipped, this one remains more consistent, although it suffers in its second stretch in the same way, with a hoary gag sequence (the earlier, a distracted tea service, the latter, the old sawing possessions in half gag). Once again, though Etaix proves he knows how to end on a high note, notably again at a train station.

“The Great Love” is a mid-life crisis kind of film as, years before, Pierre (Pierre Etaix) courts Florence (Annie Fratellini), the only daughter of a wealthy businessman. They fall in love, get married and Pierre begins working for his father-in-law. 15-years later, he is in charge of the company and, now middle-aged, he begins to have regrets overt how his life gone – like being monogamous with Florence who, increasingly in Pierre’s mind’s eye, resembles her mother (Ketty France). Enter his new secretary, Agnes (Nicole Calfan), pretty, young, single and naive. Pierre’s life becomes a fantasy in his dreams and daydreams as he tries to find a way to have his proverbial cake and eat it, too. Director and co-writer Etaix (with co-scribe Jean-Claude Carriere) does a fine, funny job in his commentary on modern marriage (at least, marriage in late 1960s France) and infidelity and the damaging power of gossip. He also does a great job with buddies. Pierre and his best friend Jacques (Alain Janey) are long time confidants and he turns to his friend for help with his crisis – stay in an unfulfilling marriage or begin an affair with Agnes. The scenes where Jacques acts out what Pierre needs to say and do, in public of course – like dancing, hand-holding and wooing a woman - are hysterical, especially when they are seen by a neighborhood gossip-monger. “The Suitor” and “The Great Love” are two very different films by Pierre Etaix and they have whetted my whistle to see more of his works. Amusingly, in both films, automobiles are very important in the art and production design and say something about the personal tastes of Pierre Etaix. These two works are diamonds in the cinematic rough where talented filmmakers fade from public attention. Thanks to the Museum of Fine Arts in Boston, these and three other of Etaix’s film, plus a couple of his short films, are being shown in a week-long retrospective. Catch it if you can.