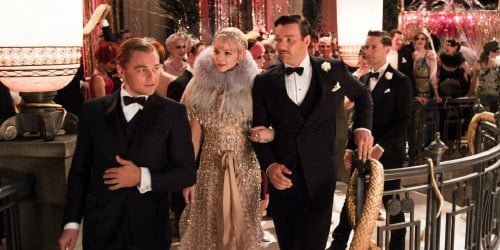 When fledgling bond trader Nick Carraway (Tobey Maguire, 2002's "Spider-Man") leaves the city to take a summer cottage on a Long Island bay, he finds himself living next door to a mysterious, party giving millionaire. Nick befriends the man and learns that he wants to reconnect with Nick's cousin Daisy Buchanan (Carey Mulligan, "Drive," "Shame"), who lives with her husband across the bay. Nick arranges the meeting which will result in tragedy for "The Great Gatsby."

There has never been a successful adaptation of F. Scott Fitzgerald's classic about a poor man's starry eyed vision of his future scuttled by the decadent, corrupt and uncaring behavior of the very rich and there still isn't. Cowriter (with "Moulin Rouge!'s" Craig Pearce)/director Baz Luhrmann ("Australia") wants to dazzle you with razzle, make you swoon over the gauzy glory of paperbook romance and hit you over the head with Fitzgerald's symbols if not his themes (except for one - 'You can't repeat the past'). It's a shame, really, as Leonardo DiCaprio is a great Gatsby. Luhrmann mostly sticks to Fitzgerald's text, although he's concocted a bookending device which finds Nick in a sanitarium (which looks a lot like the Buchanan estate left to run to seed) diagnosed as a 'morbid alcoholic' among other things. Dr. Walter Perkins (Jack Thompson, "Breaker Morant," "Australia") suggests writing, Nick's former dream occupation, as therapy, and off we go into a land of too much narration by the cast member least able to do it justice. And so through Nick's eyes we meet his second cousin, first identified by the huge rock on a hand that flutters over a settee in a room enveloped by sheer, flowing panels. He finds her in need of reassurance of her status as the 'golden girl,' understood when luncheon is continually interrupted by calls from husband Tom's (Joel Edgerton, "Warrior") mistress. Nick is dragged into Tom's affair with Myrtle Wilson (Isla Fisher, "Wedding Crashers"), the wife of garage owner George (Jason Clarke, "Zero Dark Thirty"), another marriage failing because a woman's expectations are not being met by her husband. He is then surprised to be perhaps the only person ever to be officially invited to one of Gatsby's lavish all night parties, where he runs into Daisy's friend, pro golfer Jordan Baker (Elizabeth Debicki), then meets the man himself. Luhrmann revels in the artificiality of his landscape, overloading on crane shots, CGI and 3D which accentuates vast quantities of confetti (turned to sanitarium snowflakes). Flashy cars don't travel along sparsely trafficked roads so much as ricochet "Speed Racer" style through way too many obstacles. Gatsby's mansion looks like the Disneyland castle and most of its flowers are a garish blue and purple. Only once, in a nighttime depiction of Times Square, does Luhrmann's garish aesthetic work. Gatsby is first fully seen set against a fireworks display set to Gershwin's 'Rhapsody in Blue,' but the soundtrack is mostly anachronistic from will.i.am's Charleston appropriation 'Bang Bang' to a new interpretation of 'Love Is the Drug' from Bryan Ferry. (Lana del Ray's 'Young and Beautiful,' the movie's main theme, could stand out at year's end as a Best Song nominee.) Luhrmann's wife Catherine Martin's production and costume design waver between just right and too over the top, although Daisy's chandelier gown, which she wears for her first visit to Gatsby's and a simple boat neck sweater and linen pants for Jay are outstanding work. Luhrmann does slow down his hyperkinetic visual style for the film's second half, where Daisy resumes her affair with Gatsby before utterly failing him. But even here, the director cannot mine the necessary emotion and tragedy from his cast and the adaptation seems to highlight inconsistencies in Fitzgerald's text (which we have plenty occasion to read, Nick and Gatsby's handwriting superimposed in 3D like a Hallmark card with a parchment overlay). And still, DiCaprio finds Gatsby's essence, even if his interpretation is sometimes too childlike, his repeated 'Old Sports' too obviously an ill-worn affectation. One wishes he could redo this role with frequent collaborator Martin Scorsese. Carey Mulligan looks the part as much as her costar, but despite some charm, she's too opaque, neither the tragic heroine nor gold digger often ascribed to the character. Anything we can dig out about Daisy is told to us rather than portrayed by the actress. Tobey Maguire acts by popping his eyes wider, his delivery grating. Edgerton is too brutish. Jason Clarke and Isla Fisher are underdefined and too modern. Debicki makes a noteworthy debut, making Jordan so cool for the room her attention is a gift, but Jordan's only around as a conduit who adds nothing to social observation of the privileged, the character's defining cheating at golf scene missing. Bollywood star Debicki Amitabh Bachchan adds the right note of dangerous dealings as Gatsby associate Meyer Wolfsheim. Luhrmann's "The Great Gatsby" begins like a cartoonish harassment then turns into a Vogue spread before shining that damned green dock light in our eyes. It is an occasionally inspired, more frequently not, novelty item that swamps its one star turn.