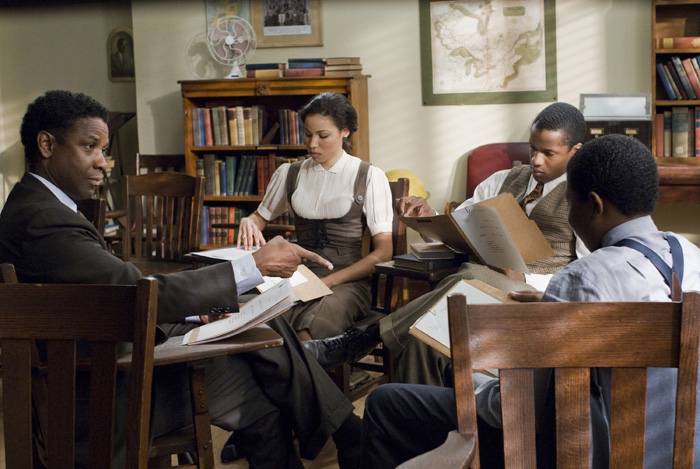 In 1935 Melvin B. Tolson (Denzel Washington) was a labor activist and Speech and English professor at the all-black Wiley College in Texas. His passion for the spoken word is so profound he recruits the best students and creates the school’s first debate team, a team that will go on to do verbal battle with the cream of the crop at Harvard University in “The Great Debaters.”

Denzel Washington, in his sophomore directing effort (his first was 2002’s “Antwone Fisher”), shows a firm hand with the adapted screenplay by Robert Eisele from his story with Jeffrey Porro (from the Tony Scherman article). Washington is the star of “The Great Debaters” but the helmer gives his costars – Forest Whitaker, Nate Parker, Jurnee Smollett, Denzel Whitaker (no relation to Washington or Whitaker) – equal shrift in this inspirational period story. Melvin Tolson was ahead of his time as both educator and union activist as he toiled to unite the local workers and his students into cohesive forces of both labor and education. His passion for debate, though, prompts him to audition Wiley College students to form the school’s very first debate team. Tolson weeds through the applicants and finally selects three special students – firebrand Henry Lowe (Nate Parker), the son of the school’s president, James Farmer, Jr. (Denzel Whitaker) and a talented young woman, Samantha Booke (Jurnee Smollett) – to represent the school. The Wiley debaters hone their skills and, after a rough start, begin to win against the competition. Tolson’s grand plan is to bring his savvy team to the Holy Grail – the competition against the best, the Harvard University debate team. Remember, this is back in 1935 and the Civil Rights movement is but a dream for America’s black population so the educator faces enormous social obstacles to make his vision come true. Through Tolson and his team’s hard work and dedication, the obstacles are broken down, culminating in the film’s big finale, the debate with Harvard that is broadcast to radios across America. Inspirational movies, of both body and mind, have been with us almost as long as the movies have. True life sports story’s, like “Friday Night Lights,” “Glory Road” and “Rudy,” show that the underdog can become the top dog if the players believe in themselves and each other. Others, like “A Beautiful Mind,” hit home that one could overcome any obstacles, including mental illness. “The Great Debaters” combines the inspirational movie types into a story that is about team spirit and faith that will end in Tolson’s team becoming true winners. Washington has obvious talent as a helmer, having learned from the best over his long career, and shows assurance in telling the story about Tolson and his debate team and their trials and tribulations. However, he also delves into the social fabric of the South circa 1935, showing the prejudice and violence of the time toward himself and his students. This makes “The Great Debaters” more than just an inspiring film. It is also a history lesson about an America that is at the dawn of social change where equality is no longer judged by skin color. The helmer balances the two themes into a unified whole. Having a major movie star as the film’s director shows a degree of clout in recruiting a top-notch behind-the-camera crew. Lenser Philippe Rousselot captures the look and feel of the time. Original music by James Newton Howard and Peter Golub adds to the inspirational tone of “The Great Debaters.” Production design by David J. Bomba, art direction by John R. Jensen and costume design by Sharen Davis all lend to the film’s verisimilitude. The Great Debaters” is a good movie but hard pressed to garner award consideration against the outstanding competition of the 2007 movie year. Nonetheless, it should find a solid audience with its inspired story and attractive cast that will do well with younger auds, too.