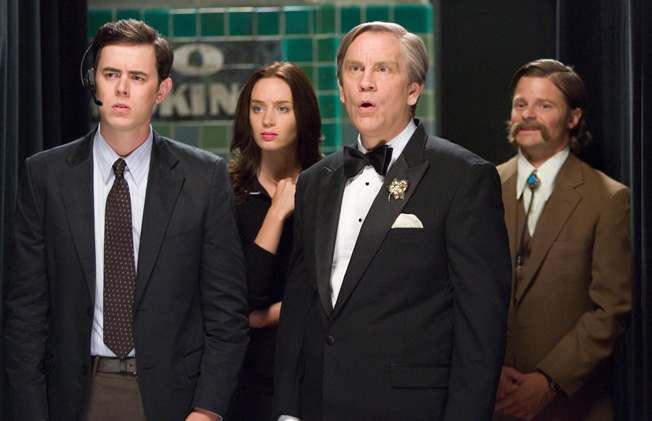 Troy Gable (Colin Hanks, "Orange County," AMC's "Mad Men") wants to be a stream roller driver, an astronaut, anything but the lawyer his father (Tom Hanks) wants him to be. Troy caves, but is so miserable at law school, he quits to become a writer without telling dad. Realizing he still needs to pay the bills, he peruses the want ads and one to become an assistant to a show biz legend that he has never heard of catches his eye. Troy decides this is the life experience he needs and when disillusioned dad next meets up with his son, he finds him catering to the needs of "The Great Buck Howard."

Writer/director Sean McGinly ("Two Days," the 2006 HBO documentary "Brothers") fashions a fictional homage to The Amazing Kreskin, a mentalist still making news if not filling seats in Vegas, with a two-pronged and double-directioned approach to the 'realizing your dream' theme. Centered by a blissfully egotistical performance by John Malkovich, arrestingly attired by costume designer Johnetta Boone ("The Notebook"), "The Great Buck Howard" is a sweet, nostalgic film. When Troy meets up with Howard's manager, Gil Bellamy (magician and David Mamet regular Ricky Jay), it is obvious that he has this new job as soon as he's walked in the door. Soon he's on the road, being 'trained' by Howard's current, much maligned, assistant Alan (Adam Scott, "Knocked Up," "Step Brothers"), who's fired before Troy is up to speed. No matter, as Troy is more than capable of demanding Buck's dressing room perks, prepping the small town theaters where he appears, and taking verbal abuse for over and under tipping hotel staff. Despite Howard's delusions of grandeur ('I appeared on the Tonight Show with Johnny Carson 61 times.'), Troy is charmed by the mentalist (distinctly *not* a magician) and fascinated by his most famous feat - finding his cash fee hidden in the audience at the end of each show. As Buck travels throughout small town America, greeting each with "I love this town!," (and being greeted by a series of overweight, middle-aged women), Troy learns that Buck's view of the world is as retro as he is (Howard drops names not heard for twenty years) and that he has a serious hangup with his 'former good friend' George Takei (in a running gag, Troy is alternately asked by strangers about how Buck performs his trick and whether he is gay). Just when Troy is slipping into a routine, Buck informs him that he will unveil a new feat at an upcoming stop in Cincinnati (Ohio loves him), one that will catapult him back into the national spotlight. And here is where the film bogs down a bit. Although McGinly takes Buck Howard where he wants to go in an around about way, he also introduces PR woman Valerie Brennan, a fill-in Buck thinks is beneath him who thinks she should be repping a top star. Nothing wrong with the character, who also serves as a romantic interest for Troy and the connective string to his ultimate end, but Emily Blunt, so wonderful in "Sunshine Cleaning," (and just about everything else she's done), just isn't right in this role. She's not bitchy or backstabbing enough and her chemistry with Hanks is fairly nonexistent. Also coming on board in Cincinnati are Debra Monk ("Palindromes," "The Savages") as the head of the local Red Hat Society chapter and her brother Kenny (Steve Zahn, "Sunshine Cleaning"), Buck's Limo-providing hosts for his stay. They're not well integrated into the story, although Zahn gives Kenny a sweet naivete. McGinley does do an amusing turnaround with Buck's big day (former Cincinnati mayor Jerry Springer and Entertainment Weekly are involved) that find Buck sitting next to the likes of Conan O'Brien (Jay Leno is still on his dissing list) and being given 'This is Your Life' treatment by Regis and Kelly. Colin Hanks is just right as the aspiring writer who recognizes the value of his employer. He's green and he's clean but he's no fool and he clicks with the outrageous Malkovich, who nails the self-involved loopiness of Buck Howard. The two share a terrific moment near film's end when the two are reunited, a wordless communication with professional guards down. Hanks Père lends his name to the cast and is, of course, just right playing himself (more or less. He also produces). Ricky Jay may work in Mamet movies, but he shows his lack of acting ability here and is a bit of stunt casting here. The production does a great job of nailing middle America and features cinematography by "The Silence of the Lambs's" Tak Fujimoto. "The Great Buck Howard" is a sweet albeit sleight tale of a young man beginning a career gambling on a chance that leads to happiness while his downsliding employer finds contentment and fulfillment with downshifted expectations. What it is not is the typical showbiz story.