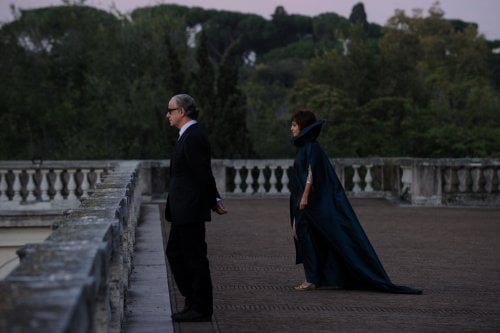 “To travel is very useful, it makes the imagination work, the rest is just delusion and pain. Our journey is entirely imaginary, which is its strength."

Céline's Journey to the End of the Night

As a female vocal ensemble performs David Lang's "I Lie" at the Fontana dell'Acqua Paola on Rome's Janiculum Hill, a Japanese tourist delights in snapping away at the views. A moment later he lies dead, overcome by "The Great Beauty."

Writer/director Paolo Sorrentino's ("Il Divo," "This Must Be the Place") latest has been described as an homage to "La Dolce Vita," but this film is more ambitious, the filmmaker not only preserving a cultural moment in time as experienced by a bon vivant journalist, but expressing the man's interior thoughts cinematically, a jaded man's ability to still experience the glories of life amidst a social circle defined by its depraved snobbery, ostentation and gossip.

Sorrentino uses a classic Hitchcock cut to transition from a horrified woman's scream at the tourist site to a wild party celebrating Jep Gambardella's (Toni Servillo, "Il Divo") 65th birthday on his rooftop terrace, a giant neon Martini sign standing in for the moon in the night sky. Jep, known as 'King of the High Life,' admits that the parties weren't enough, he wanted the power to make them fail. And as we follow Jep on his jaunts about Rome, time and time again we'll see him challenge pretension in art, politics and religion with amused detachment.

Within the sprawling cast lie three important women. Jep's current lover Orietta (Isabella Ferrari), is a soulless stunner whom he leaves without a word, having expressed earlier "I need more than beauty." A friend, Egidio (Massimo De Francovich), invites him to a club where he begs Jep to help find his stripper daughter Ramona (Sabrina Ferilli) a rich husband before her ability to support herself fades. Ramona may be the film's true beauty, a woman whose company Jep finds himself delighting in, despite the disapproval of friends who balk at her trashy apparel. The significance of the third is the most poignant, a long held passion only discovered after the woman's passing.

Sorrentino is an exceptional visual stylist and the imagery within this film is startling - a movie hasn't excited me with its unpredictable splendor like this since Leos Carax's "Holy Motors." Cinematographer Luca Bigazzi ("This Must Be the Place") uses pans, zooms, reflective extreme side angles, floating overheads and below ground shots to show us such glories as a man in an alcove lit like a Vermeer or giraffes and flamingoes who scatter with a breath. A funeral is staged as if on a couture show runway and Jep sees the sea in his bedroom ceiling (Ramona sees only plaster). Fellinesque visions include Lenora, a faded celebrity caught snorting cake in Jep's kithen, perhaps a stand-in for Rome itself, and Dadina (Giovanna Vignola), Jep's editor, is a pragmatic dwarf, but Fellini is not the only influence here. A cosmetic surgeon administering Botox injections in a surreal assembly line recalls "Brazil," while Jep's walk down a street lit with glowing lamps (featuring Fanny Ardant in a cameo) immediately plunged me into the world of "Eyes Wide Shut." Music, too, transports us while it often contradicts, a solemn church choir accompanying party goers watching a knife thrower.

As Jep begins to face some difficult truths, Sorrentino begins to peel back the facade. We see Count (Franco Graziosi, "We Have a Pope") and Contessa Colonna (Sonia Gessner) in their small apartment, receiving a call offering car service and 250 Euros for their appearance at a party and Jep's fledgling playright friend Romano (Carlo Verdone) scales back his lofty ideas to give a performance as the average man. But even the melancholy acceptance of our fates can have its own great beauty.

Jep Gambardella (Toni Servillo), many years ago, wrote his one and only novel. The book became a legend and it set him up for a life at the top of the social and literary circles of Rome’s rich and famous. He has lived a good life but, as his 65th birthday draws near, he begins to reflect on that life (and his loves) in “The Great Beauty.”

Director/co-scribe Paolo Sorrentino is no stranger to character studies in his films. In “Il Divo” he followed Giulio Andreotti (also played by Servillo) during his tumultuous waning years as prime minister of Italy, With “This Must Be the Place” he tells the story of a former rock star on a mission to avenge the humiliation of his father at the hands of a Nazi war criminal in the notorious concentration camp at Auschwitz. “The Great Beauty” is another character study, this time of his protagonist, the sophisticated Jep Gambardella.

Jep is beyond suave as he makes his way through the many parties that dot the nightlife of Rome’s wealthy. It is many years since his only novel was published but he has maintained his celebrity status in the highest social circles. Between the constant parties, Jep reflects on his life, questioning if he wants to continue his whirlwind existence.

“The Great Beauty” is more than just a character study, though. The film reminds of the surrealism of Federico Fellini and the visual style of Peter Greenaway. Sorrentino, who co-wrote the story with Umberto Contarello, takes these influences to create a visually splendid work. The excellent photography by Luca Bigazzi and gorgeous production design accentuate the study of Jep. The look of the film is truly beautiful.

Another aspect of the beauty of the tile is Jep’s romance with the daughter of an old friend. Ramona (Sabrina Ferilli) is a gorgeous 42-year old woman who has a career as a sophisticated stripper. She and Jep fall in love and, for a time, they have an idyllic romance. But life takes a sad turn for Jep when he loses his love. The chemistry between Jep and Ramona is palpable and this part of Gambardella’s life is yet another Great Beauty.

The story is a complex blending, telling the tale of Jep’s life and the fast-paced social world of Roma. Servillo is terrific as our protagonist, as is Ferilli as beautiful Ramona. Though the film centers on these two appealing characters, the enormous supporting cast flesh out the background with three dimensions. Director Sorrentino does an assured job in marshalling his actors and in telling Jep’s story.

“The Great Beauty” is Italy’s submission for best foreign language film and is one of the best of the year. It works on many levels including its excellent character study by Toni Servillo.