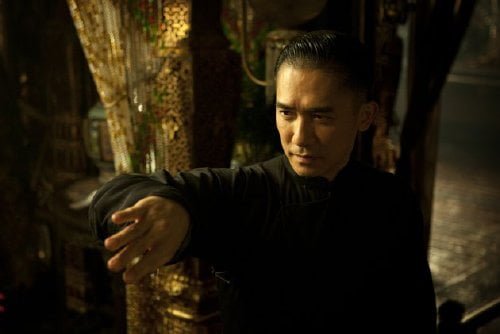 In 1936, the Japanese have invaded Manchuria and Grandmaster Gong Baosen (Wang Qingxiang), famous for combining the martial arts of Xingyi and Bagua, arrives in the Southern kung fu center of Foshan to celebrate his retirement with a challenge and a banquet. The wealthy son of exporting family, Ip Man (Tony Leung, "In the Mood for Love"), rises to the challenge, but Gong's daughter Gong Er (Ziyi Zhang, "Crouching Tiger, Hidden Dragon"), his successor in the skill of the 64 Hands style, won't let matters rest, and seeks to reattain her family's stature as "The Grandmaster."

Cowriter (with Zou Jingzhi and Xu Haofeng)/director Wong Kar Wai ("In the Mood for Love") is known for his love stories, so it is a departure to see him taking on martial arts as other Chinese directors, like Ang Lee and Zhang Yimou, have done before. Or is it? Wong travels far afield from the typical biopic structure, creating a balletic martial arts film (choreographed by Yuen Wo Ping of "The Matrix) split into two by both history and the women in Ip Man's life. The film has been cut from its 130 minute Chinese running time for Western audiences, making it difficult to tell if the dreamlike narrative, which is dominated in its second half by Gong Er's story, has lost something in translation. Still, "The Grandmaster" is stunning, the martial arts on display mesmerizing in their deconstruction, and the climactic battle for the Gong family legacy one of the most spectacular sequences of 2013. The film begins with the rain-soaked meeting at the Foshan Gate, Ip Man dapper in a white fedora (Wong reshot the entire fight to add that hat!). A kung fu battle ensues like some kind of Asian film noir meets "West Side Story," cinematographer Philippe Le Sourd ("Seven Pounds") making every rain drop count. We then hear Ip's account of the Golden Pavilion, a high class brothel where one 'enters a prince and exits a pauper,' and where the women may be versed in more than sexual arts. Ip is a family man proclaiming a strong, almost nonverbal bond with his wife Zhang Yongcheng (Song Hye Kyo), but the Golden Pavilion is where kung fu masters meet. Gong Er is surprised to find herself in a brothel, but she's there to defend family honor. Her challenge to Ip Man results in more than artistic tension and she surprises him when a submissive position ends with her being on top. He promises to visit her in the North, even having a coat made to resist the snowy weather, but the war intervenes. In the intervening years, Ip Man loses his wealth and a child and travels to Hong Kong to earn a living, leaving his wife behind. There he will find Gong Er, now practicing medicine, but she's made an oath to the Buddha to retain herself for her family's art and Wong knows his way around unrequited romance. But despite the fact that this film charts the life of Ip Man, who eventually opened up his secret art of Wing Chung kung fu with a school for the public where his most famed pupil would be Bruce Lee (seen as a young lad here), Wong gives more than equal weight to Gong Er, who is cast out of her family home by the orphan, Ma San (Zhang Jin), whom her father deemed his successor. Er's quest to unseat the Xingyi master will be her physical undoing, but it is the highlight of the film. Formally dressed in a long, fur collared coat, Er takes on Ma San at a train station in the snow and it's a thrilling set piece. Wong pays special attention to the slipper clad fighters' feet, sliding and finding purchase, like the stealth version of a boxer's dance. The editing of these scenes is tight, but the way the film is put together is a bit odd. There is a preponderance of title cards, introducing times and places and events and one specialized master after another, as if we couldn't follow the story without our hand being held (and perhaps we might not have). But when one expert is introduced twice within a minute or so of screen time, one wonders just how much Wong oversaw this cut. "The Grandmaster" can be a bit obtuse, but it has a melancholy beauty and deep respect for the skill of its martial arts masters.