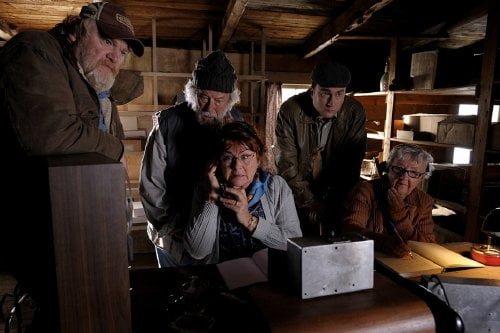 Murray French (Brendan Gleeson, "Edge of Tomorrow") fondly remembers how his fisherman father worked fourteen hours a day to provide for his family, but now he and the other residents of Tickleneck Harbor all receive welfare checks. With his wife having departed to St. John for work and an oil company's interest in building a repurposing plant dependent upon a resident doctor, Murray gets busy as the new mayor, targeting Dr. Paul Lewis (Taylor Kitsch, "Lone Survivor") for "The Grand Seduction."

So, why do we need a French Canadian English language remake of a 10 year old French Canadian film which itself was a cute but uninspired take on "Doc Hollywood" by way of "Local Hero?" Those who haven't seen "Seducing Dr. Lewis" may find Don McKellar's ("Last Night") film charming, and it does have its moments as Tickleneck residents 'stage' their own village, but those who haven't may be better off searching out the original. Check the link above for a plot synopsis, because screenwriter Michael Dowse ("It's All Gone Pete Tong") has changed little of Ken Scott's work, most notably widening plot holes into craters. What the new film has going for it is a lovely little lived-in location, amusing art direction and costume design and the performances of Gleeson, "Away from Her's" Gordon Pinsent as his best friend Simon and Mary Walsh as Simon's wife Vera. Kitsch is OK as the overly clueless doctor, but Liane Balaban's (2012's "Maniac") flint as his intended romantic interest isn't enough for him to spark from. Grade: