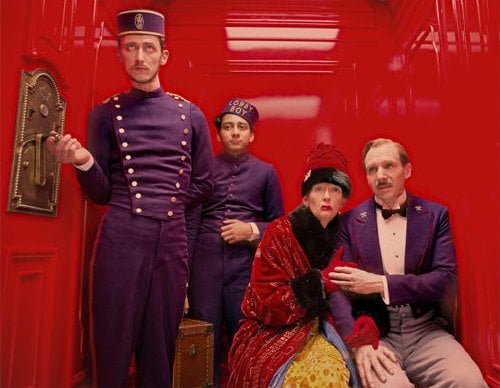 In 1985, an author (Tom Wilkinson) addresses us directly about his book, which, he says, was written exactly as it was told to him. Flash back to 1968 where the writer (now Jude Law), staying at a once glorious Eastern European hotel, becomes intrigued with a man sitting in the lobby. This turns out to be the hotel's owner, Mr. Moustafa (F. Murray Abraham), who takes us further back, to 1932, to tell the tale of how he came to own "The Grand Budapest Hotel."

The films of writer/director Wes Anderson ("Rushmore," "Moonrise Kingdom") are an acquired taste for many, his obsessively art directed worlds often viewed as a man constantly rearranging his own multi-level dollhouse. But his characters, usually played by a company of actors who've worked with him before, are often affecting - just look at Bruce Willis's lonely cop and the lovely preteen romance of "Moonrise Kingdom." So imagine my disappointment when Anderson's Berlin Silver Bear winner, with his largest ensemble to date, turns out to be peopled with characters as embalmed as the artifacts which surround them. There are pleasures to be found here, of course, but this film's romance between Mustafa's younger Lobby Boy incarnation Zero (Tony Revolori, "The Perfect Game") and Irish pastry chef Agatha (Saoirse Ronan, "Hanna," "The Host"), is sterile, and Anderson's most charming conceit, a collective of concierges called the Society of Crossed Keys (peopled with the likes of Bill Murray, Bob Balaban, Fisher Stevens, Owen Wilson and wooden actor/designer Waris Ahluwalia), is underutilized. The most intriguing character here is its central one, the Budapest's 1932 concierge M. Gustave, played with smutty fastidiousness by an actor new to Anderson's canon, Ralph Fiennes. He's a control freak in his standards of excellence, but also a a freak in the services he offers personally to guests - the gay concierge sexually services older women, notably the very wealthy Madame Céline Villeneuve Desgoffe und Taxis (Tilda Swinton, in astounding age makeup), with genuine affection. Madame D.'s death sets everything in motion. After hiring Zero on a trial basis, M. Gustave takes the earnest young man under his wing, and so sets off with him to Madame D.'s estate. After inspecting her corpse (approving of his recommended change of nail varnish), Gustave is pleased to learn she has left him a priceless painting, but her son, Dmitri (Adrien Brody), will have none of it. So Gustave enlists Zero's help in spiriting the art work away. This begins a series of adventures, including run-ins with border police (Edward Norton's Henckels), outwitting Dmitri's thug Jopling (Willem Dafoe, tricked out in leather and lower canines that make him look like a Nazi bulldog) and a prison escape orchestrated by lifer Ludwig (Harvey Keitel). Other than Keitel's Gustave, the only character with a beating pulse is the hotel itself (filmed at Castle Hainewalde and the German department store Karstadt). A grand castle set among mountains, it features a huge lobby, tiled spa, room sized elevator and an animated cutout(!) outdoor funicular, all shabbily redesigned for its 1960's setting. The small mountain town where it is situated is alpine kitsch, including a bakery where elaborate pastries are boxed in exquisite, beribboned packaging. Old world trains provide luxurious transportation. The period setting is outside of Anderson's usual New England realm, but while it is unmistakably his creation, one can sense whiffs of Guy Maddin in the air. (And speaking of scents, Gustave's essential L'Air du Panache has been manufactured by French boutique perfumery Nose.) Supporting players are so much art direction, from Brody's elaborately mustachioed Dmitri to Mathieu Amalric's goggle-eyed Serge. "Blue is the Warmest Color's" Léa Seydoux pops up as a French chambermaid of few lines. Anderson regular Jason Schwartzman is the current day's inept concierge M. Jean. Ronan inexplicably sports her native Irish accent. Jeff Goldblum is Deputy Kovacs, whose cat has a most unfortunate fate. Only Edward Norton evokes a sense of history to his character, his prior acquaintance with Gustave allowing the man some leeway. "The Grand Budapest Hotel" is a fitfully amusing cuckoo clockworks, but although its nostalgic yearnings for the craftsmanship of yesterday, a Sehnsucht, is palpable, it lacks the real heart found in Anderson's better works.

M. Gustave (Ralph Fiennes) is the longtime concierge at one of the famous luxury hotels in Europe. It is between the two world wars and Gustave maintains the lodge’s traditional high standards. When a longtime resident of the hotel, Madame D (Tilda Swinton), dies, he learns that he is in her will, giving him a priceless painting. The madam’s greedy family, though, will not relinquish the precious art, leading to hijinks that will have Gustave and his Lobby Boy, Zero (Tony Revolori), race across Europe to evade arrest in “The Grand Budapest Hotel.” One thing is for sure: Wes Anderson is a man who makes his films his way. Going back to his debut, “Bottle Rocket,” and his amazing follow up, “Rushmore,” he has stayed true to himself ever since. Some of his works are brilliant satires like “Fantastic Mr. Fox” and “”Moonrise Kingdom.” Others, like “The Life Aquatic with Steve Zissou,” miss the mark. “The Grand Budapest Hotel” falls somewhere in between. “TGBH” is a story within a story within a story and this fragmentation makes for a very busy, almost manic, bit of filmmaking. Anderson peoples the film with a plethora of characters played by many name actors who appear briefly in cameo, ranging from the helmer’s regulars Bill Murray, Adrien Brody, Edward Norton and Jason Schwartzman to newcomers to the fold - Fiennes, Tilda Swinton, Willem Dafoe, F. Murray Abraham, Mathieu Amalric and a slew of others. The problem I have is that the story, written by Anderson and Hugo Guinness, has too much going on. “TGBH” begins with the narrator, Tom Wilkinson, a writer waxing eloquent about the once grand hotel and how he came to be there during the height of Soviet rule. Switch to the now younger narrator (Jude Law) and his story involves meeting M. Mustafa (F. Murray Abraham), the owner of the Grand Budapest, who in turn, has his own story to tell.. This brings us to M. Gustave and Zero and their grand adventure, travelling near and far eluding the law for the theft of the painting, Boy with Apple, that Gustave’s deceased amour Madame D left him in her will. The Madame’s greedy family wants the painting for themselves, forcing Gustave to steal what is rightfully his and flee the scene of the crime. The abovementioned hijinks ensue with Gustave and Zero being hunted by policeman Henckels (Edward Norton) who pursues the duo after a prison break. Things get international when Gustave calls in The Society of Crossed Keys, a grand hotels old boy network of concierges who help Gustave and Zero in their plight. The montage of the many hoteliers calling one another in a long chain to help their colleague is underutilized but funny nonetheless. Anderson should mine the Society more fully as a future project. Wes Anderson and his team explore many different technical paths and give the look of “TGBH” a lot of variety. I am sure that the cast and crew had a great deal of fun but the finished product is too much of an indulgence to get a place as one of the writer-director’s best works.