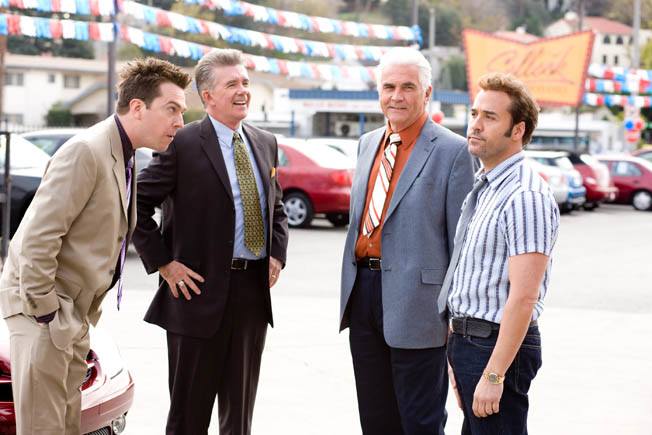 After turning around a failing Flagstaff car dealership, Don Ready (Jeremy Piven, HBO's "Entourage"), who's been partying with his exhausted crew of Jibby Newsome (Ving Rhames, "Pulp Fiction," "Day of the Dead"), Brent Gage (David Koechner, "Get Smart," "Sex Drive") and Babs Merrick (Kathryn Hahn, "Step Brothers," "Revolutionary Road") gets a call for help for an upcoming 4th of July weekend sale from Ben Selleck (James Brolin, "Last Chance Harvey") in Temecula, CA. Don drags his team aboard a Southwest flight determined to show Selleck that he's got "The Goods."

This low-rent, lowest common denominator comedy isn't quite as bad as one might expect due to a a breakout role in the Jennifer Coolidge vein from Kahn and a couple of laughs at the expense of rival car dealer and son-in-law-to-be Paxton Harding's (Ed Helms, TV's "The Office," "The Hangover") ridiculous 'man' band, but only by the smallest of margins. Despite a few chuckles, this loud, obvious and raunchy comedy suffers from a worse fate than its cheesiness - it's utterly forgettable. Piven's popularity has been in freefall ever since his silly sushi defense that was followed by press reports of his generally boorish behavior and he hasn't done himself any favors by starring in this amalgamation of a Will Ferrell comedy with "Kentucky Fried Movie" production values and supporting players from "The Hangover" who probably wish they'd known better. He struts through the film with a couple days' beard growth braying and spitting at everything in his path and is just plain generally obnoxious. What's surprising is why James Brolin took a pathetic role as an older gent with a literal hard on for David Koechner or why Gina Gershon appears in a non-speaking role as a back seat lay or why cult fave Kristen Schaal (HBO's "Flight of the Conchords") debases herself as a gullible airline attendant or why Ken Jeong, so outrageous in "The Hangover," allows himself to be so utterly wasted here. Wendie Malick (TV's "Just Shoot Me," "Confessions of a Shopaholic") is in one scene as Selleck's wife. Is this all because Will Ferrell, who appears in an extended cameo as Don's late best friend, is listed as producer? Talk about hitching yourself to a falling star. The film goes for laughs with racism, homophobia, perversion, mistaken identity, wild animals and swearing angels, but it is from a script from Andy Stock & Rick Stempson whose marginally better titled "Balls Out: Gary the Tennis Coach" went direct to DVD. There is little attempt to actually mine humor from the profession of car salesmanship. In addition to Kahn's lowbrow but lusty comic invention, Craig Robinson ("Pineapple Express") cracks a few smiles as DJ Request, who rebels whenever anyone asks him to play something. Jeremy Piven couldn't convincingly sell this film on "Live with Regis and Kelly," so it is no surprise that "The Goods: Live Hard, Sell Hard" is mostly a bust.