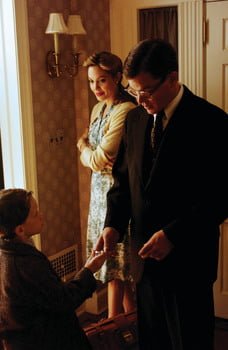 On the eve of WWII, Yale University's secret society, Skull and Bones, is watched by the FBI to cherry pick recruits for a new American intelligence agency, the OSS, the precursor to the CIA. Sam Murach (Alec Baldwin, "The Departed," "Running with Scissors") chooses Edward Wilson (Matt Damon, "The Departed") to spy on his own poetry professor, Dr. Fredericks (Michael Gambon, "Harry Potter and the Goblet of Fire," "The Omen"), suspected of running a Nazi Front organization. Wilson's success leads him into a post-WWII Cold War chess match with his KGB counterpart Ulysses and a life of paranoia that robs him of his soul while he plays at being "The Good Shepherd."

Robert DeNiro's second directorial job, like his first, "A Bronx Tale" is about fathers and sons, but whereas that was a small, personal story, "The Good Shepherd" is epic, spanning three decades of history and three generations. And DeNiro's direction is masterful here - he uses "The Godfather" as his structural and thematic template yet tonally his film is as cool as its predecessor is hot. The film jumps around in time, introducing Wilson's character at the end of the story, as he and his long time adjutant, Ray Brocco (John Turturro, "Secret Window"), watch their Bay of Pigs mission fail spectacularly. 'They knew where to find us. There is a stranger in our house.' Brocco observes. And so a pattern of tracing unknowable men, men who have given up family and friendship to disappear into the covert world of espionage where no one can be trusted and many are not who they seem, begins. Edward is a bookish youth at Yale, but one who is in love with a woman, the hearing-impaired Laura (Tammy Blanchard, "Stealing Harvard"), and one who enjoys life. It is after his stage performance of 'Poor Little Buttercup' - in drag - that he is invited to join the Skull and Bones society. As part of his induction, he must divulge his most trusted secret, and it is with the revelation of his father's (Timothy Hutton, "Kinsey," "Last Holiday") suicide that we learn what Edward is made of. He finds himself able to spy on his teacher after the man lies to him, but ironically, when he is invited into the OSS, he discovers he blew the man's undercover op. 'Get out while you can' Fredericks implores, but Wilson marches uneasily forward, just as he does when a pledge's sister, Clover (Angelina Jolie, "Mr. & Mrs. Smith"), becomes pregnant after her forceful seduction of him at a Skull and Bones retreat. The assassination of Fredericks and his love affair with Laura kill Edward's soul, but not his loyalty to country. He does not see his own son until the boy is five years old, returning from post WWII Berlin to a wife who admits to an affair and asks for separate bedrooms while they reacquaint themselves. This young boy, who is traumatized by his distant father, grows up trying to emulate him, but young Edward (Eddie Redmayne, HBO's "Elizabeth I") isn't made of the same stuff. The son's human weaknesses his father has disallowed himself expose the monster that the elder man has become. Screenwriter Eric Roth's ("Munich") brilliant, fictional history of the CIA charts the evolution of the Cold War like a global chess game while also showing the human toll on many, many characters. The film also works on a thriller level, as twists and double twists reveal hidden loyalties. The most obvious, Edward's German secretary (Martina Gedeck, the upcoming "The Lives of Others") who wears a large 'hearing aid' and seduces her boss, shows how deeply enemies will dig to exploit those sensitive spots. The final act, in which a tampered recording is reconstructed and reassembled like a jigsaw puzzle, is a dazzler. The huge case is ably led by Damon, a cipher behind thick glasses that make his eyes huge, all seeing but unknowable. It's a shifty performance and Damon lets just enough chinks shine through after the early years to let us see the man he might have been (teaching his son the art of building ships in bottles, his agitation upon sighting Laura years after their breakup). Billy Crudup ("Trust the Man," "Mission: Impossible III") is the affable Arch Cummings, Wilson's first British contact who gives voice to fearing what he's lost as the men grow older, while Lee Pace (SHOtime's "Soldier's Girl," "Infamous"), the American Arch introduces, presents the outward face of distrust. Turturro is terrific as a trusted aide whose tart line readings add some much needed humor and both Alec Baldwin and William Hurt show the weight of long held posts. DeNiro cast himself as Wilson's mentor, Bill Sullivan, and his chair-bound character proves a hearty adviser. Jolie exotic looks would seem a mismatch for a 50's housewife, but she's surprisingly good here. Only Redmayne disappoints (and distracts), too fey and rosy-cheeked for CIA consideration. Watch for rare sightings of 2001's Keir Dullea as Senator John Russell, Sr., Clover's father and Joe Pesci ("Lethal Weapon 4") as the Hyman Roth-like Joseph Palmi. Like "The Godfather" Deniro cross cuts his covert actions with social events and shows the hereditary nature of corruption. These spies, their shifting allegiances and political manipulations are not so unlike the mobsters who once ruled America. DeNiro even closes with a horrified wife realizing the nature and deeds of her husband. But where "The Godfather" roiled with passion and colorful period, "The Good Shepherd" sports a cool interior intelligence in a restrained monochrome world that may put off some audiences. It shouldn't. It's an accomplished piece of work that should reward repeated viewings.