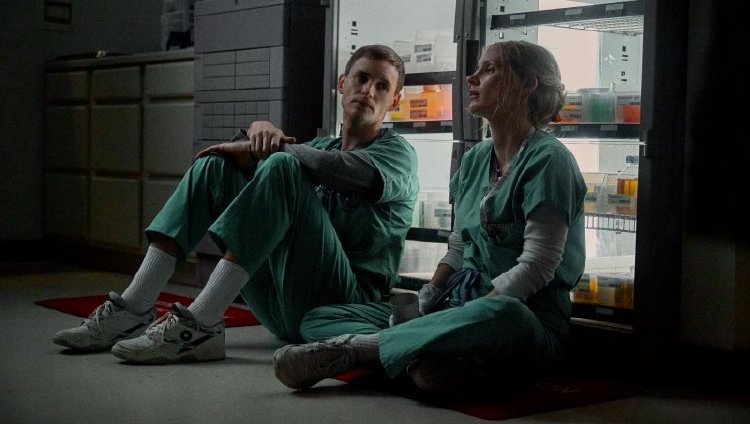 Hard working single mother of two Amy Loughren (Jessica Chastain) is a night nurse hiding her debilitating case of cardiomyopathy because she’s four months short of attaining health care and knows she would be fired were the condition known by her bosses at Parkfield Memorial.  A new hire, Charlie Cullen (Eddie Redmayne), appears to be a godsend, helping cover for Amy at work, helping with her kids at home, even stealing needed hospital meds.  But after being interviewed by Detectives Braun (Noah Emmerich, TV's 'The Americans') and Baldwin (Nnamdi Asomugha) about the suspicious death of one of her patients, Amy begins to note alarming patterns with “The Good Nurse.”

While Charlie Cullen was convicted for 29 murders at 9 different hospitals, it is believed he killed more, possibly as many as 400.  But director Tobias Lindstrom ("A Hijacking"), working with "Last Night in Soho's" Krysty Wilson-Cairns’ focused adaptation of Charles Graeber’s non-fiction novel,  chooses to highlight the horrific realities of the U.S. healthcare system which enabled Cullen’s crimes rather than the crimes themselves, resulting in a compelling, gut-wrenching narrative emphasized by his heroine’s unjust situation.

An opening scene shot through the door of a hospital room reveals Charlie responding to the shaking feet of a patient in distress, standing back dispassionately as a team arrives and tries, but fails, to save him.  Jumping forward six years later we witness Amy’s kindly bedside manner as she tends to Anna Martinez, suggesting to her patient’s exhausted senior husband Sam (Jesus-Papoleto Melendez) that he spend the night in a reclining chair in the corner of the room.  She’ll get called to the carpet for her flouting of the rules.

Amy’s own doctor advises that she quit work while awaiting a heart transplant, but she just cannot afford to.  Splitting his bill of almost $1,000 over two credit cards, she returns home to her two young daughters (Alix West Lefler and Devyn McDowell), handing over more cash to their caretaker Jackie (Marcia Jean Kurtz). At work, she sees new employee Charlie and shows him around.  He’s assigned to Anna, among others, but when he finds Amy struggling for breath after turning a patient, he tends to her with calm compassion.  The man separated from his ex-wife and kids finds a surrogate family in Amy’s.  Then Amy comes to work and finds out Anna has died with no warning.

Braun and Baldwin are called to Parkfield Memorial as the law requires, only to discover the suspicious death happened 7 weeks earlier, that the patient has been cremated and the hospital’s risk manager (Kim Dickens, TV's 'Fear the Walking Dead,' vacillating between steely and guilty) is stonewalling any attempt to get information, including making her presence a requirement during any interviews with hospital staff.  Luckily, she is called out of the room in the midst of Amy’s interview and, given Anna’s last chart, Amy notes that she should not have had insulin in her system, yet did.  But Amy cannot yet believe Charlie could be behind this, even after having witnessed him gaming the computerized drug-dispensing cabinets.  The next death, that of new mom Kelly Anderson (Anjelica Bosboom), and a catch-up visit with a past mutual colleague (Maria Dizzia), convinces her.

Lindstrom layers in details and builds suspense as slowly as the IV drips Charlie has contaminated, just like the lulling effect of Cullen’s outward calm.  This creeping anxiety underscores the haunting horror of lives being lost as the clock ticks, liability averse U.S. hospitals passing along a suspected serial killer just like the Catholic Church shuffling pedophile priests to new parishes.  Biosphere’s spare, chilly score and Jody Lee Lipes’ shadowy cinematography contribute to the mood (although Lipes’ lighting is often too murky, especially in hospital settings).  Redmayne does something different here, his red hair tamed into salt and pepper, his demeanor spookily distant yet oddly comforting.  It’s a captivating performance until he overdoes the histrionics in a third act interrogation scene.  Chastain, however, is just right, entirely convincing as a woman on the verge of a major health breakdown combined with exhaustion, yet extraordinarily patient with her children.  She’s “The Good Nurse” who sees the actual person behind every medical chart and her acting here feels more lived in than her Oscar winning Tammy Faye.

A hospital code blue is declared and, as the team works to save the patient, the on-duty nurse turns and walks away. Flash ahead eight years and Nurse Amy Loughren (Jessica Chastain) is overworked and thrilled to welcome on board a new nurse, Charlie Cullen (Eddie Redmayne). Then, patients start to die in “The Good Nurse.”

I remember, back in the 90s, hearing the reports of the killer nurse but, at a time when serial killers were more prevalent in the news, the story was just background noise. Now, decades later, the tale comes to light once again with director Tobias Lindholm and scripter Krysty Wilson-Cairns adapting Charles Graeber’s non-fiction book, The Good Nurse: A True Story of Medicine, Madness and Murder.

Rather than give us a procedural about Cullen and his crimes. The filmmakers shift attention to nurse Loughren, Charlie’s co-worker and, ultimately, accuser, and we see the world of “The Good Nurse” through her eyes. As said, she is happy to have Charlie’s help in the understaffed hospital wards and appreciates his kindness to her, a single mom, and her two young girls.

But, when patients start dying and she begins to notice Charlie’s questionable behavior, things turn into a crime procedural as Amy, working with detectives, helps end the horrific slaughter of hospital patients.

While the crime thriller is the real hook for “The Good Nurse,” including fine, no nonsense performances by Chastain and Redmayne, the scathing indictment of the hospital system is the meat of the story. How could one man, moving from hospital to hospital, get away with killing an alleged 400 people for years without being caught? That is the question that Graeber and his team ask and we all demand answers. One reason: fear of litigation, is not the answer, just an “administrative excuse.”