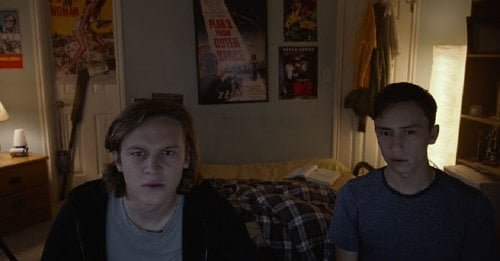 Tech savvy Ethan (Logan Miller) and Sean (Keir Gilchrist) have a prank project: rig the neighbor’s (James Caan) house to make him think it is haunted. On a day when they know Harold Grainey will be out for hours, they set up hidden cameras, mechanical devices to make things go bump in the night and control of all electronics. As the prank progresses, Sean begins to see that they picked the wrong guy in “The Good Neighbor.”

This teen prank gone wrong thriller is directed by Kasra Farahani and written by Mark Bianculli and Jeff Richard and it does a good job building up the tension as the innocent prank turns sinister. Things are not what they seem as Ethan chooses the neighborhood creepy guy to surveil and scare. Slowly, you learn his ulterior motive as Ethan breaks his own Terms and Conditions established in the beginning: no physical intervention after the bugs are planted and video recording everything for the experiment. I do have one problem with “The Good Neighbor.” The big reveal at the end took the wind from my sails when the filmmakers throw that switch. But, until that point, it is a decent tech thriller that benefits most from a tight, inner performance by James Caan as the put upon Grainey. There is anger and rage in the man but we really do not find out why until near the end. Logan Miller and Keir Gilchrist are okay as the pranksters but neither gives much depth to Ethan and Sean.