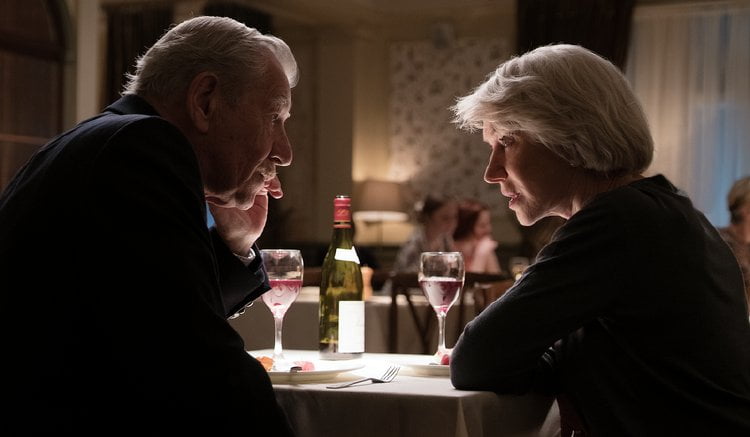 Aging con artist Roy Courtnay (Ian McKellan) thinks his ship has come in when he meets wealthy widow Betty McLeish (Helen Mirren). Betty is completely open with Roy but her grandson Steven (Russell Tovey, HBO’s ‘Years and Years’) is suspicious of his intentions, complicating plans for “The Good Liar.”

Director Bill Condon has made some marvelous movies from 1998’s “Gods and Monsters” through 2015’s “Mr. Holmes,” both, like this one, starring Ian McKellan. “The Good Liar” has also been adapted from the Nicholas Searle novel by “Mr. Holmes’” Jeffrey Hatcher. Not having read the book, it is difficult to tell just where everything went wrong. Most of us enjoy a good twist, but they only work when you don’t see them coming and this film goes to such extraordinary lengths to pull the plot out from beneath our feet it twists itself into a convoluted knot. There is still some pleasure to be had watching McKellan pull off dirty deeds and joust with Mirren, but once the film takes its first side step it quickly barrels downhill.

The film’s opening credits sequence is one of its most enjoyable as we watch Roy and Betty fudge the truth as they create dating site profiles. Agreeing to meet for dinner, ‘Brian’ tells ‘Estelle’ that the thing he hates most is a lie. Revealing his real name, Betty also admits hers. But Roy makes his living through lies. We witness he and his partner Vincent ("Downton Abbey's" Jim Carter) laying a financial trap for two marks, one of whom will pop up later at a most inconvenient time. A bad knee and a minor stroke add to the intrigue, as does a romantic trip Betty had once planned with her late husband.

The production cannot be faulted, Roy’s beloved London established with his classic Belsize Park apartment, London’s hustle and bustle contrasted with Betty’s tasteful suburban home where Roy feels like he’s ‘drowning in beige.’ It is a joy to watch Mirren and McKellan shop in the old world establishments of Fortnum & Mason’s and Locke & Co. Hatters and a kick to watch the eighty year-old McKellan take out an inconvenient obstacle on a London subway platform. Carter Burwell’s score encompasses both the romanticism and suspense of the story.

But suspense flags too early when one of the characters acts too inexplicably and past events grow so outrageous their connection to the present proves too convenient. “The Good Liar” is a beautiful looking production (cinematography by Tobias A. Schliessler) featuring two beloved stars which just makes it all the more disappointing.