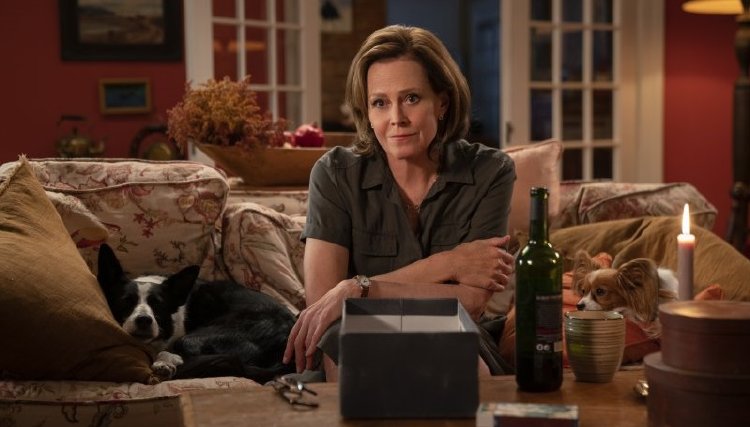 Hildy Good (Sigourney Weaver) has long been the premier realtor in the prestigious coastal town of Wendover north of Boston.  But eighteen months ago, her two daughters (Rebecca Henderson and Molly Brown) who depend on her financially, the ex-husband (David Rasche) who left her for a man and the employee who raided her rolodex and stole her clients staged an intervention for a drinking problem which had been escalating out of control.   Now Hildy hides the drinking she’s curbed to merlot in the evenings while her childhood crush, townie garbage and handyman contractor Frank Getchell (Kevin Kline), refuses to sell the waterfront land parcel next to her home as a way of protecting her in “The Good House.”

Cowriter (with Thomas Bezucha)/directors Maya Forbes and Wallace Wolodarsky ("Infinitely Polar Bear," "A Dog's Purpose") have gifted star Sigourney Weaver with a complex character study of a flawed woman with an unusual gift at a crucial crossroads and the actress embraces it with gusto.  Using direct camera addresses, Hildy takes us into her confidence, sometimes rationalizing her own behavior but never outright lying as she does to her family.  It’s a tricky device to pull off, but Weaver and the filmmakers nail it.  Forbes and Wolodarsky employ a large ensemble as Hildy’s family and the denizens, many past and future clients, of fictional Wendover (a stand-in for novelist Ann Leary’s home town of Marblehead), but many of them are less character portraits than fuel for the plot’s fire.

There are three drinking episodes, something which Hildy describes as ‘jackpots,’ which push Hildy’s narrative to its climax.  After attending a dinner party at the home of her arch rival, Wendy Heatherton (Kathryn Erbe), Hildy abstains but is convinced to illustrate her talent for mind reading, something she does so precisely with new resident Brian McAllister (Kelly AuCoin), he is floored.  Wendover’s psychiatrist Peter Newbold (Rob Delaney) challenges, pointing out how Hildy led him to his memory, but her former lush bestie Mamie Lang (Beverly D'Angelo) counters that there’s more here than meets the eye.  Hildy returns home to the two dogs she refers to as ‘her girls’ and cracks open a bottle of merlot from a stash hidden in a garden shed, explaining that she’s never really thought of wine as alcohol.  We’ll learn later just what transpires this evening.

Brian is the husband of Rebecca (Morena Baccarin), a woman whose fragile mental state may explain their recent move to one of the town’s priciest residences.  Rebecca is forgiving of Hildy’s stint in rehab stating that many of her friends have gone, still drink and ‘are fine.’  In turn Hildy tries to introduce Rebecca into Wendover society, but an incident on the beach with the autistic son of Cassie Dwight (Georgia Lyman) causes Rebecca to withdraw.  Hildy’s been working hard to sell the Dwights’ home so they can be closer to a special school for Jake (Silas Pereira-Olson) and it is the need for renovations and lack of budget that finds her appealing to Frank for help, leading to an invitation for dinner where we learn that the townie has more insight into the realtor he’s loved for a long time than she does herself.  Thanksgiving is an escalation Hildy gets away with (somewhat unbelievably) but when she bags the town’s hugest deal, Clementine’s Cove, the developers insistence on celebrating with a bottle of Scotch leads to a crisis enveloping the entire town.

Nova Scotia locations are a fine stand-in for the upscale northern coast of Massachusetts with several luxury homes, including Hildy’s, East coast versions of the Nancy Myers aesthetic, while the town center’s more cramped clapboard structures reflect its sea faring history.  Change is reflected in the upscale coffee shop which Hildy reacts to with thrifty Yankee resistance, but which feeds her gossip in the form of Henry Barlow (Paul Guilfoyle).

Forbes and Wolodarsky have set up an elaborate, interconnected bunch of town secrets to nurture their climax, but one character’s tragedy is swept aside when the red herring they’ve set up is averted.  It is this character who is the recipient of that mind reading trick introduced as a connection to Hildy’s forebear Sarah Good, the first witch accused at Salem, when he ‘visits’ the inebriated Hildy.  But they’ve done a better job eking out Frank’s role as a Guardian Angel, his quiet acts of compassion the final bow wrapping up plot threads for a happy ending.  The role is unlike anything Kline has played before, his Massachusetts townie accent and blue collar trade at odds with his financial clout, something which Kline portrays with Down East simplicity.  But this is Weaver’s film through and through and the actress is “The Good House’s” solid foundation.

Hildy Good (Sigourney Weaver) was once the top realtor on the North Shore of Boston but life got the better of her and she landed in rehab. She tells everyone she is back on top once again but, despite her fervent denials, is still struggling with the bottle in “The Good House.”

It has been a long while since I have seen anything of note from Sigourney Weaver so it a pleasure to see her take on a serious role and character in Hildy. At first, we only catch glimpses of her problem as she stoically hides the fact that she is a secret tippler. But, as her story progresses, the chinks in the armor of her denials begin to show. She still hustles at her job, though, trying to get back her rep as the best, Except, her former employee, Wendy (Kathryn Erbe), has been horning in on her territory and is poaching Hildy’s clients.

Enter Frank (Kevin Kline), a local businessman who, we find out, has a past with Hildy. The two begin to see each other and sparks fly between them. Then, Hildy and demon rum intrude and she pulls a “jackpot” - get so drunk you embarrass yourself and do not remember. Frank, the victim of the jackpot, is not pleased with her.

There are other players in the small, close-knit community that know, or do not know, of Hildy’s secret. Newcomer Rebecca (Morena Baccarin) is an outsider who Hildy befriends – and pulls yet another jackpot – and tries to bring her into the town’s fold. Most of the other players are background.

The story, as I said, is set in north coastal MA and the filmmakers use Nova Scotia in Canada as a stand-in locale and it works quite well, making me feel I was in the north shore community.
But, this I Sigourney’s film (with a little help from her good buddy, Kevin, in their third collaboration) and it is a good showcase for the actor as she embodies Hildy Good.

Lionsgate and Roadside open “The Good House” in theaters nationwide on 9/30/22.