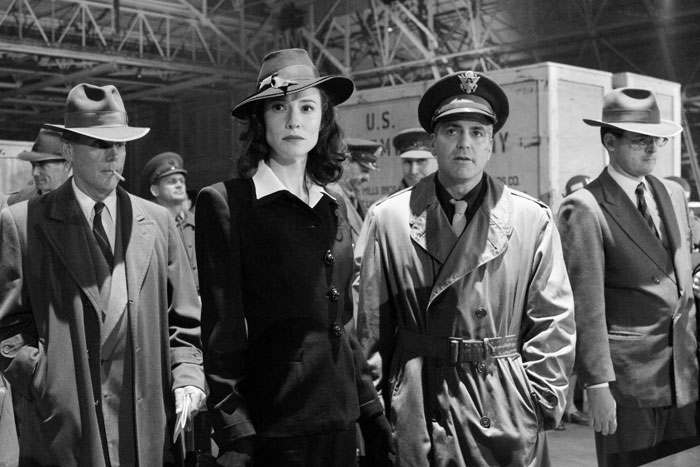 If war is hell, then what happens after?” Filmmaker Steven Soderbergh asks the question in this tale (by scripter Paul Attanasio) of the lives of the occupiers and survivors in post-World War II Berlin. War Correspondent Jake Geismer returns to the now bombed out city to cover the upcoming Potsdam Conference. He is picked up by his driver, Corporal Tully (Tobey McGuire), a fresh-faced soldier with exuding aw-shucks, hometown charm. But, Jake soon finds out that neither Tully nor Berlin is what they seem in The Good German.”

The eclectic Mr. Soderbergh is always willing to push the filmmaking envelop beginning with his debut oeuvre, “sex, lies and videotape.” Since then he has done it all, from his big budget, megastar Hollywood blockbusters, like “Ocean’s Eleven” to independent-style films, like “Traffic”, and his mini-budget, non-actor gem, “Bubble.” He continues his examination of genre with “The Good German” but with mixed success. Shot in the filmmaking style and technology of the 1940’s – antique lenses used in the day; noir style backdrops and back projection of the era; black and white photography; and, attention to the precise detail of period props – Soderbergh and company succeed in (almost) perfectly capturing the look and feel of film of that time. While technically well crafted (though I found the color stock used, when changed to black and white, doesn’t have that wonderful graininess that the great noir films of Billy Wilder or William Wyler) “The Good German” rings forced. Despite the use of period-style set design – like moving the rubble of bombed out Berlin from one set to another (as done in the old days) and using footage from such 40’s flicks as “A Foreign Affair” and newsreels of the time – something didn’t feel quite right with the film. The problem, I think, is Attanasio’s screenplay and its fervor to try to cover too much ground. The script tries to be quite a number of things: human drama about the harshness of post-war Berlin and its impact on the survivors; mystery over the death of Corporal Tully, who is not the apple pie, motherhood loving GI he seems; rekindled romance between Jake and Lena Brendt (Cate Blanchett), a woman who has lived a secret, horrific past since they last saw each other before the war; thriller that centers on the political turbulence as the occupying victors decide the spoils of war – the people of Berlin. This is a great deal of stuff to pack into 105 minutes and the overall package falls short of its potential. With so much going on, the dialog tends toward speechifying as such things as war, the Holocaust, the immoral use of slave labor to build weapons of mass destruction, political corruption on both the Russian and American fronts are delved into to make statements about our current world situation. This results in wooden characters left to recite their lines, with feeling but without dimension. Clooney, Banchett, McGuire and their supporting cast – Beau Bridges, Jack Thompson, Leland Orser, Robin Weigert, Ravil Isyanov and the rest – do their best, particularly Blanchett, but are hamstrung by the politically ambitious screenplay. You have to hand it to Soderbergh and his collaborators, both in front and behind the camera (only one camera is used as was the style in the 40’s), for the precise attention to detail - the draw for film buffs to “The Good German.” They should have tried a less ambitious script or made it a heck of a lot longer to let the characters develop. What we have here is a mixed bag.