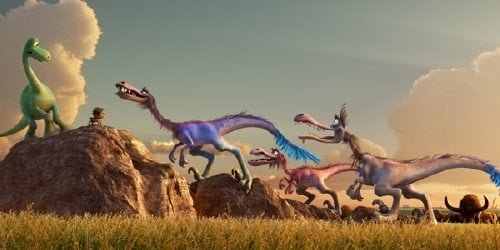 When a pair of corn farming Apatosauruses hatch their first eggs, Arlo is the third and smallest. Poppa (voice of Jeffrey Wright) teaches his kids to overcome their fears and make their marks, but although older brother Buck and sister Libby grow into adult roles, Arlo's timidity holds him back. When he fails to kill the critter that's been stealing corn from their silo, Poppa takes him to hunt it down, but tragedy strikes, leaving Arlo lost and afraid. But he will learn to conquer his fears through a friendship with the very creature he'd been tasked with killing in "The Good Dinosaur."

In these times of helicoptering parenting and trigger warnings, a film whose theme is overcoming your fears is a refreshing message. Yet Pixar's latest, although charming, is slight in the story department, leaning on the classic "Bambi" for a new crop of little ones. Screenwriter Meg LeFauve ("Inside Out"), who has one of *five* story by credits, has fashioned a reverse boy-and-his-dog story, one in which the young human named Spot (voice of Jack Bright) is the brave, animalistic aggressor. Director Peter Sohn, a Pixar veteran making his feature debut, has orchestrated an American Northwest still being formed, one of vast canyons and mountains which dwarves the creatures who live there. There is great beauty, but also great danger. Those who've objected to the film's pairing of a boy and a dinosaur should note that the film begins with an amusing prologue which threatens Earth with a great meteor...and then has it miss. A few million years later and we're set down in the rather weird setting of of domestic dinosaurs, tilling and planting seeds. As Poppa and Momma (voice of Frances McDormand) watch their eggs hatch, they're greeted by a typically rambunctious boy and playful girl. Arlo (who it should be noted resembles his Momma) is clearly a scaredy cat, clinging to the inside of his shell. Arlo (voice of Raymond Ochoa) is terrified to find himself alone and far from home, but remembers Poppa's words that the river will guide him home. But he's also starving, and his attempt to eat berries out of his reach finds him toppling off and becoming trapped by the boulder he was standing on. The next day, he finds himself mysteriously freed, tiny scrapings and prints in the ground. Rains come and he builds himself a shelter, only to panic when the growling critter arrives, scrambling on all fours with a lizard in his mouth. Spot's second attempt to feed Arlo is no more successful, the young dino horrified as the human snaps off the head of a huge, prehistoric insect. The third time's the charm, berries being delivered, but Arlo's want of more leads him to confront a big fear in Spot's fearless wake. The odd couple will meet up with a trio of vicious pterodactyls led by the duplicitous Thunderclap (voice of Steve Zahn) and find unlikely friends with paternal T-Rex Butch (voice of Sam Elliott) and his young 'uns Nash (voice of A.J. Buckley) and Ramsey (voice of Anna Paquin). A pet collecting Styracosaurus (voice of the director) met early on is the film's funniest character who also first gives Arlo the idea that the little human could be useful in finding his way home. Love and the importance of family are the driving characteristics through which Arlo makes his mark, a good dinosaur indeed. The 3D animation features cartoonish renditions of its beasts set amidst stunningly naturalistic environs, from realistic rushing water to swarms of fireflies against the night sky. Grade: B- The movie is preceded by a short, "Sanjay's Super Team," in which a young Indian boy's preoccupation with his 'Super Team' cartoons and action figures annoys his father, who wishes the lad to join him for Hindu prayer. Director Sanjay Patel has based his film on his own experience, but it's readily apparent where the film is heading the moment we see the three Hindu deities represented in Sanjay's father's cabinet. It's like an uninspired riff on the "Powerpuff Girls," however heartfelt. Grade: