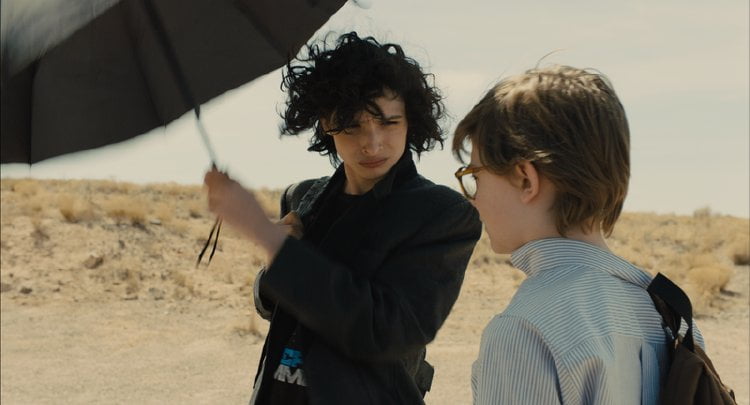 Already abandoned by his alcoholic actor father, Theodore Decker (Oakes Fegley of "Pete's Dragon") is made an orphan when his beloved mother perishes in a terrorist bombing at the Metropolitan Museum of Art. With the world having stolen what was most precious to him, Theo steals something from the world, something which saving keeps his mother close, Carel Fabritius's 17th century painting of "The Goldfinch."

Screenwriter Peter Straughan ("Tinker Tailor Soldier Spy") shuffles time with his adaptation of Donna Tartt's massive novel, slowly teasing out the traumatic event which opens the book, the bombing not fully visualized until the film's final moments. He's done a fair job of cramming an awful lot of story into movie length, although some characters, like Tom Cable and Mr. Silver, are mere passing references, and the going gets choppier the more Theo's adult criminality catches up to him. Still, there is much to admire about director John Crowley's ("Brooklyn") movie, which despite its stripped down adaptation still projects the book's themes largely due to many affecting performances in his sprawling ensemble and his beautifully appointed production shot by master cinematographer Roger Deakins.

The film opens in a hotel room in Amsterdam overlooking a canal where the adult Theo (Ansel Elgort) frets over a lost painting whose significance will be known only to readers of the book. Flashing back, we see the coolly patrician Mrs. Barbour (Nicole Kidman) express confusion when authorities knock on the door of her family's sprawling Manhattan apartment seeking shelter for the little boy who named her as someone who could take him in. Her youngest son, Andy (Ryan Foust), is a sometime playmate of Theo's, although the two haven't been in recent contact. Throughout the 'Barbour' segment, we witness the dysfunction of a large, moneyed family whose patriarch (Boyd Gaines) is losing touch with everything but his love of sailing on the sea. Kidman is perfection as the woman whose reserved, elegant exterior is wrapped around a heart big enough to let the motherless child in, and it is just when her acceptance of Theo is about to erase his 'temporary' status that Theo will face a major life change with the words 'you have a visitor.'

The Barbour segment of the film also introduces the persons who will become the touchstones of Theo's life. The young boy makes his way to Hobart & Blackwell antique and restoration shop, ringing the delivery bell. Hobie (Jeffrey Wright) answers, looking as perplexed as Mrs. Barbour until Theo holds out the gold and carnelian signet ring he acknowledged as the family heirloom she assumed it to be. But it belonged to Welty Blackwell (Robert Joy), the uncle of the young girl, Pippa (Aimee Laurence), who so captivated Theo he didn't follow his mother that fateful day. As it turns out, Pippa is recovering there, her memory and musical ambitions shattered, and Hobie allows Theo to visit, eventually mentoring the boy in his trade (Blackwell was the front of the house sales and business partner, Hobie the restoration expert).

But that visitor at the Barbours turns out to be Theo's father Larry Decker (Luke Wilson) and his gum-smacking girlfriend Xandra (Sarah Paulson, as mesmerizing as a cobra) wishing to collect him and return to Las Vegas. And so Theo leaves the cool refinement of his Manhattan environs for a sun-blasted housing development full of empty foreclosures and the poor dog Xandra saw fit to leave alone for days. While Xandra clearly resents his presence, at first Larry appears to be the 'not always bad' guy Theo had remembered, even if Xandra dismisses Theo's concerns about his now 'sober' dad's drink with 'it's only a beer.' We see what Theo doesn't, at least until Larry's desperation reveals it all, but in the interim he forms another friendship that will reverberate throughout his life when Ukrainian wild child Boris ("It's" Finn Wolfhard) calls him 'Potter' on the school bus. Boris is one of the book's standout characters, a neglected squatter, abused by his father, who introduces 'Potter' to booze, cigarettes and drugs while also being the most loving and loyal of friends. Wolfhard is Kidman's equal here, his interpretation of the character perfection. When another major life event shatters Theo's existence and he flees back to New York City, we're awfully sorry to see Boris go, but the adult Theo, having taken Welty's place in Hobie's business, reconnects with those who got him through his childhood in surprising ways.

Of those characters blessed with significant screen time in the adaptation, Wright's Hobie suffers the most, his relationship with Welty and the business issues they were beginning to face sketchily defined, leading to some of the many bumps in the latter piece of the cinematic story's road. When customer Lucius Reeve (Denis O'Hare) meets Theo with accusations of fraud and potential cause for blackmail, some may experience whiplash. Overall, the filmmakers have favored the earlier half of the story to the latter, yet adult actors have been well matched with their younger counterparts, 'NOS4A2's' Ashleigh Cummings heartbreaking as Pippa, suggesting with scant screen time her and Theo's cerebral soul mating. Also abbreviated here is Theo's reentry into the Barbour family upon learning of a tragedy of their own, but these broad brush strokes prove sufficient. "Dunkirk's" Aneurin Barnard picks up from Wolfhard, his early influence on Theo far more dangerous as it affects his present even as his love and loyalty remain unquestioned. Elgort may not elicit the same sympathy his younger counterpart does, but he conveys Theo's broken spirit and the second hand happiness afforded him by those who chose to love him.

"The Goldfinch" may not be everything lovers of the book would hope for, the film perhaps better suited to a limited mini series or at least another half hour running time. That little bird who represents so much is still capable of moving us though.