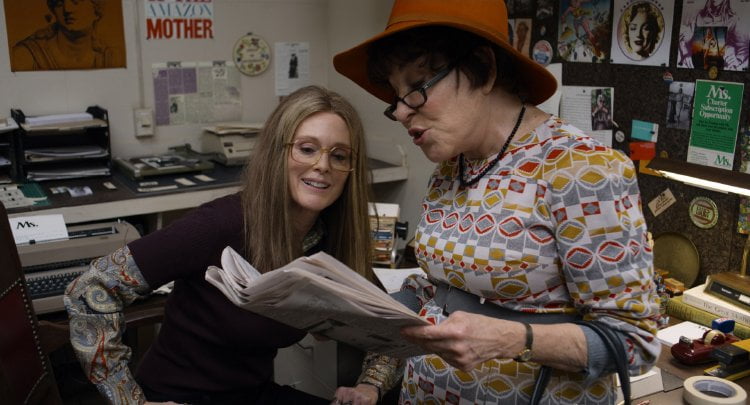 Now she is a feminist icon, but she took a circuitous route getting there, one that included a seminal trip to India and a stint as a Playboy bunny.  Adapting her book ‘My Life on the Road’ with Sarah Ruhl, director Julie Taymor ("Titus," "Across the Universe") casts four different actresses to portray “The Glorias.”

Arriving on the heels of Hulu’s ‘Mrs. America’ mini-series, which featured Steinem portrayed by Rose Byrne as well as several other figures present here, is sure to be a negative for Taymor’s project which can be, at times, downright awful.  What can one say about a Gloria Steinem biopic in which she tap dances in a Black barbershop as a child or meets a cutesy couple of Harley enthusiasts in a diner who gush in admiration of her feminism?  Corny, say I.  “The Glorias” provides formative background about how Steinem’s charming failure of a father Leo (Timothy Hutton), aka ‘Steinomite,’ utterly destroyed her journalist mother Ruth (Enid Graham, “Margaret”), yet Gloria’s adoration of her dad negates our own conclusions.  Better are some of her alliances with feminists like Dorothy Pitman Hughes (Janelle Monáe), who helps her conquer her terror of public speaking.

The film begins with a too-young-to-be-traveling-alone Gloria ("The Art of Racing in the Rain's" Ryan Kiera Armstrong) aboard a Greyhound bus, allowing for an editing segue to an older version (Alicia Vikander) on a train in India.  Taymor will use this device throughout the film and we will later learn the younger Gloria was fleeing the responsibility of caring for her mother after they are abandoned by her father (she returns).  Arriving at her destination in India, Gloria’s friend (Madhur Jaffrey, "A Late Quartet") doesn’t even let her put down her suitcase before announcing she has to leave immediately to document the impact of riots on village women.  Gloria is profoundly moved by their stories and picks up the organizing principles of Mahatma Gandhi.

It is Vikander, employing a flat Midwestern accent, who carries the bulk of the film, including Gloria’s early experiences with sexism as both an undercover bunny and the resulting magazine article’s author. She is also at the 1963 March on Washington where it is pointed out in some obvious exposition that none of the female activists on the stage have been allowed to speak (much of the dialogue is numbingly obvious, famous catch phrases pointed to with virtual neon arrows).  She gets her own fantastical moment, shared with Julianne Moore, when her inability to come up with a comeback to a sexist TV interviewer inspires visions of “The Wizard of Oz’s” tornado scene.  Vikander, too, is the one to choose Steinem’s iconic aviator glasses against the advice of a saleswoman that they would hide too much of her face.  The scene feels shoehorned in.

Hopscotching back and forth in time, we meet Flo Kennedy (Lorraine Toussaint, "Selma"), Dolores Huerta (Monica Sanchez) and Wilma Mankiller (Kimberly Guerrero, "Hidalgo") (the less said about this film’s Bella Abzug, played by Bette Midler with the subtlety of Mickey Rooney in “Breakfast in Tiffany’s,” the better).  Ms. Magazine is founded, Steinem the one to nail its name.

There is a cross country trip with dear old dad, hoping to profit off the star sapphire he’s insisted his daughter bring back from India.  Taymor also throws animation into her bag of tricks with a modernized version of the six armed god Kâli keeping that Indian influence front and center.

While we do come away from “The Glorias” with an understanding of the broad scope of Steinem’s life, we don’t really get a deep sense of Steinem the person, despite a fairly convincing Vikander and remarkably lookalike Moore ("Annabelle: Creation's" Lulu Wilson is the fourth iteration).  Graham offers strong support and while Hutton’s Leo sometimes verges on caricature, he’s also very effective in certain scenes (just watch a look of ‘my daughter’s outgrown my shtick’ flash over his face).  Many of Taymor’s signature flights of fancy fail her here.  In the end, “The Glorias” is “Steinem for Dummies,” or, taking a page from Mary Trump’s book, ‘too much and never enough.’

Gloria Steinman has been an icon of the women’s rights movement since she came to the femme population’s attention in the 1960s – it took men a lot longer to get the point. Director Julie Taymor brings that long and colorful story to the screen showing the stages and development of the activist’s life in “The Glorias.”

At two and a half hours. “The Glorias” could have been an in-depth look into the uber-feminist’s life, the trials she faced and the successes and failures that Steinman experienced in her fight for women’s equality. And, we get that in Taymor’s interpretation of the activist’s long history. But, the result, to me, is a Steinman-lite treatment that hits all the points of her experience, but never really gets into the heart and soul of the woman.

While Julianne More personifies the look of Steinman with which we are all familiar - long, straight hair parted in the middle, athletic body and signature aviator glasses - Alicia Vikander, as the younger older Gloria, gets the lion’s share of screen time. That version of Steinman represents the foundations and cultural development of the young activist who would later be the voice of all women. Well, not all. There were Phyllis Schlafly and Anita Bryant back then, too.

As said, “The Glorias” touches upon all the accomplishments and failures of her activist career. But, for the most part it only touches upon these points and never gives any depth or edge. So, we have a nicely done film, with solid production, costume and settings, but one that just goes through the motions without investing me in the story.

The Glorias are well played, particularly by Alicia Vikander during Steinman’s middle years, but the supporting cast is sketchy. In particular, Bette Midler, as firebrand Bella Abzug, comes across as a kindly Jewish mother who wants to make sure you eat enough and channels Abzug not at all.

Gloria Steinman’s long life as a feminine activist deserves to be told. When I saw that Julie Taymor was directing the biography, I expected, maybe not a “Gandhi,” but something with more teeth than the homogenized, femme-feel good version we get with “The Glorias.”

Available September 30, 2020, on digital and dtreaming exclusively on Prime Video.