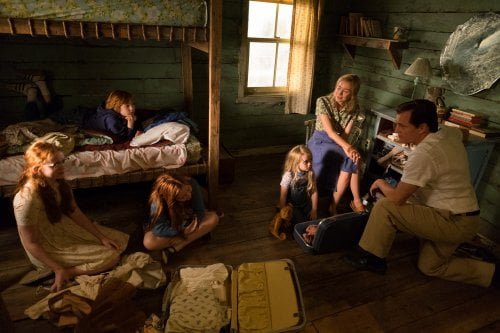 When celebrity gossip columnist Jeannette Walls (Brie Larson, "Room") decides to marry David (Max Greenfield, "Hello My Name Is Doris," TV's 'New Girl'), it is time to for her to face her unconventional, at times traumatic parents, Rose Mary (Naomi Watts) and Rex (Woody Harrelson), currently squatting in an abandoned building on the Lower East Side in "The Glass Castle."

Cowriter (with "The Shack's" Andrew Lanham)/director Destin Daniel Cretton reteams with his "Short Term 12" star for his adaptation of Jeannette Walls’s best-selling memoir, but it is young Ella Anderson ("The Boss") who shines the brightest as Larson's earlier incarnation, the one whose idolization of her brilliant, alcoholic father curdles with repeated disappointment. This real life parallel to last year's "Captain Fantastic" illustrates how it is possible to both love and hate the same person and how trauma can both scar and strengthen. The film's main drawback is that it skips over how Jeannette matured from college student to careerist, leaving a disconnect between the aspiring writer of Welch, Virginia and the sleek gossip columnist of New York City. The film opens in 1989. Jeannette leaves a business dinner with her financial analyst fiance, when she spies a homeless woman going through a dumpster and recognizes her mother. A homeless man threatens her cab and she slinks in the back seat, refusing to recognize her dad. As she lies in bed that night, her mind wanders back to a typical childhood occurrence, her dad waking the family in the middle of the night to run from bill collectors. When Jeannette asks why she and her siblings don't attend a 'real' school, Rex drives off their dilapidated station wagon off the road into the desert, declaring that reality is all the school they need. Eccentric painter Rose immediately sets to painting a Joshua tree, drawn to its battered survival. The family camps and dad points to the stars. Things like food take a back seat to adventurous freedom. Cretton keeps the focus of his 1989 present to Jeannette's eroding resolve to deny her heritage while David spins lies about her background to his wealthy clients. Her past is packed with enough damage for a dozen childhoods, constant poverty and hunger weighed down with terrifying incidents. Rex's idea of teaching Jeannette how to swim (at a public pool they visit to use its facilities) is to throw her into the deep end - not once or twice, but three times. As an even younger child, her request for lunch is batted away by a mother who asks what is more important - food that will be gone in minutes or her painting that will last forever? The child attempts to cook for them both, her clothing catching fire, scarring her for life. With the family finances at their lowest, Rex reluctantly takes the family to his parents, revealing his own deep-seated issues at the hands of his abusive mother Erma (Robin Bartlett, "Inside Llewyn Davis"). They will stay in Welch, renting a shack high upon a mountain, the foundation for Rex's castle mutating into garbage dump as the years pass, Rex raging as his children break free, one by one, despite the many obstacles he erects in their paths. Harrelson is more than up to the tasks of the complex character that is Rex, crafting immense charm tainted by his own demons. An almost unrecognizable Watts is emerging as a gifted character actress, her Rose Mary's unbreakable attachment to Rex blinding her to the needs of her children. Larson builds on Anderson's disillusionment, outwardly standing up to Rex while plotting her escape, but the more elegant creature who emerges is severe and Larson and Greenfield never convince as a couple. The actress plays more notes as her character finds forgiveness. Anderson, though, does the heavy lifting along with Harrelson, the twelve year-old's grasp of human nature and ability to convey it well beyond her years. As Jeannette's older sister Lori, "Predestination's" Sarah Snook provides realistic acceptance countering her sister's emotional confusion. Josh Caras and Brigette Lundy-Paine play the roles of younger siblings Brian and Maureen. The production covers an immense landscape and does it well, from remote rural areas to small town Welch to 80's New York City. Costume, hair and makeup add authentic character notes. The film ends with fascinating home movies of the Walls family. "The Glass Castle" suffers from too much story, Cretton's emphasis on flashback detracting from Jeannette's subsequent choices. We, along with Rex, wonder just how this gifted and intelligent young woman embraces superficiality. But as a portrait of a family seesawing from gratification to siege it is recognizably human and often moving. Grade: