The Girl with the Dragon Tattoo 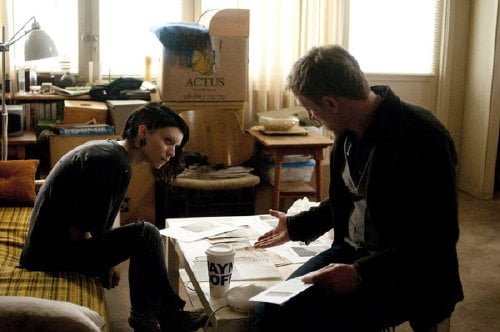 Financial investigative reporter Mikael Blomkvist (Daniel Craig, "Cowboys & Aliens") has just lost a libel case against industrialist Wennerström when he gets an unusual offer to do some sleuthing for Henrik Vanger (Christopher Plummer, "Beginners"), the head of Sweden's largest family owned company, in the remote northern part of the country. Vanger believes his niece, Harriet, was murdered by a family member back in 1966, and he's hoping Blomkvist may be able to shed new light. When Blomkvist expresses the need for an assistant, he supplied with the unusual woman who vetted him for Vanger, Lisbeth Salander (Rooney Mara, "The Social Network"), "The Girl with the Dragon Tattoo."

Last year when the Swedish version of this film was released, I predicted that an American remake would possibly be better, something which is not usually the case. When director David Fincher ("Fight Club," "The Social Network") took on the project I would have bet big money on it. But after producing two masterpieces in the past four years ("Zodiac" and "The Social Network"), Fincher has failed to kick my ass in the ways I expected. Certainly, in this director's hands, the movie is far more cinematic than the original (the Swedish trilogy has just been released in its full nine hour television cut), and screenwriter Steven Zaillian's ("Schindler's List," "Moneyball") adaptation is preferable, especially as regards the Salander/Blomkvist relationship, but until Fincher dives into the serial killer aspects of the story, he almost seems to soft pedal this one, as if he's cast a protective cloak over his young star. Even the film's open title credit sequence, a fetishized liquid black male and female figure with a motorcycle set to Karen O's cover of Led Zepplin's "Immigrant Song," seems lacking. The American movie begins exactly in the same way as its Swedish counterpart, with Lisbeth being introduced to Vanger's attorney to report on Blomkvist, and immediately we see a different Salander, one, perhaps, a little bit more like the book's description of her. If Noomi Rapace had a fierce, tough exterior, Rooney Mara (hmm, both actress's names have a double o in the first and two a's in the last...) is much quieter, a bit feral, but drawn more within herself as if despite her piercings, bleached eyebrows and tattoos, she didn't want to be seen. When she moves, she's hunched over, usually with her hoodie pulled far over her head. We don't see any evidence of Lisbeth the warrior until a punk tries to steal her backpack on the subway, and even then, she's more about outrage and dexterity than whoop ass. The film's first 75 minutes or so are spent building Blomkvist and Salander's story lines until they intersect, and it is only then that the film kicks into gear. Salander goes to celebrate the holidays with her guardian and discovers him in serious medical shape. This, of course, puts her into the hands of Bjurman (Yorick van Wageningen, "The Way") who reins Lisbeth in on a choke-chain which includes sexual abuse. And yet for all his ability to disturb with the darker sides of human nature, Fincher's staging of Lisbeth's rape does not, nor does her subsequent turning of the tables. As cast, Bjurman is also rather bland. Meanwhile Blomkvist is getting the lay of the land on Vanger's island, in Fincher's hands mostly through Vanger's verbal history. For all the intricacies of the family, including Nazism, only two others on the island come into any kind of prominence - Martin Vanger (Stellan Skarsgård, "Melancholia"), Henrik's nephew who now runs the company and Cecilia (Geraldine James, "Made in Dagenham," "Sherlock Holmes: Game of Shadows"), his sister. Oddly, but somewhat effectively, whenever we see the young Harriet in flashback she almost looks like she's also played by Mara (she's not). Until Lizbeth comes in, Blomkvist mostly meets with the local Vangers and the case's original detective, Morell (Donald Sumpter), goes to London to question Anita Vanger (Joely Richardson, "Anonymous," exceptional casting with James for familial resemblance) and figures out that Harriet saw her killer in town on that fateful day in 1966 by carefully assembling photographs from disparate sources. There are a number of problems with Fincher's version, although not as many as Swedish TV's. One notes immediately that accents are inconsistent. Wright starts off with a Swedish inflected one which wavers in and out while Craig doesn't even bother. Their characters's affair is given more weight here, but it's oddness and long standing history are missing. The film's pacing is uneven, a slow build to an exciting mid section followed by a too long coda to a very well done ending, sold by Mara's expression of her perceived relationship with Blomkvist. Maybe this unwieldy and ofttimes rather trashy book just cannot be turned into something better, but if the original version's theatrical cut emphasized the exploitative, Zaillian gets more of the characterization right, if at the expense of Millenium and Sweden's business world itself. Zaillian has also changed the solution to the Vanger family mystery in a way that shaves off another of the book's trailing tendrils to the tale's benefit. Casting is fine for the most part, although Mara may divide audiences. She's compelling in an entirely different way than Rapace, more of an alien creature operating under the radar than a severely damaged young woman. Mara is quiet, focused, entirely out there when seducing Blomkvist (Craig's reaction is more perplexed than aroused), and yet the performance often seems muted. The film has beautiful production design, from Lisbeth's messy yet impersonal apartment and Plague's den (the NIN tee shirt is an amusing touch) to the Vanger family compound, anchored by Henrik's chilly estate looking like the Overlook Hotel in miniature, Martin's ultra-modern cliffhanger and Blomkvist's borrowed rustic cottage. The Vanger offices have the feel of a large, old-school business now smaller and somewhat musty. Jeff Cronenweth's ("Fight Club," "The Social Network") cinematography accentuates the blue light of a cold environment, his compositions elegant. Photographs and flashbacks to the many killings linked to Harriet carry the imprint of Fincher's "Seven," but this critic, at least, wished for something edgier and more discordant, something more to hang onto, from Trent Reznor and Atticus Ross's ("The Social Network") score. "The Girl with the Dragon Tattoo" is a good enough thriller with fine production values, but it's not top notch Fincher. Where it should have shrieked and howled it only occasionally rattles the windows.