The Girl Who Played with Fire 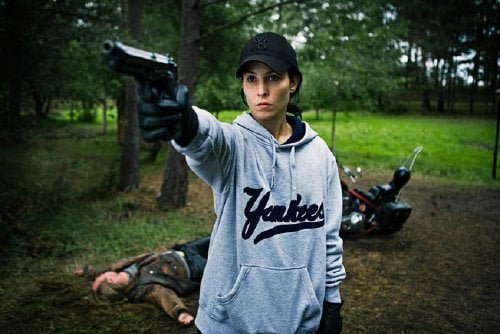 Millennium magazine editor Mikael Blomkvist (Michael Nyqvist) and his team are investigating a sex trafficking ring operating in Sweden. The investigation ends in the brutal execution of two of his key reporters and Lisbeth Salander (Noomi Rapace) is the prime suspect in these murders, Lisbeth, with Mikael’s online help, must find the real killers and clear her name in “The Girl Who Played with Fire.”

After their successful pairing solving the Harriet Vanger disappearance, Mikael Blomkvist (Michael Nyqvist, "The Girl with the Dragon Tattoo") is distressed that Lisbeth Salander (Noomi Rapace, "The Girl with the Dragon Tattoo") has disappeared without a trace. Millennium Magazine must move forward, though, and Blomkvist is excited about the upcoming expose on human trafficking whose participants will scandalize the nation. When the young couple who researched and wrote the article are murdered, though, Blomkvist begins to get computer communiques from Lisbeth, just as she is fingered as the number one suspect and "The Girl Who Played with Fire." What a reversal from "The Girl With the Dragon Tattoo!" Taking over for the final two installments from director Niels Arden Oplev, Daniel Alfredson exhibits even less visual style than his predecessor. Also newly on board is Jonas Frykberg adapting the second (and third) of Stieg Larsson's Millennium trilogy with more respect for the author's myriad threads. Of course, the fact that Salander is more of a ghostly presence this time around and does not share screen time with her costar until the film's final minutes may have not given him much choice. So, my complaints about the original's adaptations have been abated, but the film is less satisfying overall. Rapace has less to work with here as well, relegated mostly to astonished reaction shots and grim determination. Still, as the second book makes patently clear, the mystery that really is being solved is Lisbeth's past and that's enough to keep us hooked. When Dag Svensson (Hans-Christian Thulin) and Mia Bergman (Jennie Silfverhjelm) are murdered, execution style, the murder weapon is found on the premises sporting Salander's fingerprints. No sooner has the weapon been traced back to her guardian, Nils Bjurman (Peter Andersson, "The Girl with the Dragon Tattoo"), than he is discovered shot in the head in his apartment. Salander's face is splashed everywhere as an armed and dangerous suspect. Blomkvist is steadfastly unconvinced and begins to look to Dag and Mia's work for clues. The name of Zala, a mysterious and feared criminal element, keeps cropping up and Lisbeth concurs in an online exchange with Blomkvist's deductions that he is the one to track down. Blomkvist keeps several steps ahead of Inspector Jan Bublanski (Johan Kylén) and Inspector Sonja Modig (Tanja Lorentzon), who, unbeknownst to them, are working with members of the circle Dag's article was about to expose. Meanwhile, the great blonde giant (Mikael Spreitz, excellent) who attacked Lisbeth in the film's early goings kidnaps her former roommate Miriam Wu (Yasmine Garbi, "The Girl with the Dragon Tattoo") and as Lisbeth's forming sparring partner, famous Swedish ex-boxer Paolo Roberto (himself), had been waiting to talk to Wu himself (at Blomkvist's request), he tails them. Both try and take the giant on and both fail but they escape the inferno he sets for them. Meanwhile Lisbeth discovers documents about her past at Bjurman's summer cottage. Unfortunately, she also locates Zala before Blomkvist does. Larsson's themes of female victimization, corruption and Sweden's Nazi past are followed through in Frykberg's adaptation, which wisely throws out Larsson's silly opening (Lisbeth returning to Sweden after a breast enlargement!) and a few other subplots that time would not permit (Erika's secret dealings to leave Millennium to take on the top editor post at Sweden's biggest newspaper, Lisbeth's visit to Dag and Mia's, and Inspector Sonja Modig's navigation of sexual harassment within the police force). Blomkvist's long standing affair with Millennium editor Erika Berg, so needlessly excised in the first film, is simply presented here as if it existed all along. Alfredson may not have a lot of visual flair (a scene of Salander escaping on a motorcycle looks like it came from a 70's TV movie and a flashback to Lisbeth's past in an asylum is bobbled), but his camera placement is adequate and he knows how to pace. Larsson's story is all here. And so, what do we make of a story whose climax may make one realize that our heroine shares initials with Luke Skywalker (Lisbeth, I am your father!)? It's difficult to say, but as interesting as Lisbeth Salander may be, her tale may turn out to just be pulp fiction.

This is the screen adaptation of the second novel in the series by the late Stieg Larsson. The first of his trilogy brought to the theaters was the internationally popular “The Girl with the Dragon Tatoo.” Director Daniel Alfredson brings back the stars of “…Tatoo,” Rapace and Nyqvist, to reprise their characters of Lisbeth and Mikael in a murder thriller about corruption in the highest levels of the Swedish government. There are actually two stories going on here. One, the bloody aftermath of the trafficking investigation with Blomkvist siding with Lisbeth, knowing she is not the murderer, and his trying to convince the authorities of her innocence. The other deals with Lisbeth on the lam as she works very hard to clear her name. These paths intersect through the twists and turns of the film, making this a coherent, serious thriller. We will soon be visited by the American remake of “The Girl wit the Dragon Tatoo” and, if successful, will undoubtedly spawn a remake of “The Girl Who Played with Fire.” I hope it is not a case of diminishing returns.