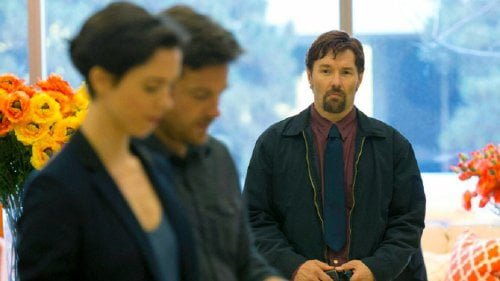 Young couple Simon (Jason Bateman) and Robyn (Rebecca Hall, "Vicky Cristina Barcelona," "The Town") Seem a bit muted in their enthusiasm as they tour the mid-century L.A. home they decide upon after their move from Chicago for Simon's promising new position at Orthus. As he pays for new furniture, he's approached by a man he fails to recognize until Gordo (Joel Edgerton, "Warrior") prompts their shared high school connection. Robyn is sympathetic to the socially awkward stranger but the day after they share dinner, Simon reacts harshly when she shows him "The Gift."

As a founder of Australia's Blue Tongue Film Collective, writer/director/star Joel Edgerton wrote the twisty thriller "The Square," directed by his brother Nash. With "The Gift," he makes his feature directorial debut and cements his command of the genre. The film begins, as its trailer insinuates, like a creepy stalker flick, but Edgerton continually throws out lures to hook then subvert audience expectations. Have you ever been made uncomfortable by an acquaintance's unrealistic embrace of your relationship? This is Gordo, a man quick to welcome Simon and his bride back to his old environs. First they find a bottle of wine at their door, perplexed as to how he knew their address (it is clearly stated by the store clerk when they first meet, the type of subtle throwaway that goes unnoticed amongst everyday transactions that is a strong element of Edgerton's toolkit). Then he shows up the next day asking for Simon, who obviously wouldn't be there, giving Robyn a list of area services and hanging around until he's invited in, accepting a dinner invitation. Gordo's far from charmed, warning Robyn not to refill Gordo's wine glass as the man latches onto his host's high school presidency motto 'Simon Sez' to expound upon everything the man has (a good job, beautiful home and wife), appearances suggesting he does not. And yet the following day there is another gift, an expensive one, their empty koi pond now filled. Robyn's overwhelmed by his generosity while all Simon sees is trespassing. As the situation escalates, Edgerton drops odd little hints that only come into focus as his story accelerates. Robyn's drawn to neighbor Lucy (Allison Tolman, TV's 'Fargo') after noticing her baby, then shows undue interest in her medicine cabinet. Simon's overly assertive about cutting ties with Gordo, canvassing new friends then unexpectedly taking action without consulting his wife. On the job when he's backed by boss Kevin (Tim Griffin, "American Sniper") for a promotion, he wrangles his competitor's name from his ally. Edgerton uses Simon's house, its glass walls turning them into fish in a bowl, to create unease ("A Single Man's" Eduard Grau turns the cinematographic obstacles into pluses). Those koi end up belly up, the couples dog Bojangles disappearing. Sound, too, adds to the tension, Robyn often feeling she's not alone in her home. In a witty bit of self-referential scripting, Simon assures Robyn all they need is time before Edgerton jumps into a montage that appears to confirm his claim. In front of the camera, Edgerton presents Gordo as somewhat simple, his awkwardness open to interpretation. Bateman masks early aggression as harried annoyance, gradually revealing his character's suspicious nature as self protective secrecy, winding himself into higher and higher levels of paranoia. Hall projects a gentle, submissive nature that supports later revelations. While there are a few nits that could be picked when all is out in the open, Edgerton darts and dodges more nimbly than most (Soderbergh's 'twisty' "Side Effects," for example). "The Gift" may occasionally show its hand, but it's a damn satisfying genre movie crafted with care. The movie that we leave is a far different one than we started with. Grade: