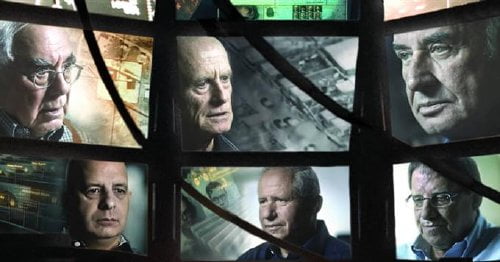 Shin Bet, Israel’s internal intelligence service, is responsible for the country’s state security, including exposing terrorist activities, counter-terrorism in the West Bank and Gaza, counter espionage and securing important internal infrastructures. Six former leaders of Shin Bet, whose combined service totals over 30 years, air their thoughts and views on the rights and wrongs made by the Israeli government through the decades. These men are “The Gatekeepers.”

Writer/director Dror Moreh looks at Israeli's conflict with Palestine from the inside out, talking to the six men who have headed Shin Bet, Israel's secret intelligence agency, who provide information, and sometimes even make decisions for, Israeli's Prime Ministers, since 1980. These six men were responsible for Intel from Gaza and the West Bank and their Government relied upon them as "The Gatekeepers." That Moreh got all the heads of Israel's secret service group for over three decades to speak to him and his cameras was already quite the accomplishment. That he has gotten, to one varying degree or another, a surprisingly consistent message - that Israel's policies toward Palestine are folly - is amazing. Working in a manner extremely consistent with Errol Morris, Moreh intercuts talking head interviews with archival stills and footage and cutaways to stylized shots of file cabinets and banks of monitors, stopping just short of a Philip Glass score). The format proves effective. Right out of the gate, Shin Bet's most recent head, Yuval Diskin (2005–2011), discusses the difficulty of being in a position where one is asked to make black or white calls within a very gray playing field. Diskin seems predisposed to have been left of center and his experiences have pushed him further. Moreh jumps from his first subject for the most extreme opposite of viewpoints from another generation, that of Avraham Shalom (1980-1986), who talks about being happy when Palestinian terrorism began because it gave his kind jobs. Shalom had to resign over the 300 bus incident, when the media got photos of two Palestinian terrorists being led away in handcuffs from the hijacked vehicle to be summarily executed, bringing questions of morality into the debate. Shalom may be more of a hard liner (one of his successors states that people were afraid of him), but Moreh includes the man's criticisms of his own past, including parallels made to Nazi Germany, as the film goes along. The director doesn't stick to a linear timeline, instead finding similar themes to jump from one subject to another. This device is most startling when we hear Avi Dichter (2000-2005) talk about how all Israeli soldiers need for training is 10 words (yet mispronunciation could render 'We're here to count you' as 'We're here to castrate you.'), yet Yaakov Peri (1988-1995) states that those in the organization who knew Arabic knew it so well, they could even read between the lines of what was being said. Despite the jumping among interviewees, however, over the course of the film we nonetheless get a linear history of the Arab-Israeli conflict. Shalom was succeeded by Peri who was surprised by the Intifada (Shin Bet never saw these insurgencies coming, nor did they prevent the Rabin assassination, two massive failures which go relatively unexplained). Carmi Gillon, only in the position for two years, was haunted by the assassination which happened on his watch, although he can also take credit for cleanly taking out Hamas bomber, Yahya Ayyash, 'The Engineer,' with a cell phone explosive. That operation was led by Avi Dichter, who headed Shin Bet from 2000 to 2005, after Ami Ayalon (who states that after retirement, 'we go to the left'). From these men we hear sympathy for the plight of the refugee, outrage at illegal settlements and the lack of justice delivered to their own Underground terrorists who came close to setting off a global Islamic war. One talks about insight given by a Palestinian psychiatrist who tells him they are doing just what the Palestinians want - Hamas bombers trigger F16s and the cycle of hurt and revenge never ends. It is painful to reflect on the Israeli opposition to the Oslo Accords, now just a memory, which won Rabin the Nobel Peace Prize but cost him his life (one funeral attendee wears a sign stating 'I am ashamed.') and see how the Fateh and PLO were replaced with Hamas and the Islamists. So many missed opportunities, so much fuel added to the fire. "The Gatekeepers" ends with discussion of a prediction made in 1968 by academic Yeshayahu Leibowitz warning against occupation and stating that Israel would become a 'Shin Bet State,' its morals degraded. This brave documentary draws a line in the sand. One just wishes Moreh had asked these men what they were doing to change the situation now other than having changed their minds.

Only an Israeli filmmaker could have made a documentary that draws criticism of the Israeli government, its treatment (and mistreatment) of the Palestinians, the illegal settlements and its responsibility in creating the terror problem today. The six interviewees – Ami Ayalon, Avi Dichter, Yuval Diskin, Carmi Gillon, Yaakov Peri and Avraham Shalom – were all chiefs of Shin Bet for different periods of Israel’s turbulent history and all speak frankly about their nation. Dror Moreh, the film’s director, gets his subjects to talk at length about how terrorism in Israeli began because of anti-terror methods used by the IDF, the occupations beginning after the Six Day War in 1967 and the internationally illegal building of the Jewish settlements on Palestinian land. One of the former chiefs even compares the spread of the settlements with the German army occupation of parts of Europe during WWII. These men do not hesitate to tell it like it is (and was). There is an “I was only following orders” air of excuse in the testimonies of these high-level security spooks. They were responsible for the violent deaths of many of Israel’s “enemies” with clandestine attacks that were supposed to limit collateral damage on civilians – but do not. These men see themselves as patriotic pawns carrying out the whims of their leaders. They may protest their deadly orders but carry them out nonetheless. Filmmaker Moreh gives a unique look, from those in the know, of the inner workings of Israel’s home intelligence service.