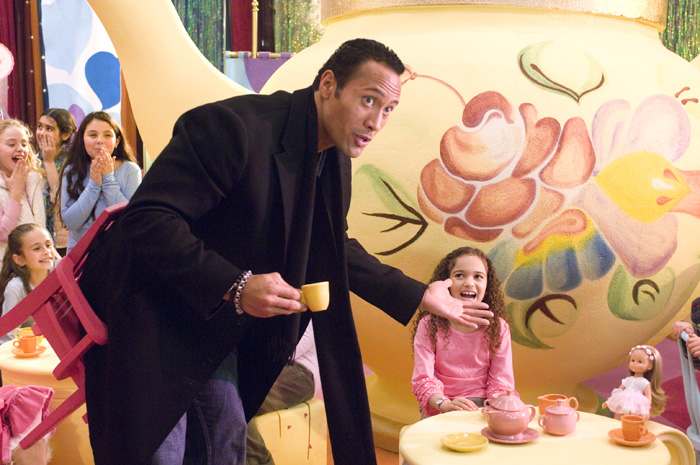 Joe 'The King' Kingman (Dwayne "The Rock" Johnson) is Boston's most famous bachelor, the star quarterback of potential championship football team The Rebels. The wealthy, sought after party magnet thinks he has the world under his thumb until he's undone by the eight year old daughter he never knew he had. Once Peyton (Madison Pettis, TV's "Cory in the House") shows up on his doorstep announcing mom's gone on an African aid mission and he has to babysit, Joe fumbles, then realizes he has to come up with "The Game Plan."

Fledgling screenwriters Nichole Millard and Kathryn Price (who collaborated on story with "Under the Tuscan Sun's" Audrey Wells, who also has Disney's "The Kid" under her belt) follow the hoary blueprint for this adult-undone-by-a-child clashing 'sport' cliche and director Andy Fickman ("She's the Man") doesn't encourage subtlety, but The Rock's charm and romantic interest Roselyn Sanchez's mischievous warmth make "The Game Plan" an easy sit. Madison Pettis has cuteness to spare and could become a child star if her mugging tendency is kept in check. The story is assembled via checklist. The teammate friend who values family over frivolity? Travis Sanders (Morris Chestnut, "Boyz n the Hood," "Ladder 49"), check. The nonmaternal agent with her own agenda (aka the villainess)? Stella Peck (Kyra Sedgwick, TV's "The Closer"), check. Macho aesthetics undone by girliness? Footballs and streamlined leather vs. ballet and pink frills, check. The hero laid low by his own lifestyle? A night on the town garners bad dad reviews - check. The kids' talent show that looks like a Hollywood production? Check. Joe even owns a bulldog predictably named Spike who turns out to be a cuddle bunny and the Disney brand assumes we won't find a Coca Cola product placement at all unusual when professional athletes get together to watch a game. Casting really matters here and while The Rock starts off broad, he settles into his flashy character when he is pitted against Sanchez ("Rush Hour 2," TV's "Without a Trace"), a ballet instructor with backbone unimpressed by sports stars. He is humbled by her, yet not humiliated, and their chemistry makes one wonder why Sanchez hasn't been seen more on the big screen. She seems to have a good effect on Pettis, too, who seems more like a little girl (and talented dancer!) and less like a precocious screen tot under her influence. To give the screenwriters a little bit of credit, they've come up with third act twist that adds believability and emotional heft to Peyton's actions (we learn early on mom was not complicit in the visit to dad) while conveniently making the inevitable sugary ending make more sense than it otherwise would have. Did we really need "The Game Plan?" Kids might think so, as the preteen audience at the screening I attended seemed to find a lot of laughs, but while adults might be inclined to roll their eyes at least they won't need to be as padded as the players to sit through this.