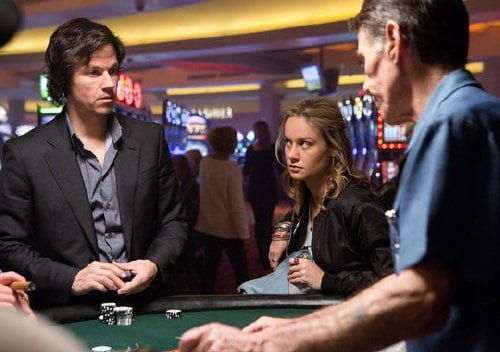 Jim Bennett (Mark Wahlberg) has a vocation, as a professor of literature, and a devotion, as a high stakes gambler. Things get problematic when Jim’s father, on his deathbed, tells him that he will inherit nothing. This triggers a take-all-risks spiral of wagering that will put in danger both his family and “The Gambler.”

Jim Bennett (Mark Wahlberg) is a college English professor from a monied family who's just been told by his dying grandfather he'll get no inheritance. Bennett, who tells his students that if they're not at the genius level writers they should just forget it, continually risks everything in his own attempt to be prevail as "The Gambler." This remake of Karel Reisz’s 1974 film from a semi-autobiographical screenplay by James Toback features a great performance by John Goodman and falls together well enough as its anti-hero keeps shuffling his deck the more he's backed into a corner, but Rupert Wyatt's ("Rise of the Planet of the Apes") direction of William Monahan's ("The Departed") adaptation never really gets us into his protagonist's head. The film's about as deep as a tub of popcorn, but it makes for a tasty enough snack. Jim's immediate response to the Bennett patriarch's death is to march into Mr. Lee's (Alvin Ing) casino where he's given a loaded look from female employee Amy Phillips (Brie Larson, "Short Term 12") who we only later learn is his star pupil. After turning 10K into 80 in short order, Bennett, whose MO is to continually double down, loses it even faster, increasing his debt to Lee's establishment to $240K. He's told he's out of credit and has 7 days to pay, but he's been observed by Neville Baraka (Michael K. Williams, HBO's 'Boardwalk Empire') who agrees to stake him 50 more at 20 points. Now he has two guys breathing down his neck. In class, Jim scoffs at his own published work, a case of 'getting good reviews from people he's given good reviews to,' and singles out Amy as the class's only real writer. He's got two other students who aren't doing well in his class but who exemplify his credo - state tennis champ Dexter (Emory Cohen, "The Place Beyond the Pines") and NBA-headed basketball whiz Lamar (Anthony Kelley) - the latter of whom has his own ticking clock to worry about. As his class dwindles in size, his debts mount, leading him to legendary loan shark Frank (John Goodman) who dispenses advice like a mentoring uncle, but also the direst threats. Turned down by Frank, Jim is forced to turn to his mother, Roberta (Jessica Lange), who tells him this is the last time she'll bail him out. So Jim picks up Amy and heads to Vegas with $240K in cash. Wahlberg, on the verge of channeling Warren Beatty with his coiffed head of hair and emotional reserve, is adept at slinging some verbose and tricky dialogue, but not at conveying what makes his risk-taking underachiever tick. Larson, who's crafted much from little in films like "Don Jon," has nothing to work with here in a dismal girlfriend role. Lange fares a bit better dispensing caustic tough love if not filling in familial blanks. It is John Goodman, looking like Jabba the Hut clad only in a towel when first met, who holds the straight flush, his reasonable wisdom at hilarious odds with his graphic intimidation. Where Ing and Williams display a whiff of sympathy for their client, their goals are self serving. Goodman's Frank is much more complex, a Guardian Angel from Satan's army. Wyatt builds suspense with his house of cards climax, but like his protagonist he cannot quit while he's ahead, tacking on a cliched wrap with no payoff. Grade:

This is a remake of the 1974 film of the same name, starring James Caan, and I have to say, the earlier film has stayed with me longer – and I just saw the remake. I think the problem is the coolly detached way that Jim faces every self-made adversity. He borrows money from a Korean loan shark, only to lose it in his go for broke gambling style. Then, he borrows from a notorious gangster, ostensibly to pay off the loan shark, and gambles that away. Then, he hits on his well-to-do mother (a terrific Jessica Lange) for money to cover his growing gambling debts and…. You can guess how this is going to turn out. The best things about “The Gambler” are the supporting characters. Jessica Lange is, as I said, terrific as the mother who cannot help her need to keep helping her son – even knowing his self-destructive personality. John Goodman gives the as-usual great performance as the Buddha-like sage and loan shark, Frankie, and gets the film’s best lines. Michael Kenneth Williams, as Neville, is a menacing gangster that you do not want to get on his wrong side – and Jim does so, repeatedly. Mark Wahlberg is so detached, even aloof, as Jim that the character never garners my sympathy, only pity and, as to why would he do such stupid things, confusion. This makes me keep the so-called hero at arms length when, in fact, I should embrace him. There is no sense of remorse or, even, loyalty about Jim and this is a problem. “The Gambler” is entertaining in a dark, slick way and there is some fine acting by some fine actors.