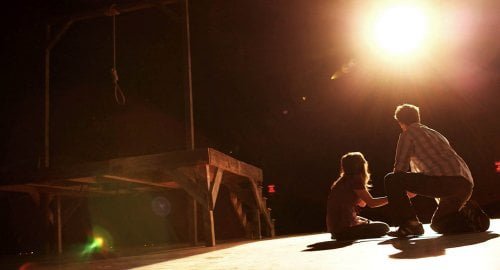 In 1993, Beatrice High School's production of a play went horribly wrong, understudy Charlie Grimille (Jesse Cross), who'd stepped into the lead role, dying accidentally in front of horrified students, parents and school staff. Twenty years later, despite rumors of hauntings in the school's auditorium ever since, drama queen Pfeifer Ross (Pfeifer Brown) has fought for and won the school's approval to honor the tragedy with a restaging of "The Gallows."

There is not one single thing to recommend this found footage film. Writer/directors Travis Cluff & Chris Lofing's story of the accidental hanging of the kid who was to be the hangman is nothing but chaos digitally filmed with annoying swish pans and supposedly creepy electronic noise. "The Gallows" is the longest 80 minutes I've spent in a theater this year. Ryan Shoos (Ryan Shoos, yes, because perhaps it was too difficult for this cast and crew to remember character names) is an annoying jock who records everything on his phone and is particularly fond of humiliating his fellow students. After teasing the guy mercilessly, he figures out that the reason his fellow football player and all around nice guy Reese (Reese Mishler) has agreed to play the lead in the new production is a crush on Pfeifer, so of course Reese goes along with his plan to enter the school the night before the play and destroy its sets. Ryan's cheerleader girlfriend Cassidy (Cassidy Gifford, daughter of Kathie Lee) insists on going with them. Things have just started getting eerie (a locker door swings open then slams shut - ayee!) when who should notice Reese's car in the lot but Pfeifer, who comes in to find out what's going on just before they're all locked in in the dark. So, first of all, what school production would have a working gallows that could actually kill someone? We know Reese is probably doomed because his biggest line, which he can barely deliver, is 'He's coming for me,' yet the kid's never noticed that his own father is the guy whom Charlie holds a noose over in the original production's cast picture, which is prominently displayed in a school hallway case? The perpetrator of the evening's mayhem is easily identified in the film's early goings. There is nothing remotely scary about anything that happens. The cast runs around and screams a lot. At one point when the group is split up, we see events happening to both although there's only one person accounted for shooting the footage. The ending is ridiculous (and just who shot that?). As the country's greatest documentarian, Frederick Wiseman, is resorting to crowd funding for his next film, "The Gallows" is opening on over 2,700 screens via a major distributor. Sure, it's a business and this is clearly a very low budget production that will turn a profit, but that doesn't make it any less depressing. Grade: