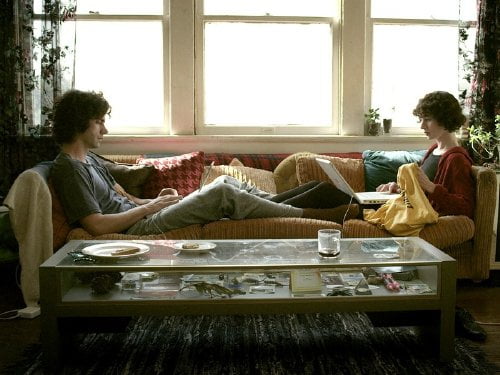 When they find an injured, homeless cat they name Paw-Paw, Sophie (writer/director Miranda July) and Jason (Hamish Linklater, Julia Louis Dreyfuss's younger brother in 'The New Adventures of Old Christine') are faced with a 6 month and possibly longer commitment to a pet diagnosed with renal failure. Given an appointment to pick up Paw-Paw in thirty days once its injury has healed, the couple begin to stress contemplating "The Future."

Six years ago, July's first feature "Me and You and Everyone You Know" anointed her as some kind of indie darling and I'm still at a loss as to why. With her second film, July once again is a character who is an insecure and unsuccessful artist throwing herself at a man to be taken care of. This issue is compounded by her predilection for 'playing house,' "Me's" Sylvie doing so literally while building a hope chest, July's Sophie an arrested adolescent pretending to be an adult. At least in her first film, the pet who died was not her own, a stranger's goldfish given a eulogy. "Future's" pet is a cat that is treated cruelly and irresponsibly, not least by the cutesy voice y Miranda herself. Her films are at once too twee by half and offputtingly perverse (see also "The Center of the World," which she helped to write, a film that was at once shallow and aggressively sexual). And yet, there is talent there, as evidenced here with a structure that plays with time in unusual ways. There are also occasional flashes of wit, like a Mummenschanz routine performed within a travelling t-shirt by a woman who has been too paralyzed to create the thirty days of youtube dances she set out to. July also has a keen sense of casting costars, having first chosen the then little known John Hawkes and now the charming, under-exposed Linklater. With thirty days stretching out ahead of them as their last 'me time' for a while, they each decide to put a stake in the ground. Jason gets signed up by a 'Tree by Tree' organization and begins petitioning door to door for donations, his first encounter pitting him against a 'no solicitation' sign. Another cold call sets him up with a rambling old man who sells ancient appliances and owns many of the same knickknacks that grace Sophie and Jason's apartment, a sentimental vision of Jason's future. Meanwhile, Sophie, a children's 'dance instructor' (read babysitter), has been gobsmacked by an amateur dance video made in someone's bedroom and posted on youtube and decides to wow the online world. Days go by with no results. Then the drawing of a young girl with her bunny which Jason bought at the animal shelter peels from their wall and Sophie calls the artist's number written on the back. She goes to visit Marshall (David Warshofsky, "There Will Be Blood," "Unstoppable") who has a real house and real business and falls into an affair. Jason begins to suspect something's up and appeals to the moon which stops time until he decides what to do. I wished he'd just move on. Unfortunately, the moon needs help restarting the clock as Paw-Paw still sits contemplating the nature of thirty days within a cage when time was meaningless before. Sophie also tries to get her job at the dance academy back, mainly to give Marshall the illusion she has somewhere to go during the day, but can only rejoin as a receptionist. Two old girlfriends mentioned early on arrive and go through their entire pregnancy terms, their children growing to outlive them all during the same conversation. Has life passed Sophie by? "The Future" is a quirky little film with some humorous little touches, but what its author is trying to say is murky and its protagonist engenders no sympathy, in fact the opposite. The cult of July can continue without me.