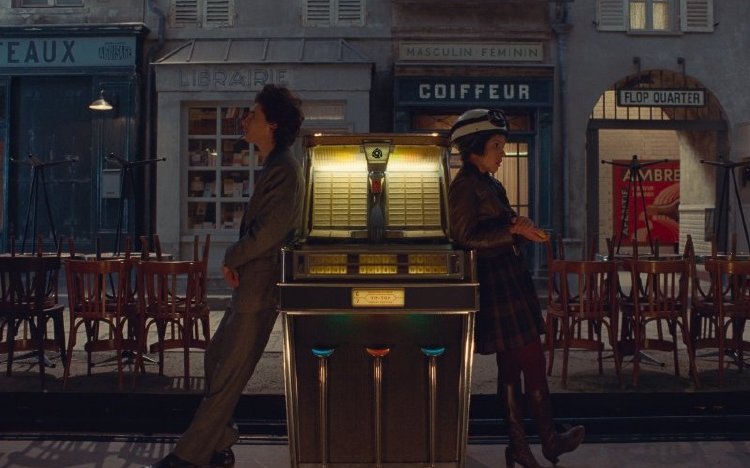 When their beloved editor, Kansan Arthur Howitzer, Jr. (Bill Murray), dies, the staff of his Ennui-sur-Blasé based American magazine memorialize him with four stories in the latest edition of “The French Dispatch.”

Writer/director Wes Anderson is an acquired taste for many, but even fans of the filmmaker may be let down by his latest which is packed with surface pleasures but lacks cohesiveness and character development, playing more like a series of New Yorker cartoons than a deep dive into the venerable magazine.  (Rather than go into who all the characters are based on here, I link to a New Yorker article which does.)

The film presents its titular magazines offices based in the fictional city of Ennui-sur-Blasé(!) with typical Anderson whimsy including sectional views, centered characters looking directly at the camera, visual gags, background action and vintage props.  Considering his subject, Anderson also has fun with language here, his intellectuals delivering flowery language with rat-a-tat-tat speed and a deadpan monotone.

There are four stories presented with a wraparound about Howitzer, Jr.’s beginnings with the Liberty, Kansas Evening Sun where The French Dispatch began as its Sunday supplement.  Howitzer loves his writers so much, that even given his stringent writing rules he appears to accept any excuse to ignore them, like the fact that his ‘Cycling Reporter’ Herbsaint Sazerac’s (Owen Wilson) travel pieces gravitate towards the sordid and seedy, as we see in his piece on Ennui itself where dead bodies appear in the Blasé River with alarming consistency.

Art critic J.K.L. Berensen (Tilda Swinton) delivers ‘The Concrete Masterpiece,’ the best of the film’s four episodes which features a battle of wits between painter Moses Rosenthaler, incarcerated in Ennui’s insane asylum, and dealer Julian Cadazio (Adrien Brody), who finds he must coax his artist in untraditional ways.  The piece is hilarious due to Rosenthaler’s muse and subject, stern farm girl turned prison guard Simone (Léa Seydoux, a highlight), Rosenthaler’s unorthodox methods and the fact that viewed head on, I finally noticed that Brody’s nose looks like it was drawn on by Picasso.  This segment not only has a wonderful punch line, but Swinton’s Kansan character’s overbite is perhaps the best thing about the entire movie.

Next up is ‘Revisions to a Manifesto’ about the student ‘chessboard’ revolution led by the wild-haired Zeffirelli B. (Timothée Chalamet) and written about by Lucinda Krementz (Frances McDormand) who assists with his manifesto and becomes his lover until the more age appropriate Juliette (Lyna Khoudri) muscles her out.  (And speaking of muscles, a joke about Chalamet’s is featured not only here but in his other movie opening on the same day, “Dune” – let just call him ‘Muscles Chalamet’ going forward.)

The last segment, ‘The Private Dining Room of the Police Commissioner,’ began to wear me out, its chases and shootouts moving from live action to animation and back resembling the jail sequence from “Paddington 2” crossed with 30’s French crime dramas.  Better is its high brow introduction from a television talk show where host Liev Schrieber interviews the plummy Roebuck Wright (Jeffrey Wright).

Anderson flips from color to black & white throughout the film and there are so many name cast members this film could spark its own ‘6 degrees of separation’ game (many are Anderson regulars like Edward Norton, Jason Schwartzman, Saoirse Ronan, Willem Dafoe, Mathieu Amalric, Tony Revolori, Fisher Stevens and Anjelica Huston but there are also many newcomers like Christoph Waltz, Elizabeth Moss, Rupert Friend, Henry Winkler and Lois Smith, who’s blunt spoken art collector Upshur 'Maw' Clampette is a gem.  I haven’t even named everyone, but this vast ensemble is emblematic of this film’s favoring of character quirks over fully drawn people.

“The French Dispatch is always fun to look at and sporadically entertaining, but given its inspiration it is found lacking.

Searchlight Pictures opens "The French Dispatch" in theaters on 10/22/21.