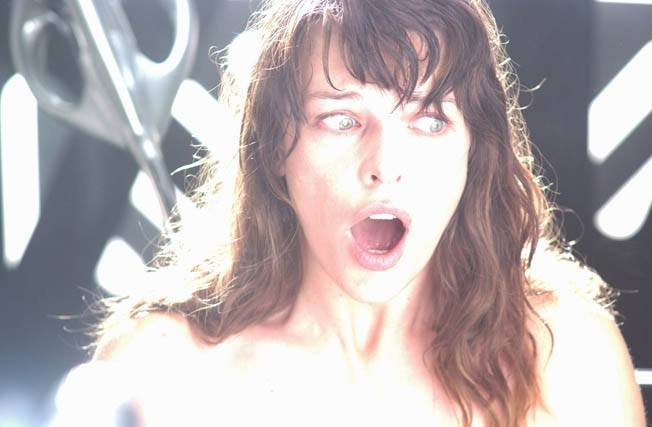 Psychiatrist Abigail Taylor (Milla Jovovich, "Resident Evil"), still grieving over the murder of her husband, continues his work in Nome, Alaska, where an abnormal number of patients are all reporting similar experiences. Scott Stracinsky (Enzo Cilenti, "In the Loop") wakens every night around 3 a.m. and tells of a white owl that stares at him for hours on end, but when Abbey puts him under he is undone by what he remembers and she begins to believe that the people of Nome are experiencing alien contact of "The Fourth Kind."

Writer/director Olatunde Osunsanmi, who's never seen a 180 degree pan he didn't like, begins his film with his lead actress as herself addressing the camera directly to tell us that what we are about to see is real archival footage and real archival audio. If you see this film and believe that, I've got a bridge I'd like to sell you. Osunsanmi is clearly betting on a "Blair Witch" vibe, but his film is contradictory, over the top and poorly acted. It seems as if someone's rediscovered 1970's "Chariots of the Gods" and taken it to heart. The first evidence we have that Osunsanmi is playing with the truth is that Jovovich earnestly informs us that some of the subjects have had their names and professions(!) changed, and yet they all clearly appear in 'archival' footage. In an effort to make us believe what we are seeing is real, the writer/director uses split screens to pair up reenactments with his real stuff, but all he achieves is to make his audience wonder why, if what he had was so powerful to begin with, he needed to reenact it at all. He further shoots himself in the foot by having his lead character demanding her daughter back under hypnosis when she is recalling a night before her daughter was ever taken. The actress who portrays the 'real' Taylor is made up to look like a ghoul, a gray image set within a color background, whose efforts to appear emotionally shattered result in a lisping, childish babble that belies her supposed medical background. The story? Taylor witnessed her husband being stabbed to death in their bed right beside her, but has blocked out any memory of the killer. He was involved with a number of patients suffering sleep deprivation and was reading a book a lot like Erich von Däniken's. Abbey contacts the author in Africa and he flies right on over to Alaska to tell her the weird voice on her dictaphone is speaking ancient Sumerian and that it doesn't sound human. She gets scary results when she puts people under and the local Sheriff (Will Patton on acting crack) wants to arrest her after Scott's back is broken post-session, but she's backed up by her mentor (Elias Koteas as the skeptic who becomes convinced) who also witnessed the hair raising event (UFOs usually cause electronic blackouts, but here even remembering them under hypnosis seems to jam videotape). Abbey's young son thinks she's nuts and talks like a thirty year-old while her younger daughter has lost her sight since dad died. One night, under police surveillance, they're all beamed out of the house but Abbey isn't beamed back. The Sheriff is more convinced of Abbey's criminal activity even though one of his own men witnessed the event. Osunsanmi, who interviews the 'real' Taylor on a video with a Chapman University bug to give it the air of authenticity, almost seems bored by his own story. There are too many obvious answers to the events he sets forth (um, put the sleep deprived into a monitored sleep deprivation lab anyone?). I'd love to be at a screening of "The Fourth Kind" in Nome, where it's sure to be greeted as a comedy.