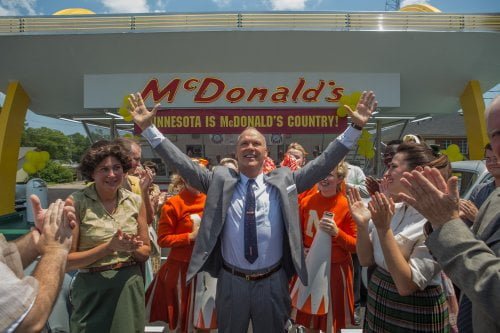 You would be hard pressed to find an average American who has NOT eaten at a McDonald’s at some time in his/her life. But, few know the history of that iconic corporate juggernaut. That story is told in a matter of fact, like it or not, way in “The Founder.”

Ray Kroc (Michael Keaton), in the early 1950s, was a milk shake mixer salesman struggling to make a living in the mid-west. After a dearth of sales, he gets an order for six multi-mixers from a restaurant in San Bernardino, California owned by the McDonald brothers, Dick (Nick Offerman) and Mac (John Carroll Lynch). Intrigued by the possibility of opportunity, Ray travels across the country to pay the brothers a visit. Ray, a frequenter in his sales travels to many restaurants, is used to waiting a long time for his order and having it, frequently, wrong. He is stunned to find an operation where an order is filled in 30 seconds, instead of 30 minutes, and as you want it. The ambitious believer in Norman Vincent Peale’s book, The Power of Positive Thinking, sees the enormous potential in giving the customer their food fast and correct. The idea of “franchise” will play big in Kroc’s grand plan. The story, by Robert D. Siegel, is directed by John Lee Hancock, and gives straightforward treatment to the Ray Kroc legend. But, Ray was not, as presented in the film (and other outlets), a compassionate man. In fact, as shown, Kroc was both ruthless and unscrupulous, famously bilking the McDonald brothers of millions of dollars by reneging on a hand-shake deal. Ray Kroc’s self-centered methods and Peale-esque drive do not make for a sympathetic character. Michael Keaton does not sugarcoat Ray or make his dealings any more acceptable to the viewer. This negative view of Ray, very well played by Keaton, does not make for a feel good movie, but it is an interesting look into the history of what became the largest food conveyor in the world.