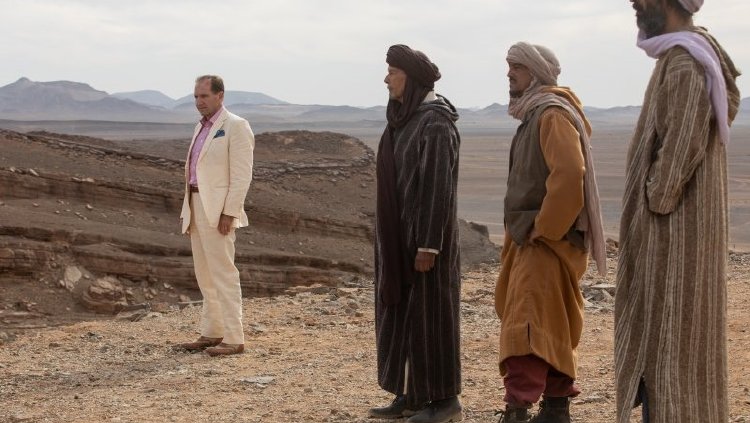 At a stopover in Tangier on their way to a decadent party at a Saharan castle (or ksour), British surgeon David Henninger (Ralph Fiennes) and his American children’s book author wife Jo (Jessica Chastain) are already at odds, he entitled and sour about everything, she noting he’s killed an entire bottle of wine before having to drive quite a distance.  They are arguing as he speeds down a remote dirt road in the darkness when two Moroccan teenagers approach, hoping to sell a fossil to rich Westerners, and David plows right into one.  They arrive at Richard (Matt Smith, "Last Night in Soho") and Dally’s (Caleb Landry Jones) with a body in their trunk, hoping Richard’s connections will make the problem go away, but when the boy’s father Abdellah Taheri (Ismael Kanater) arrives, David faces an ultimatum in “The Forgiven.”

Adapting Lawrence Osborne’s novel, writer/director John Michael McDonagh ("Calvary") has made a film about two characters that diverges into two films, one far more successful than the other.  Beginning with Morocco’s usual ex-pat mix of British, French and American and the native Arabs they all mostly ignore, we can be amused by some (Landry Jones’s wannabe Bohemian, Abbey Lee’s stunningly oblivious party girl), but most are generally repugnant, even if that revelation is more gradually revealed in some cases.  This in and of itself is not the problem, as the story’s very point relies on it, but one feels such a strain to craft their ‘witty’ conversation as literary, it turns into a parody of itself.

At first, it is David who appalls us with his comments about the boy he struck being a ‘nobody’ he merely regards as an inconvenience he has no responsibility for.  Jo, on the other hand, continually expresses horror and guilt.  But once his host, who has since regretted inviting him, throws him into what they have all been referring to as ‘ISIS country,’ telling him observing Abdellah’s professed custom is his only choice, David begins to observe the world around him, receiving an important lesson in empathy and humility.  Fiennes transforms his character slowly and with no small amount of resistance, beautifully supported by Kanater, whose character keeps surprising, and, more notably, by Saïd Taghmaoui ("Wonder Woman"), who as Abdellah’s translator Anouar keeps pushing David into confronting his own moral vacancy, largely by making the dead boy tangible (‘His name was Driss.’).

Back at the ksour, Jo revels in her temporary single status, encouraging the oily charms of fellow American Tom Day (Christopher Abbott).  Much of the drunken excess is viewed through the eyes of Hamid (Mourad Zaoui, TV's 'The Night Manager'), Richard and Dally’s smoothly efficient estate runner, whose doled out proverbs are far more interesting than anything their guests have to say (‘Piece by piece, the camel enters the couscous.’).  That it is Hamid who welcomes David back and not his wife illustrates how profoundly everything has changed.

The production is handsome, adhering to real, often extreme, locations (a lush oasis was created by building a dam, an instance of filmmakers leaving things better than they found them).  Costume ranges from Chastain’s sponsored crisp Ralph Lauren wardrobe to Landry Jones’s eccentrically colorful ensembles.  The score doesn’t rise above the expected exotic Arabic, although the use of Lou Reed’s ‘Venus in Furs’ during an eerie nighttime drive is inspired.

After heartily embracing “The Guard” and flipping for “Calvary,” this one is a bit of a disappointment from McDonagh (I only just learned of 2016’s “War Is Everywhere”).  Chastain’s Jo simply isn’t interesting aside from discovering she’s not as good a person as she initially projects, but Fiennes, Taghmaoui and Zaoui make it worthwhile.

Roadside Attractions and Vertical Entertainment open "The Forgiven" in theaters on 7/1/22.