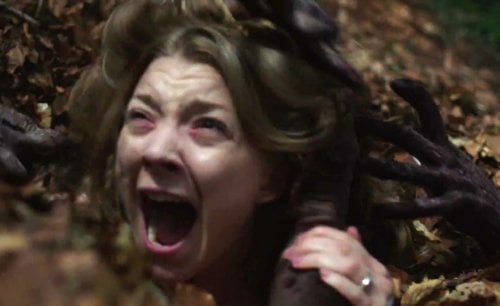 Sarah and Jess Price (Natalie Dormer) are identical twin sisters and each has always had a sense of the other, no matter how far apart they are. Jess moved to Tokyo to teach school and, about five days ago, she went missing while on a field trip to the notorious Akoigahara Forest near Mount Fuji, a place known for restless demons and where people go to commit suicide. Sarah jumps on a plane, sensing her sister is in danger, and sets off to find her in “The Forest.”

After Sara Price (Natalie Dormer, "Rush," HBO's 'Game of Thrones') has a nightmare about running through the woods, she receives a phone call from Tokyo where her twin sister Jess teaches saying she's been reported missing, the last place where she was seen a locale well known for suicides. Sara has always has a psychic link with Jess. Convinced she's still alive, Sara travels to Japan to search for her twin in "The Forest." It's one thing to begin the new year with the release of a lousy horror movie, but "The Forest" may be an even more disappointing affair given that it features a strong (dual) lead performance, production design, cinematography and sound mixing in service of a script which undermines everything it worked to establish. First time feature director Jason Zada proves himself with the technical aspects of filmmaking, but the story, which passed from Ben Ketai ("30 Days of Night: Dark Days") to Sarah Cornwell to Nick Antosca (TV's 'Hannibal') but unfortunately not the trash bucket, hangs on a psychological factor betrayed by its climax and sets up a potential villain only to leave his motivations a mystery. "The Forest" is such a frustrating experience, it revives hope in Gus Van Sant's much maligned Cannes premiere "Sea of Trees," also based on Japan's Aokigahara Forest. Producer David S. Goyer states an intention to avoid 'cheap scares' in the film's press notes, but no sooner has Sara hit Tokyo than Zada starts with the jump scares. Japanese schoolgirls with long black hair and old women with enough aging makeup that they no longer look real also abound here. Yet Dormer's tentative exploration of Tokyo beginning with Jess's school and her wary yet confident excursion to Mount Fuji's base intrigue due not only to her performance but the artfully created environs. She's no sooner enquired about her sister at a visitor information center than she's being led to a makeshift morgue in the log building's basement. And left alone. That evening at a rural inn she meets Australian travel writer Aiden (Taylor Kinney, "Rock the Kasbah," TV's 'Chicago Fire'), whose come-on line makes her think he's seen her sister. He says not, but, intrigued by her story, offers to help her search with local guide Michi (Yukiyoshi Ozawa, "The Hidden Blade") if she'll let him tell her tale. With warnings to 'never leave the path,' the trio promptly do, but even Michi cautions that any strange sights will be imagined and that no one should stay in the forest after dark when the vengeful yurei and woeful Ubasute ghosts come out to play. They quickly find a suicide, then Jess's tent from Sara's nightmare, after which Michi immediately demands they leave. Sara will not and Aiden agrees to stay with her. During the night Sara's awoken as so many before her ("The Blair Witch Project," "Willow Creek" et al.) and doesn't question the oddity of finding a schoolgirl, Hoshiko (Rina Takasaki), 'lost' in the woods with yet another portent not to trust 'him.' Dormer's capable enough to keep us invested despite the film's missteps, at least until Zada seems to throw up his hands with his climax. Her Sara, haunted by nightmares and one guilt-laden flashback, is determined to push through (her Jess is less successful if only due to the character's cliched differences, a goth bohemian to Sara's upwardly mobile conventionality). Kinney is also fine if betrayed by the material. As Sara's husband Rob, Eoin Macken ("Centurion") has little to do but denigrate his sister-in-law. Zada sets his tone well with twitching sushi and Mattias Troelstrup's ("Don Verdean") hyper-real nature shots (an overhead of the trio walking through the forest makes the actors look like miniatures in an herb garden). Sound - the crunching of leaves, rustling branches and running streams mixed with low thrums and whispery vapors - is unsettling. Too bad it's all there to dish up tropes and a rushed ending that lets plot points fall where they may. Grade:

The fabled Suicide Forest would seem to be a perfect subject for J-horror films in Japan. But, I only found four films that used the Akoigahara Forest as a backdrop – and none by Japanese filmmakers. First-time feature director Jason Zada, with a team of writers (Nick Antosca, Sarah Cornwell, Ben Ketal), tackles “The Forest” with the fervor of a newcomer to the genre. The result is a film full of jump-out-at-you moments that have been done many times before, and better. The cast is likable enough with Natalie Dormer doing double duty as the twin sisters and Taylor Kinney is an enigmatic character, as travel journo Aiden, conveniently researching a story about the forest. His immediate offer to assist Sarah in her mission raises a flag for the viewer to watch this guy, he’s no good. But, the script uses too many clichéd ideas and leaves important story threads flapping in the wind – one of them being Aiden’s. I am not a horror film fan by any stretch of the imagination but I went into “The Forest” with an open mind. Within five minutes, though, when Sarah has the obligatory nightmare to set the tone of foreboding, my hopes began to wane quickly. What transpires is a J-horror-inspired story that consists of the heroine ignoring every warning given: Don’t stray off the path; do not go into the forest; do not stay in the forest at night; everything you see that is bad [in the forest] is not real. I guess if Sarah had paid attention to all the warnings there would not have been “The Forest.” I wish she listened.