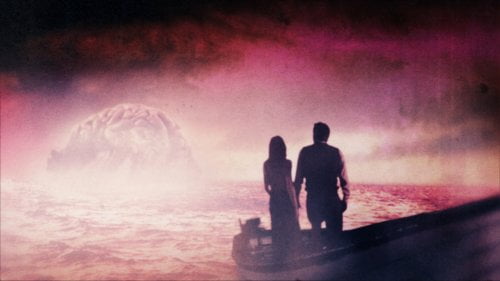 Crazy Canuck Guy Maddin recreates lost silent and exploitation films beginning with a louche instructional in how to take a bath, down the drainpipe into a submarine, out the hatch into the woods to rescue Margot from being sacrificed to an angry volcano. Slipping from adventure to the tales of a man obsessed with bottoms (Udo Keir!) and squid theft as if moving through one of Terry Gilliam's duct animations for Monty Python's Flying Circus, you never know where you'll head next in "The Forbidden Room."

Even admirers of Guy Maddin's twisted retro auteurism may be surprised by his latest, surely his looniest, most entertaining film to date. Working with co-director Evan Johnson, who attended to the technological challenges of working with Two-Strip Technicolor and effects, Maddin also has his starriest cast to date - in addition to Keir, the film features Mathieu Amalric, Maria de Medeiros, Charlotte Rampling, Geraldine Chaplin and Elina Löwensohn among a large cast of lesser known but no less entertaining thesps. "The Forbidden Room" is like a mad scientist took every lost celluloid oddity and serial adventure and threw them into a mixer where they exploded and frothed over in a delirious cinematic dream. Maddin's title cards alone (his film mixes spoken dialogue with silent style cards, sometimes in the same scene), with their flowery, archaic innuendo, provide more belly laughs than most commercial comedies. The film is the offshoot of Maddin's Seances project, in which he proceeded with a list of lost films to recreate (cowritten with Johnson and Robert Kotyk) and shoot live at Montreal’s Phi Center and The Pompidou Center in Paris, sometimes having as little to inspire as a title. Each film has a unique but unifying look - when we get to Holstein Schleswig, for example, it's like viewing a snow globe. A flickering animation of morphing stills provides an announcer for 'The Final Derriere,' Sparks's ballad recounting Keir's predicament. There is amnesia, trials of finger snapping, skeleton orgies, a vampire whose footsteps become louder as he walks away and more silent as he nears and a train that runs from Berlin to Bogota. And let us not forget the Aswang Banana or the dream of a moustache! "The Forbidden Room" is absurdly funny and wittily silly as it embraces a lost history of movies. Maddin is like a film academic crossed with a child's wild imagination and his partial sets of mismatched antique toys. 'Currycomb the fatigue from my Dutch Geldlander!' Grade:

A submarine, the S.S. Plunger, is stranded beneath the sea, unable to surface. The crew is running out of air and they consume flapjacks, which have a lot of air bubbles, as they try to resolve their dilemma. Miraculously, a woodsman appears on board and the terrified crew must search their deepest fears to survive in “The Forbidden Room.” Guy Madden’s films are not the kind to have audiences lining up around the block, eager to see them. But, he is a mesmerizing filmmaker who, with “The Forbidden Room,” tells a strange story about a marooned submarine crew that roam beneath the see, unable to get to the surface. But, do not expect Madden to tell a linear story with a beginning, middle and end – though his latest oeuvre has those qualities, in its own way, as the trapped submariners face their fears. But, there is a lot more going on in this bizarre work than the tale of the put upon mariners. The woodsman is also on a mission to save the beautiful Margot, who is not what she seems. A skull faced man and his femme skeletons tempt the woodsman from his mission. He must stand trial before the notorious Red Wolf tribe and prove his bravery and loyalty – key to his plans to save Margot. And, we keep coming back to the beleaguered sailors. Fans of Guy Madden are going to have a good time getting into that unique filmmakers mind, even for a little while (although the idea of spending time in that strange mind would make my head hurt). Still, if you like unusual filmmaking that is surreal and makes you say “WTF” (in a good way), keep an eye out for “The Forbidden Room” – a must for GM fans.