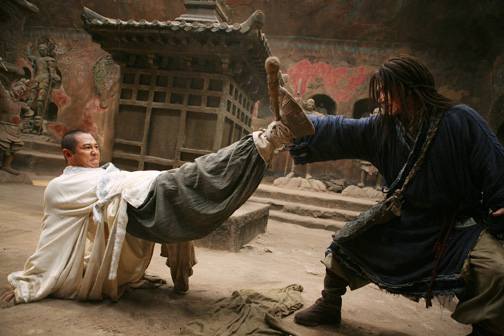 Jason Tripitikas (Michael Angarano, "Snow Angels") is on his way home with new bootleg kung fu movies when some South Boston toughs force him to gain them access to the Chinatown shop of his good friend Old Hop. Once inside, Jason tries to repair the damage by grabbing an antique fighting staff and battling them off. But he tumbles from a rooftop and comes to still clutching the weapon inside the hut of a Chinese peasant family just before the village is attacked by the army of the Jade Warlord (Collin Chou, "The Matrix Revolutions," "Jet Li's Fearless") in "The Forbidden Kingdom."

The first film to pair legendary martial artists Jackie Chan ("Legend of the Drunken Master," "Rush Hour 3") and Jet Li ("Hero," "Unleashed"), "The Forbidden Kingdom" is a West meets East mashup which features three different fighting styles in a story, written by John Fusco ("Young Guns," "Hidalgo"), based on the Chinese legend of the Monkey King, the founders of kung fu principles and the same types of movies Jason loves. There's also more than a little of "The Wizard of Oz" at play in this family martial arts flick that even my eighty-one year old mother enjoyed. As Jason flees from the soldiers who've singled him out, he finds the drunken poet, Lu Yan (Chan), who turns out to be an immortal kung fu master (and capable of speaking English, as are the other major players here, an irritating inconsistency that is given no explanation even as the film continues to revert to subtitles). It is Lu Yan who explains how the Jade Warlord was not as amused as the Emperor when the Monkey King crashed the Peach Banquet and how he tricked him out of his fighting staff during a duel, leaving him imprisoned within a statue these past five hundred years. Jason is now holding the weapon which Old Hop said had been awaiting return to its rightful owner since his grandfather owned the shop and must get it back to the Monkey King atop Five Elements Mountain. The duo pick up a third travelling companion after battling Jade soldiers at an inn (reminiscent of Zhang Ziyi's bust out in "Crouching Tiger, Hidden Dragon") when Sparrow (Yifei Liu) arrives with three horses, and a fourth, the Silent Monk (Li) after he swipes the staff from Jason (the occasion for an extended and satisfying duel between Chan and Li). When Lu Yan is wounded, though, Jason learns he is not immortal after all and defies the plan of the monk, and indeed, their mission, to ascend the mountain on his own and confront the tyrannical Jade Warlord. The film is stunning to look at, beginning with a Monkey King sequence set in the clouds featuring acclaimed action choreographer Woo-Ping Yuen's ("The Matrix" and "Kill Bill" series) wire work. Director of photographer Peter Pau ("Crouching Tiger, Hidden Dragon," "Shoot 'Em Up") is a master at capturing the action as well as the beauty of various China locales, including a bamboo forest. Costume design by Shirley Chan is also notable from Lu Yan's dreadlocked dishabille (the Scarecrow crossed with the Cowardly Lion?) to the White Witch's (Bingbing Li, "Purple Butterfly") flowing locks, silken robes and accessorized bullwhip and the ornate golden armor of the Jade gang. The ever-impish Chan is perfectly suited to the wine-reliant wanderer and his agility still impresses at 50+. Jet Li, who specializes in more serious roles, gets to maintain that persona with his Silent Monk while branching into comedy as the chittery Monkey King. Jason may not be the most compelling character Michael Angarano has played, but he holds his own with the physical demands of a kung fu student with two masters and a horde of enemies. Director Rob Minkoff ("The Lion King," "Stuart Little") does some adept juggling and gets fine support from his Chinese players, but his South Boston bully is a central casting catastrophe. And back to that "Wizard of Oz" comparison - in "The Forbidden Kingdom," a teenager is knocked out and awakens in a different world that features a person from back home in his new adventure. He is joined by three who each have their own agenda in travelling to a hilltop fortress accessed by a bridge across a deep gorge. They are impeded in their travels by a witch and minions sent from the palace. They almost do not make it across one landscape (a desert vs. a poppy field) until water comes into play and they spy their destination just ahead. In the end, when the hero is asked what he wishes, he just wants to return home. It's almost a subliminal Western framework making Eastern premises accessible to whole new audiences. It should be noted that the film's dual roles (one from Boston to China, another from Jason's China to five centuries earlier) are linked more ingeniously than "Oz's" dream, providing a couple of closing winks from the filmmakers. "The Forbidden Kingdom" is a unique blend that offers something for everyone while respecting its origins. It's a lot of fun.