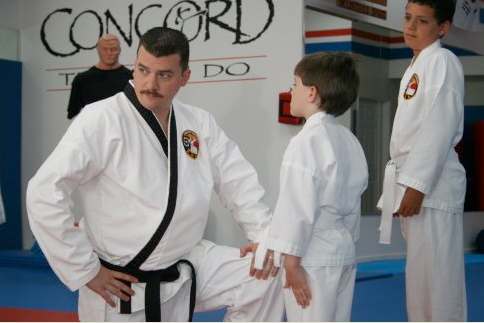 Fred Simmons (Danny R. McBride) was a Tae Kwon Do champion years before but now runs a martial arts school in a small town. Being the big fish in a small pond gives him delusions of grandeur, though, and he places himself on the same level as his hero, Chuck The Truck” Wallace (Ben Best). When his wife, Suzie (Mary Jane Bostic), admits to an affair, Fred’s life is ruined, he is a basket case and in danger of losing everything. He must pull himself up by the bootstraps to get his life back in “The Foot Fist Way.”

"The Foot Fist Way" certainly accomplishes what it set out to do - feature adult males with unwarrantedly out of control egos who somehow become more like real men after an encounter with their hero, the equally jerky Chuck the Truck. The film's something like the "Spinal Tap" of Tae Kwon Do movies except none of the adults are likable. Check out Mary Jane Bostic as Fred's hilariously slutty wife Suzie. Director Jody Hill, who costars as Fred's delusional and weird buddy Mike McAlister, maintains his odd tone throughout and caps off the news that Fred's been cuckholded with one of the funniest camera moves since the Coen Brothers floated over a drunk in "Blood Simple."

This is a goofy, inexpensive comedy that looks its budget but has a lot of heart, particularly due to the sympathetic unlikability of its star and co-writer, Danny McBride. The script, by McBride, director Jody Hill and co-star Ben Best, is set in chapters taken from the Tae Kwon Do student oath ­ Courtesy, Self Control, Perseverance, Integrity, Indomitable Spirit ­ each of which Fred is lacking. But, Fred’s life is in for a lot of turmoil when he finds out his sexy wife, Suzy, cheated on him with her boss and, worst of all, his years long hero figure, martial arts star Chuck The Truck” Wallace, is not the spotless idol he thought. This is a story about the arrogant, full of himself, selfish and not-too-bright Fred, who is a legend in his own mind. His good, safe life unravels and his business falters as he loses all of the control for which He thinks he is famous. His downward spiral is amusing, if predictable, and his redemption not new, either, but the filmmakers do get laughs from the material. Not many but enough to garner business for those of us who want leave our brain at the door humor. Things like beating the bejeezus out of a ten-year old student make you laugh for the extreme un-PC behavior of Fred. The Foot Fist Way” amuses as you watch but does not have the shoulders to last long in your mind after leaving the theaters. Still,