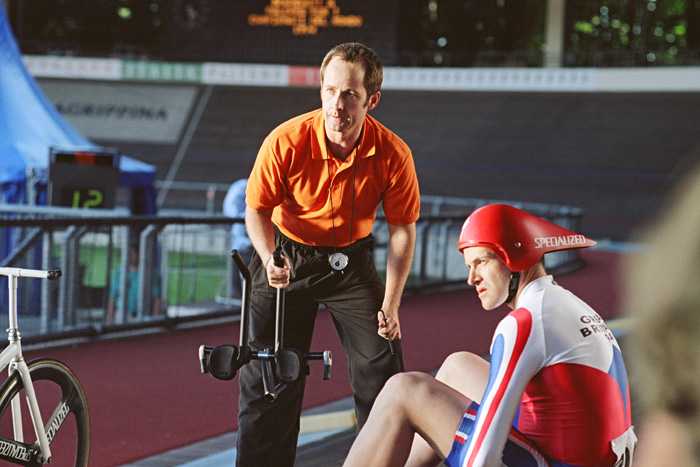 Bicycling enthusiast and former racer Graeme Obree (Johnny Lee Miller) has a dream: to be the world’s fastest cyclist. Without backers, sponsors or money, he builds a bike of his own radical design and sets off to make his dream a reality in “The Flying Scotsman.”

Persecuted by bullies as a youngster, Graeme Obree (Jonny Lee Miller, "Trainspotting," "Melinda and Melinda") became a top notch amateur bicyclist after his policeman dad gifted him with the bike that became his getaway vehicle. As an adult, Graeme made ends meet as a messenger while he tried to get his beloved bike shop off the ground, but when that failed he turned his energies towards competition. His astounding feat of breaking the long-standing one hour record with a bike concocted from scrap and his wife's washing machine earned him the moniker "The Flying Scotsman." Amazing sports stories have always been fodder for film treatments, but creating something fresh from them appears to be becoming increasingly difficult. Last year's similar tale of an amateur with a wrench riding on to glory, "The World's Fastest Indian," benefited from a charming performance from Anthony Hopkins and the experience of helmer Roger Donaldson, but British television director Douglas Mackinnon and writers John Brown, Declan Hughes and Simon Rose have created something more akin to last year's other Glaswegian athlete tale, "On a Clear Day" - a pleasant enough but not particularly enthralling film. Obree takes on fellow deliveryman and buddy Malky (Billy Boyd, "The Lord of the Rings's" Pippin) as his manager and gets inspirational advice and the use of a workshop from local minister Douglas Baxter (Brian Cox, "Running with Scissors," "Zodiac"). Keeping things all in the family, Malky strikes up a hesitant relationship with Anne Obree's (Laura Fraser, "Titus," "A Knight's Tale") friend Katie (Morven Christie), who guides him towards sponsorship dollars. When Obree's time comes to travel to Norway's Hamar Velodrome to attempt his first professional record, Malky pays his own way so that Anne can take the trip. After a Herculean effort on a real bike makers' copy of 'Old Faithful,' Obree fails to break the record, so he attempts something even more difficult - a second try less than twelve hours later with a battered body and his original bike (rebuilt overnight by Malky). His success brings a media storm, but also gives Malky his first look at a long standing setback - the crippling depressions which Obree has suffered for years. But Obree persists, entering shorter term races even as the World Cycling Federation tries to keep the upstart out by outlawing his outlandish cycling positions. The filmmakers are to be commended in the subtlety with which they introduce Obree's depression, gradually building to suicide attempts and the surprisingly knowing council of Baxter, but they frequently fail to clarify the events Obree competes in (he starts a race, he wins!) nor do they explain a seeming rift between Obree and his dad. The cast is serviceable, with Miller quite convincing as an athlete and depressive, but the sparks Hopkins generated with his support in "Indian" are missing. "The Flying Scotsman" opened last year's Edinburgh Film Festival where it was admired by its subject, but the film is too specialized in subject and too ordinary in execution to attract much attention outside the cycling circuit. Even Scotophiles won't find much distraction here.

This is yet another inspirational, man overcomes impossible odds sports flick that offers little more than wearing its heart on its sleeve. Graeme was once a formidable bicyclist who, on more than one occasion, crossed the finish line first against 1992 British Olympic gold medalist Chris Boardman. But, his mental illness prevented him from continuing to compete in world class cycling. Now, his bicycle repair shop is about to close and he is near bankrupt. A fortuitous visit from a bicycling minister, Rev. Douglas Baxter (Brian Cox), whose antique bike broke down nearby, gives Obree the inspiration to get back on his metaphorical bicycle after he fell off. The bicycle repairman is also an inventor and natural engineer and he sees, in his mind, a revolutionary way to improve the competitive racing bicycle. Using the reverend’s well-equipped tool shed, Graeme puts his ideas into practical and tangible form and he invents a revolutionary new cycle. Meanwhile, he trains his heart out and prepares himself and his bike for a shot at the one-hour world distance title. His wife, Anne (Laura Fraser), and best friend, Malky McGovern (Billy Boyd), faithfully support Obree as he faces official and corporate discrimination against his radical machine. Graeme, with a bicycling enthusiast backer, takes on each strike against him, persevering until he lives his dream. Aside from the angst Graeme experiences trying to overcome his illness (which is given only cursory attention), there is really nothing new about “The Flying Scotsman.” Its derivative nature kept recalling to mind the much better “The World’s Fastest Indian” with Anthony Hopkins. This production, though, is handled routinely when compared to the more exciting Indian.” The Flying Scotsman” is aimed at a narrow niche – bicycle fans that like overcome-the-odds, inspirational sports film.