The Flowers of War 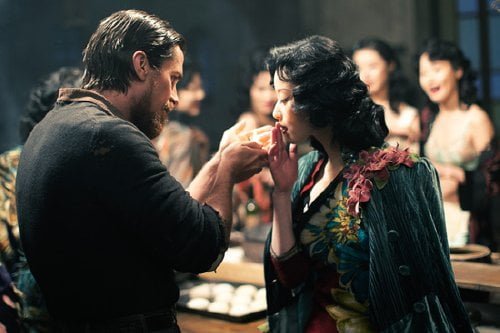 American mortician John Miller (Christian Bale) got stuck in China when the Japanese invaded and laid siege to the capital of Nanking. Seeking sanctuary in a Catholic cathedral, he finds a young boy, George (Tianyuan Huang), protecting a group of schoolgirls from the convent and they are soon joined by the courtesans from a famous local brothel. Miller must make the choice between saving his own hide or try to get the girls and woman to safety in “The Flowers of War.”

When iconic filmmaker Zhang Yamou makes a movie I come to expect a great combo of a first rate story, excellent production and look and top notch acting. “The Flowers of War” has the production part right but the story is stodgy and the characters almost all two-dimensional, including Christian Bale. The one exception is Tong Dawei as Chinese army commander Major Li. With nary a word spoken, Li’s fighting skills and his humanity come out and he is the only character I really rooted for. Christian Bale never seems comfortable in the role of the protector and savior of the girls and woman under his care. John Miller moves between happy go lucky drunk to hero figure who poses as a priest and stands up to heavily armed Japanese soldiers. I believed neither side of the character and Bale gives a flat performance. The schoolgirls and courtesans are interchangeable and none, except star Ni Ni as the number one lady of the evening, has any real personality. It is a case of just too many characters in the ensemble, making each diluted and sketchy. Because of this, it is hard to form empathy for so many. The execution of the story set at the height of the Japanese rape of Nanking is lopsided with the bulk of the film attempting to focus on the various characters. It is about two hours in before the film gets to its point so the finale, which should have been more drawn out. It is just wham bam thank you ma’am, the end. The balance of stories is missing with too much time spent on the unnecessary romance between Bale and Ni Ni. Attention to details, like the uniforms and equipment of the Japanese and Chinese soldiers, is done with lovely accuracy, making production the most notable quality of “The Flowers of War.” Cinematography, by veteran lenser Xiaoding Zhao, is up there with production. Directing, though, is stilted but that could be the fault of the story trying to do too many things with too many characters. A better, and more gripping, film about the Japanese rape of Nanking is last year’s superior “City of Life and Death.”