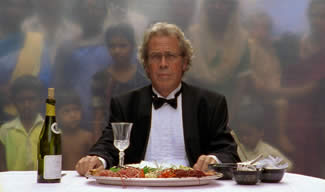 Director Lars von Trier ("Dogville"), Danish enfant terrible and founder of the Dogme '95 movement, throws down yet another filmmaking gauntlet, this time directly to a filmmaker he has long revered, Jørgen Leth. Von Trier has repeatedly watched Leth's 1967 short, "The Perfect Human," an experimental behavioral documentary. The two filmmakers codirect their own new documentary in which von Trier requests that his friend remake this film five times, each time restricted in some way by von Trier's devilish ideas in "The Five Obstructions."

This amazing film will be a boon to von Trier fans, fans of experimental film and students of film everywhere. This clash of wills results in philosophy, artistry and psychoanalysis - call it the filmmakers' version of Sun Tzu's "The Art of War." Von Trier's Zentropa studio offices are the film's home base where von Trier meets with Leth to kick off the project and meet after each new edition of "The Perfect Human" is ready to be viewed. Von Trier's first obstruction is that Leth must have no edit greater than 12 frames of film (which translates to 1/2 sec. of film), have no set, and, due to a cigar being smoked at the time, be filmed in Cuba. Von Trier exults that Leth has 'a perfect little film, now we're going to destroy it!' Leth returns with a remarkable piece of work that clearly repeats his original themes but couldn't be more different with its distinctive Cuban rhythms. Von Trier is trumped - his diabolical 12 frame rule has been turned into 'a gift.' Now he says he wants to 'banalize' Leth and Obstruction #2 is that he should go to 'the most miserable place' yet not show it. Leth is also tasked with being the perfect human. In perhaps the challenge's best result, "The Perfect Human: Bombay," Leth, attired in a tux, eats an elaborate meal in front of a transparent screen on Falkland Road, Bombay's horrific red light district which had given Leth nightmares years before. (Each segment only highlights certain aspects of the remade film - one can only hope for a dvd release which will include the original and its five remakes along with the documentary.) Von Trier cries foul, saying that Leth has indeed shown his setting while Leth says he merely interpreted von Trier's rule in his own way (ironically the screen symbolizes von Trier's observation that Leth's films keep one at a distance). Von Trier says Leth must be punished, by either returning to Bombay and doing it again or remake it this time with complete freedom, something which clearly presents Leth with a greater challenge than von Trier's dogme-like rules. Obstruction #3 finds Leth in Brussels, excited about hiring Patrick Bauchau, star of Eric Rohmer's "La Collectionneuse." The resulting film is a cool blue Euro-art piece. This segment, both in our watching behind the scenes (Leth standing in a hotel corridor for an inordinate amount of screen time) and the final result, is perhaps the least satisfying, but once again von Trier is rightly frustrated in his inability to cause Leth to make a bad film, something which he is obviously hoping to happen. And so, Obstruction #4 is to work in a medium both von Trier and Leth dislike - animation. 'I can't believe this won't be crap,' says Lars. "The Perfect Human: Cartoon," is, as we have come to expect, brilliant, at least in the glimpses shown here. When we see Leth in Austin, Texas, one presumes he has contacted "Waking Life's" animator and indeed, it is Randy Cole who is credited in this segment. Lars admits he likes the MTV-like piece. Obstruction #5 goes farthest afield of the series' theme when Lars insists Leth narrate words that von Trier has written ('The Perfect Filmmaker' would be the tie here). The amazing finale ends the film with no final discussion. Leth begins as himself in the black and white "Avedøre, Denmark" short with 'Dear silly Lars, you thought you could trip me up.' Von Triers words expose himself as a man riddled with doubt about what he creates. As he has assumed kinship with Leth, he thought he could break the man down to find the same, but no. 'My films are a bluff,' Leth says, speaking von Trier's words only to counter with 'It's the attacker who exposes himself.' Heady stuff and brave of von Trier to lay himself bare while Jørgen Leth's achievements tower. Even though Jørgen's words are harsh at the end, one never gets the sense of a broken friendship. In trying to goad Leth to his 'inner scream,' and 'liberate' himself by making crap, von Trier has instead given his friend a global stage as a highly creative and assured filmmaker.