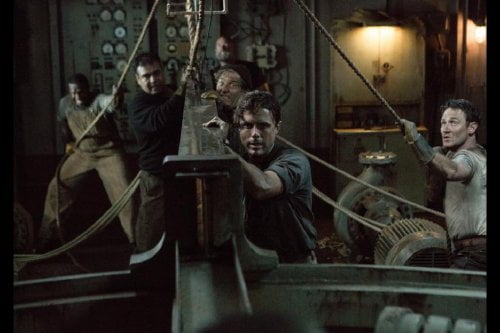 When a ferocious N'oreaster hit the New England coast in February, 1952, it ripped two 500 foot oil tankers in half. Newly appointed Chatham Coast Guard Station Chief Daniel Cluff (Eric Bana), a Southerner, tried to direct his senior crew to cross Chatham Bar to reach the SS Fort Mercer, but they refused, leaving from a safer point. But when Cluff learns about the second ship, Coast Guard coxswain Bernie Webber (Chris Pine) follows his orders with three volunteers during "The Finest Hours."

You may wonder just why a sixty year old rescue mission merits a motion picture in 2016, but this thoroughly old fashioned tale of a community coming together, many risking their lives for endangered strangers, and, in SS Pendleton's chief engineer Raymond Sybert's (Casey Affleck) case, ingenuity under stress, is a reminder of what Americans are capable of at a time when the country is harshly divided. Director Craig Gillespie ("Lars and the Real Girl," "Million Dollar Arm") doesn't get everything right. The actual rescue is anticlimactic after the events which precede it and the aftermath features a bit of condescending audience instruction. But he's gotten fine, understated performances from his two leads and achieves a charming yet atypical romance between Pine and Holliday Grainger's ("Cinderella") assertive Miriam. "The Fighter's" screenwriters Scott Silver, Paul Tamasy and Eric Johnson (adapting the book by Casey Sherman and Michael J. Tougias) begin the tale with the beginnings of that love story as Bernie and his buddy Gus (Beau Knapp, "Southpaw") meet Miriam and Gus's girl at a local watering hole. Bernie's the youngest in a family of brothers who all served in the war and he's a humble, quiet nice guy, tongue-tied at his first sight of the girl in the 'bear' coat. When it's learned she's never been on a boat, Bernie gallantly approaches a local fisherman to see if he can borrow one, but Carl (Matthew Maher, "Gone Baby Gone"), a local sitting at the bar, has unkind remarks about a failure in Bernie's past. Miriam's set on the handsome guy, however, so much so that she asks him to marry her, a proposal he awkwardly backs into (and catches macho flak over). When the snow begins to fall, Cluff seems a out of his league. Fitz (Kyle Gallner, "American Sniper") is trying to fix their radar, which is picking up more information than they expect. Out at sea, we witness the incredible destruction of the S.S. Pendleton, those in the ship's stern witnessing the sinking of its bow, complete with its captain, most of its crew and radio equipment. Sybert, unpopular because of his loner tendencies, knows that to stay afloat, they need to keep their pumps running. He also believes their best chance is to ground the remains of the ship, possible with a makeshift tiller. When Tchuda (Josh Stewart, "Transcendence") convinces the men to abandon ship, Sybert proves the idea's insanity, releasing a lifeboat which is immediately dashed to pieces in the heaving seas. It is Carl who hears the Pendleton's distress signal, catching a glimpse of something too far afield of the troubled Mercer. His report results in Cluff instructing Bernie to head out. Seaman Ervin Maske (John Magaro, "Carol"), waiting for transport to a lighthouse, volunteers, followed by Richard Livesey (Ben Foster, "The Messenger") and Fitz. Gillespie intercuts between these four, piloting their small CG36500 lifeboat through a situation so hazardous, it's miraculous they got through with only the loss of their windshield, compass and a hat, and the thirty-three men fighting to keep the Pendleton's stern afloat. These tension-filled heroics are mind boggling. Back in Chatham, Miriam demands Cluff recall her fiance, then storms out to get stuck in a snowbank, saved by Carl's sister, Bea Hansen (Rachel Brosnahan, TV's 'Manhattan'), the widow of a man Bernie'd failed to save the year before, a bit of drama that stretches credulity given the hard to believe truth at sea. Special effects are good, although the action they are in service to is at times muddled. Period production feels true to its time and place, some scenes shot on location in Chatham. Pine's understated playing and Affleck's solemn calm suit the time as well, Grainger's unconventional forthrightness adding spark. Carter Burwell's score is unmistakable with its French horns adding wistful romance to onshore drama, darker and more foreboding out at sea. "The Finest Hours" ends with a tribute to the men who performed what is still considered the most daring Coast Guard small boat rescue. They all returned, along with thirty-two rescued men, in a boat designed for twelve. Grade: