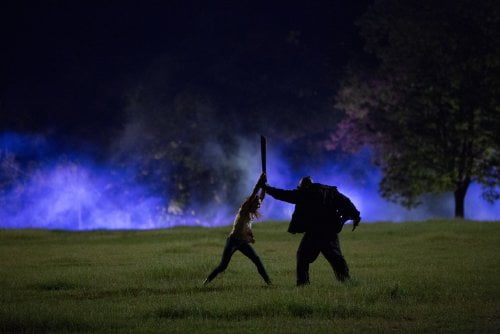 Max (Taissa Farmiga) and her friends are invited to a tribute screening of the classic 1980’s horror movie, “Camp Bloodbath,” starring her late scream queen mom, Amanda (Malin Akerman). Things get weird for the travelers when they find themselves inside the movie they just saw. Just like the fictional victims of the masked, machete-wielding madman, the intrepid group must put their wits together to survive in “The Final Girls.”

Three years after the death of her struggling actress mom Amanda (Malin Akerman, "Watchmen," "I'll See You in My Dreams"), Max (Taissa Farmiga, TV's 'American Horror Story: Coven') is begged by Duncan (Thomas Middleditch, HBO's 'Silicon Valley') to appear at a campus anniversary screening of her mother's most enduring role, that of an 80's scream queen in "Camp Bloodbath." Max reluctantly agrees, but when a raging fire engulfs the theater she machetes her way through the screen to escape and she and her friends find themselves within the movie they were just watching in "The Final Girls." Screenwriters Joshua John Miller & M.A. Fortin have come up with a twist on the meta-horror movie that gave us films like "Scream" and "The Cabin in the Woods." Director Todd Strauss-Schulson ("A Very Harold & Kumar 3D Christmas") milks it for every knowing wink at the genre's filmmaking tropes while grounding it with a truly moving theme of grief and letting go. "The Final Girls" is a lot more clever and inventive than one might expect. After kicking off with a trailer of the fictional film, we're thrust into a flashback showing what a terrific mom Amanda was, and how much her career was haunted by her early slasher film. Once Max, her upstanding boyfriend Chris (Alexander Ludwig, "The Hunger Games," "Lone Survivor"), Chris's bitchy ex Vicki (Nina Dobrev, TV's 'The Vampire Diaries'), Duncan and Aunt Gertie (Alia Shawkat, "Cedar Rapids," TV's 'Arrested Development') realize where they are, Max begins to wonder if she can save her mother from Bloodbath's homicidal masked maniac Billy Murphy (stuntman Dan B. Norris). After the film's yellow VW van has circled up to the group for the umpteenth time (on a cycle reflecting the movie's running time), they accept slutty Tina's (Angela Trimbur, "The Kings of Summer") offer of a ride. Max gets tears in her eyes as soon as 'Nancy,' her mom's character, sits up in the back seat. Nancy tries to comfort her, mistaking her tears for homesickness, an unexpectedly lovely bit of writing and acting that sets the film's dual tone. But when Nancy confides in Max that she's planning on losing her virginity to egotistical horndog Kurt (Adam DeVine, TV's 'Modern Family,' "The Intern"), Max is determined to stop the fateful deflowering. The filmmakers have a field day playing with flashbacks, slo-mo, set design, title cards and "Friday the 13th" musical cues while the group tries to subvert the film while also playing into it. But at some point their presence begins to adversely affect "Camp Bloodbath's" natural order and when the long awaited 'final girl' Paula (Chloe Bridges, TV's 'The Carrie Diaries') finally makes her appearance it's distressingly short lived, making her role up for grabs. When one realizes where the movie's headed, it seems impossible to pull off, but Strauss-Schulson lands it perfectly. The beautifully assembled cast is solid, standouts being Akerman and the ever reliable Shawkat, whose reactions to Middleditch's ad libs are priceless. Cast against type, Dobrev is capable of making us dislike Vicki then turn it all around. Farmiga is saddled with a straight (wo)man role, but she's a solid center and conveys Max's loss. Grade:

Director Todd Strauss-Schulson, with the screenplay by M.A. Fortin and Joshua John Miller, creates a clever spoof on the seminal classic horror flick, “Friday the 13th (1980).” Parody is a hard thing to pull off well but the makers of “The Final Girls” put enough comedic spin on the source material to get more laughs that I would expect. During the tribute screening of “Camp Bloodbath,” a freak accident and the theater catch fire. Desperate to escape the conflagration, Max and her friends cut their way through the movie screen to escape to safety. They all awake in the woods when the VW bus carrying the counselors heading to their doom at Camp Blue Finch. Then, 92 minutes later, the encounter is repeated, and repeated again. Max’s friend, Duncan (Thomas Middleditch), is the first to figure out they are not just watching the movie, they are in the movie! The revelation, at first, is thought to be benign and poses no danger to the visitors. After all, they are merely outsiders to “Camp Bloodbath” and therefore safe, right? Soon, though, they discover that it is not a movie but for real and Max and her friends must fight to survive and stop the monster that is killing them. (His name is Billy and he is strikingly similar to Jason from “Friday the 13th, except, in the first of that franchise, Jason was, in reality, his mother, Mrs. Voorhees (Betsy Palmer)). The spirit of “The Final Girls” stems more, as such, from the franchise than from the original. The ensemble cast does a fine job of depicting the victims from the 1980s slasher films where promiscuity and death walk hand in hand. It is up to the outsiders, now insiders, to figure out how to destroy Billy before he does them in. The members of quintet are eliminated one by one and it falls on Max’s virginal shoulders to save the day. “The Final Girls” should have been released during the summer when such fare would get more box office, so there is a limited market now as the industry gears up for the year end awards race. But, it has enough going for it to be a hit on VOD and beyond for fans of the genre.