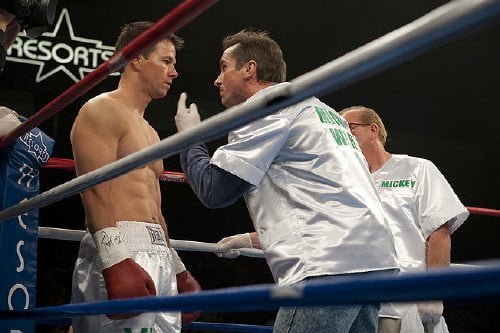 Dickey Eklund (Christian Bale) was the pride of blue collar Lowell MA and seemed destined to be a champion in the ring. But, after a humiliating defeat by Sugar Ray Leonard, he descended into a life of drugs and crime and goes to jail. His younger half-brother Mickey (Mark Wahlberg) takes up the banner dropped by Dickey and “Irish” Mickey Ward becomes “The Fighter.”

In 1973, Dicky Eklund (Christian Bale) knocked down Sugar Ray Leonard on an HBO broadcast fight and became 'The Pride of Lowell.' But he followed up his boxing success with a crack cocaine addiction and runs in with the law. His younger brother, Mickey Ward (Mark Wahlberg), followed in his footsteps but kept hitting shy of the big time. It took a new girlfriend, local bartender Charlene (Amy Adams, "Enchanted"), to recognize the bad influence of Mickey's family and set him on the path to becoming "The Fighter." David O. Russell ("Three Kings"), who hasn't made a feature film since 2004's "I Heart Huckabees," picks up the directing reins from Darren Aronofsky (who exec produced) and delivers, if not a knockout punch, a solid win with this family/sports drama. As matriarch Alice Ward, Melissa Leo ("Frozen River," "Conviction") gives a feisty, blue collar mother bear of a performance supported by her Greek chorus of seven big-haired daughters, while Amy Adams shows us a completely new side, the tough one. Bale is a hollowed out jitter and Wahlberg, the quiet, stabilizing center. The film opens with a bookending 'interview' with the two brothers, then cuts directly to one of the main roots of Mickey's problem. As a documentary crew follow, Mickey waits in the ring at the gym for his brother to show up to train him. Eventually Lowell cop Sgt. O'Keefe Eric Johnson steps in. Meanwhile, back at the crack house, Dickey's buddies remind him of his 9 a.m. appt. - at 11:45. His car 'missing,' Dickey races to the gym on foot. Mom refuses to denigrate her elder son. After obtaining a date with the beautiful Charlene for the following weekend, Mickey travels to Atlantic City where two significant things happen. His intended challenger is pulled due to the flu and he's offered another fighter with twenty pounds on him. His manager mom and trainer brother insist he'll do fine. Mickey agrees so that everyone will get paid, but he's pummeled in the ring. But he's had an idea planted in his head by big fight promoter Mike Toma (Ross Bickell, "Major Payne"), who offers him paid training in Las Vegas with Mike Tyson. And as written by Scott Silver ("8 Mile"), Paul Tamasy ("Air Bud") & Eric Johnson, here is the film's central conflict - family loyalty vs. actual career advancement. Mickey's been dubbed a 'stepping stone,' one of those fighters good enough to boost the career of an opponent, but one who's own shot is behind him. When Mickey returns to his depressed Massachusetts mill town with his tail between his legs, Charlene forces a confrontation and makes an astute assessment. Dickey proves her right when, promising to find training money for his brother, ends up arrested on a long string of charges. This is a more straightforward film than we've gotten from Russell in the past, but it's far from the typical inspirational sports movie. The family dynamics at play are deep, dark, loving, egotistical, controlling and often funny. It's not spelled out, but the brood of nine are from two different fathers and Alice's current husband George Ward (Jack McGee, "21," "The International") has more of a prince consort role until he makes an interesting and very strong political play. Much of the cast, including many of the seven sisters, are Lowell locals (look for Conan O'Brien's sister - immediately recognizable - as 'Beaver'), and this is but one way Russell has assured honest local flavor. Boston area accents are notoriously difficult and this cast is mostly right on (Amy Adams slips once, pronouncing the 'r' in bar, and it jumps out amidst her own and everyone else's diction). Costume, particularly Leo's attention grabbing ensembles, contributes to time and place. The film was mostly shot on location in Lowell and that decision paid off as well, the former mill city in decline a perfect backdrop, the new Cambodian influx into an old Irish citizenry neatly noted. Even the local music of the time is well represented (Til Tuesday's 'Voices Carry,' Aerosmith's rather literally used 'Back in the Saddle'). The fight scenes aren't in "Raging Bull's" league, but Russell and his cinematographer Hoyte Van Hoytema ("Let the Right One In") accentuate what made Mickey Ward different, and what made him different was a strategy that was not necessarily the sexiest to film. Wahlberg trained for four years while this film changed gears in preproduction and looks fight ready. Bale's got the showier role and his gaunt high-wire act evolves into something more sturdy that still shows the scars of a hard lived life. "The Fighter" has a little bit of everything - sports, dysfunctional family, crime, comedy, heart. David O. Russell's made a Boston movie that passes local muster and his direction of a mix of professional and non-professional actors has resulted in one of the best acting ensembles of the year. Stick around for the ending credits to see footage of the real Mickey and Dickey.